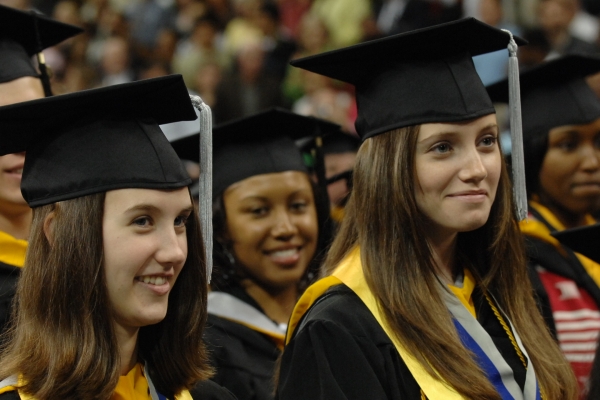 Hail to thee our Alma Mater
Blue and silver, hail!
By the ocean's billows flying
See them proudly sail!
University, young and strong,
We lift our voices in this song
This our song of Alma Mater,
Old Dominion, hail!
Words and music composed by Robert Jager '70, '74

The commencement exercises are steeped in tradition. Each element of the ceremony has a meaning. Having an understanding of the various elements of the exercise will help you fully appreciate commencement. Please review the following information on the traditions associated with commencement at Old Dominion University.

Whether the origin of academic dress was ecclesiastical or secular is a moot point; its history extends into antiquity.

In general, there are three different academic gowns which represent the attainment of the bachelor's degree, the master's degree, and the doctoral degree. The principle differences among the gowns are the sleeves and the trimmings. The bachelor's gown has long, pointed sleeves; the master's gown has long or short oblong sleeves; and the sleeves of the doctoral robe are usually trimmed with three black velvet bars. The doctoral robes are also usually trimmed down the front with black velvet though in some cases the trim is in the color representative of the subject in which the degree was earned.

The hoods of the three types of academic robes also differ, primarily in length. The bachelor's hood is usually three-feet-long; the master's hood is three-and-a-half-feet-long; and the doctoral hood, which is four-feet-long, may have side panels. For all hoods, the colors in the lining are those of the university or college at which the degree was earned.

The binding of the hood, seen at the throat and along the edges, varies in width for the types of hoods, and is usually velvet. The bachelor's binding is two inches wide; the master's, three inches, and the doctoral, five inches. The color of the hood binding is usually that of the last-designated discipline that is incorporated in the official title of the degree (e.g., Doctor of Philosophy, Bachelor of Science, Master of Science in Education.)

Colors associated with the subject vary somewhat at American colleges and universities. A partial list taken from American Colleges and Universities, 14th edition, published by the American Council on Education, has been adopted by Old Dominion University. 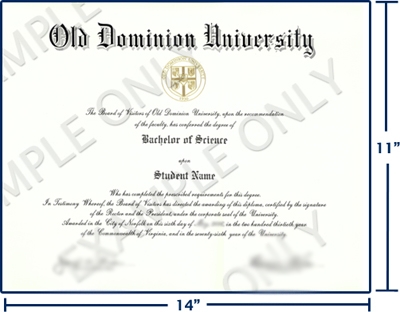 The diploma measures 14" wide by 11" tall. It bears the signatures of the Rector of the Board of Visitor's and the President of the University.

Only the degree earned by the student will be displayed on the diploma. Your specific major (if applicable) will appear only on your transcript.

Finally, the student's name, as submitted to the Registrar's Office, is printed on the diploma. This is the full legal name, no nicknames are allowed.

Diplomas are mailed to the student's permanent (home) address 6-8 weeks after the Commencement ceremony.

The Old Dominion University mace is carried by the University Marshal to lead the academic processional and recessional, and is displayed on the platform during ceremonial occasions.

A traditional symbol of authority used in official ceremonies at some of the nation's older colleges and universities, the mace was commissioned by the university for the inauguration of Joseph M. Marchello in 1985. Designed by William Wagner and made by Dianne deBeixedon, both associate professors of art, the mace features a silver head that is a three-dimensional evolution of the elliptically shaped University Medal. The shaft was crafted from Brazilian rosewood.

The medallion is worn by the president during ceremonial occasions, signifying the office of the president of Old Dominion University.

A slightly reduced replica of the medallion worn by the president is given by the authority of the president and the Board of Visitors in recognition of outstanding service that has brought distinction to Old Dominion University and furthered its pursuit of excellence in teaching, research and public service.

The original medal was authorized by the Board of Visitors in 1976 and first worn by Alfred B. Rollins Jr. at his inauguration as the university's third president. It was designed by Donald A. Borja, a 1969 graduate of the university. As he began his design, Borja sought to find the most significant relationship between the sculpture and the concept of continuance of higher education. The motif, therefore, is continuity.

Saturday
9:00 a.m. One Undergraduate Ceremony for all colleges