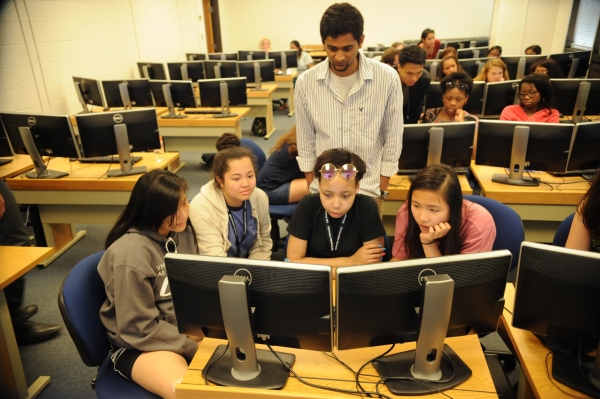 If you've driven by Old Dominion University this summer, odds are you've seen lots of students who look remarkably younger than the ones who usually walk across our campus.

More than 4,000 youngsters will attend one of our summer camps. If that conjures images of children having fun swimming or sharpening their soccer skills, you're partially right. Our Big Blue Summer Camps include outdoor adventure, arts and scavenger hunts, and our Athletics Department holds camps for sports including football, baseball and tennis.

But our summer offerings are also introducing youngsters to booming fields where ODU researchers have made significant contributions.

Our Virginia Modeling, Analysis and Simulation Center is offering a half-dozen week-long classes, such as "Introduction to Robotics" and "3D Modeling for Games," to eighth- through 12th-graders. The goal is to pique students' interest in the STEM (science, technology, engineering and math) subjects by highlighting the practical applications and learning by doing. In the robotics class, for instance, they construct and personalize their robots and get to take them home at the end of the camp.

For the first time, we are holding a GenCyber camp, part of a nationwide network of cybersecurity camps financed by the National Security Agency and National Science Foundation. This month, we will have two weeklong sessions for students in grades 8 to 12. They will learn about career possibilities in cybersecurity, take field trips to Navy Cyber Defense Operations Command and the Joint Expeditionary Base Little Creek, and play games to illustrate the dangers of hacking a poorly constructed password - a lesson many of us adults should learn.

The university is partnering with the Life Enrichment Center, which helps low-income students in Norfolk, during its six-week Urban Youth Camp.

The students will visit Old Dominion for two hours a day, three days a week. Among the areas they'll be introduced to: Old Dominion's nurse anesthesia program, planetarium and athletic training facilities. During a visit to the Ted Constant Center, they'll get a taste of how video demos are produced.

At our first ODU BLAST (Building Leaders for Advancing Science and Technology), 80 ninth- and 10th-graders spent three days here - and slept over for two nights - while learning how to survive, and even thrive, in the era of climate change and sea level rise. The program, co-sponsored by the Virginia Space Grant Consortium, of which Old Dominion is a member, covered such topics as the impact of light on the earth's temperatures and the consequences of water runoff. The students also conducted experiments in ocean warming and gathered data on risks posed by flooding and sea level rise.

This month, the university's Strome Entrepreneurial Center is holding three four-day Entrepreneurship Bootcamps for middle and high school students, in partnership with the Virginia Beach City Public Schools, Kempsville High School's new Entrepreneurship and Business Academy, and the Advanced Technology Center. When they're here, the campers will meet with some of our most successful student entrepreneurs, develop business plans and work with coaches to make a "rocket pitch" for 3D products that they will be developing.

These camps introduce the young students to some of our most talented professors and staff members and give some of them their first taste of life on a college campus. We hope the summer experience motivates these students to later enroll in college and pursue fields such as cybersecurity and entrepreneurship, which are so critical both to the region and the country.

Selfishly, we hope the best of them end up here. But even if they don't, their vision for their future will be enlarged while they enjoy a fun summer.