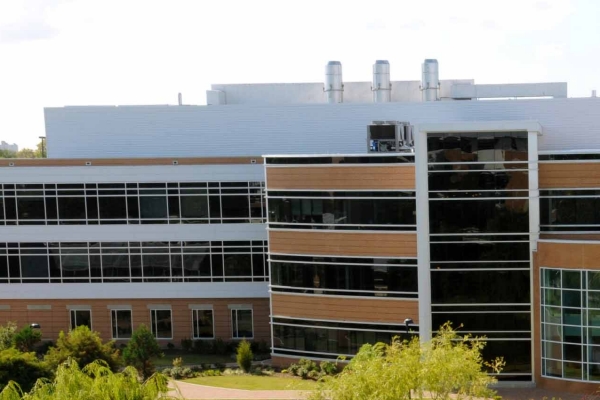 First established in 1969 as the Institute of Oceanography, the Department of Ocean, Earth and Atmospheric Sciences moved into a new building on the Old Dominion University campus in Norfolk in 1997. New facilities contain laboratories for biological, chemical and geological studies. In 1991, the Commonwealth Center for Coastal Physical Oceanography began operation in a building near the campus and houses all of the physical oceanography laboratories.

The Department maintains a 55-foot research vessel, the R/V Fay Slover. Smaller vessels, suitable for near shore investigations, are also maintained by the department. Research requiring larger vessels is made possible through the cooperation of such government agencies such as NSF and the National Oceanic and Atmospheric Administration. Old Dominion University is a member of CRC (Chesapeake Research Consortium), COL (Consortium for Ocean Research and Education) and an associate member of UNOLS (University National Oceanographic Laboratory System), and of the University for Atmospheric Research (UCAR).

Norfolk, Virginia is one of seven major cities comprising Hampton Roads, one of the world's largest major seaports. Norfolk is the center of this Eastern Virginia region and the hub of the world's largest natural harbor. It is a major center of research and development and a home for extensive scientific and technological activities in marine science, aerospace technology, ship design and construction, advanced electronics and nuclear physics. NASA-Langley, the birthplace of the space program, is located in Hampton, Virginia.

Jacques Simon Zaneveld served from 1959-1975 as a faculty member and Chairman of the Biology Department and founder of the Department of Oceanography. The interview discusses Zaneveld's background in the Netherlands, various research grants and projects, expeditions to the Antarctic (where the "Zaneveld Glacier" was established in his name), the development of oceanography at ODU, changes to the Biology Department, and environmental concerns.

I first met Jack Ludwick in 1966, when I was an assistant Professor at Dalhousie University in Nova Scotia, and he was head of Geological Research at Gulf Oil Research Laboratory in Pittsburgh. I answered a want ad and was invited to the laboratory for an interview. The meeting was pure Ludwick. Jack told me what he and his lab were doing, on and on, in meticulous and exhaustive detail, until my head fairly swam, then abruptly asked me what I was doing: I came belatedly awake with the feeling that a steel trap had just clanked shut on me.

Jack's history as I know it starts in World War II when he was an Air Force weather officer, stationed on a Pacific island. Jack did not see combat. After the war, he got his degree at Scripps in the 50's from Francis Shepard, the "Father of Marine Geology." Those were truly the early days. There weren't any dedicated oceanographic vessels then, so Shepard, a wealthy New Englander, simply bought a yacht. Jack, like Francis Shepard, was from a well to do background (but in California) and like him was fiercely independent; they got along well. Jack's great formative experience with Shepard was being brought up seasick, on the deck of the ship, being given asextant, and told to find himself. In turn, every student that Jack Ludwick ever had went through this ritual.

Jack Ludwick became Director of the Institute of Oceanography at ODU in 1968. When I got to ODU (for the first of two times as a faculty member) in the summer of 1968, Jack wasn't there yet. Ron Johnson arrived several weeks after I did. Jacques Zaneveld was still the Director of the Institute of Oceanography. Until my arrival, he had been the entire faculty.

Jacques was a crusty old Dutchman who did not get along with the Dean of Science. The Dean, Melvin Pitman, was a Virginian with a broad country accent, a cheerfully domineering man who rather reminded me of Nikita Kruschev. My memory on this (I must be confusing the two men) says that he once took off his shoe and banged it on the table, something that Nikita Kruschev actually did. I met Jake Becher and George Ofelt then, the dean's bright young men, whom he had just installed in the Physics Department. Jake is still in the Physics Department, and George, until recently, was our optical oceanographer. At any rate, Zaneveld didn't get along with the dean, and in fairness to the dean, Zaneveld was probably a better scientist than administrator (he was an algologist, who sent students down to dive through the Antarctic ice to find macroalgae).

The dean wanted someone who could drive the expansion of the Institute with the New Slover Money. When he turned to Jack Ludwick he probably got both more and less than he bargained for. The contrast between the emotional, expansive, politicking and not very polished dean, and my reserved, conservative, urbane and stubborn new colleague was even more striking than the contrast between Pitman and Zaneveld. Jack hated being pressured and the dean loved to coerce people. But Jack was a scientist's scientist. The dean had hired him on the strength of his Scripp's credentials, and Jack didn't let him down on academic issues.

Jack wanted to instrument the Bay Bridge Tunnel in 1968. He called his Scripps classmate Harris B. Stewart ("Stew"), then head of Atlantic Oceanographic and Meteorological Laboratories in Miami. Stew's response was tepid, and I could sense Jack's frustration. Intellectually, Jack knew that he ought to pull strings and use his connections but he detested the process and was not good at it. Ironically, Stew, the ultimate political animal, wound up, vision-handicapped and semiretired, as the somewhat superfluous marine science director at ODU for several years.
The students tell a story about Jack and me dating from this time that is wrong in all its details, but truly captures the difference in our temperaments. Jack was determined to get basic science out of his "back garden," lower Chesapeake Bay.

We went out on the Holton, and emplaced current meters on the Sand Wave Fields, the students and I often dove to inspect the bottom. The story has Jack asking me to take notes as the equipment went over the side, and reports Jack's horror as I produced a book of paper matches, ripped off the cover, and proceeded to take notes on it with a pencil stub.

The details are wrong because the story takes place too late in our relationship to be true. During his first weeks as the new Director, Jack carried a notebook, producing it to take notes whenever he learned something else about his new kingdom. I was so impressed that I have been carrying a notebook ever since, and would have had one during the Holton episode, but there is a psychological truth to the story just the same.

Jack wrote relatively few papers. He polished them slowly and carefully, partly because it was his nature to do things slowly and carefully, and partly because he made such great demands on himself and others. He assumed that reviewers would also make great demands and would attack him harshly. In many respects, Jack was his own worst enemy. But his papers are still read. In the early sixties, Jack would have described himself as a sedimentologist, as I would have, because the leading edge of our discipline at that time dealt with sedimentary petrography and related topics. As the decade progressed, we both became involved in sediment dynamics, the emerging synthesis of sedimentology with boundary layer physics. Jack's mathematical skills were strong; while I poked determinedly ahead into this new region, he could freely fly. Jack also had a good intuitive sense of science and could see the directions in which to move. He was in many respects a mentor to me at that time.

Jack was very conservative. He liked to describe himself as an "economic royalist", a term that Franklin Roosevelt had used to scornfully lash out at business interests who had opposed him. Jack could say some startling things, what Sandy, my wife (who was fond of him), called his "clunky remarks". I can remember his explaining to me and an astonished departmental secretary why Apartheid was a fair and appropriate policy for South Africa to pursue. If there was a coherent thread to the "clunky remarks," it was a respect for authority, no matter whether its policy was appropriate or not. Two souls shared Jack, one authoritarian and one libertarian, and when the dean told Jack to do something particularly stupid, the conflict between these halves of my friend fairly led to steam coming out of his ears.

Jack had an esthetic side. He liked the opera, and he liked going to concerts. He once told me how he and his wife Nora drove through the nearly deserted streets of Pittsburgh during a heavy snowstorm to go to a Sunday performance of the Pittsburgh Symphony Orchestra. Only the true diehards were there, he said. Yet Jack's approach to art was distinctly Ludwickian. Jack and I used to eat lunch in the faculty dining room at Webb Center (it was the Student Center then; Louis Webb, another old-time Virginian, was still President) We often ate with Wayne Bowman from the English Department. One day, Jack explained to us that he was very interested in the novel, and wanted to get a list of the 100 best novels to read. Wayne and I scoffed; that wasn't the way to approach the novel and there probably wasn't any such list, we said. Jack spent the afternoon in the library, and the next day triumphantly appeared at lunch with somebody's list of the 100 most important novels. But the 19th century heyday of the novel failed to hold Jack's attention. It was the French post- modernist novels that engaged him, mainly because these people were experimental. Jack told me about one such novel that was unpaged and unbound; you could read the pages in any order. Jack generally didn't have much of an ear for poetry, although he was interested in the French Symbolist poets Verlaine and Malarme; these were the "slide rule" poets who hoped to synthesize poetry and mathematics. This was another side of Jack emerging; the radical frozen inside the conservative. Jack disapproved of tradition. He had little interest in history and scoffed at religion ("But how could you listen to the sermon, Don...").

We survivors honor the dead with our memories. At least once a week, I still have an argument with Jack Ludwick.

This piece was written by Dr. Swift, now Professor Emeritus, who at the time was Eminent Professor and Slover Chair of Oceanography. It began as a speech delivered at the Department's Ludwick Dinner in 1995. Then-Assistant Professor Fred Dobbs, editor of the newsletter, cajoled Dr. Swift into writing it down.

Menard, H.W. and Ludwick, J.C., 1951. Applications of hydraulics to the study of marine turbidity currents. Society of Economic Paleontologists and Mineralogists, Special Publication No. 2, pp. 2-13.