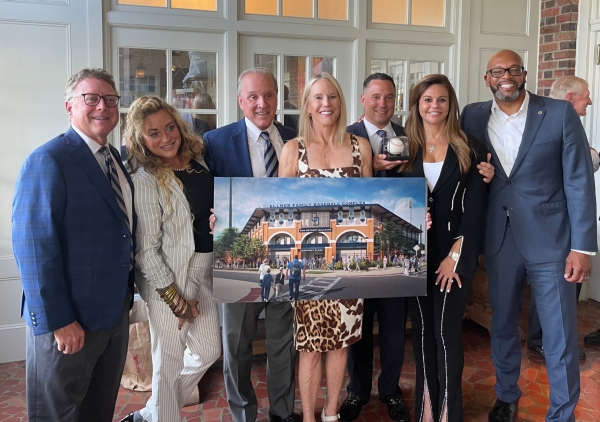 NORFOLK, Va. - One of the region's most generous philanthropic families has donated $2.5 million toward a planned $20 million renovation of Old Dominion University's antiquated baseball stadium.

ODU President Brian O. Hemphill, Ph.D., announced the gift from Dennis Ellmer and his wife, Jan, during his State of the University address Friday morning at Chartway Arena.

The stadium will be known as the Ellmer Family Baseball Complex.

Ellmer is founder, president and CEO of Priority Automotive, which has more than 20 dealerships in Virginia and surrounding states.

"Dennis has led Priority Automotive to become a thriving business in multiple states," President Hemphill said during his speech. "But perhaps what has defined Dennis most is his love for others and his desire to create change and opportunity as far and wide as possible."

The fundraising effort to renovate the stadium began the final week of the 2021 baseball season. The Monarchs had finished their best regular season in 90 years with a 44-12 record and won the Conference USA Tournament.

ODU was named one of 16 No. 1 seeds to the NCAA Tournament but was unable to host an NCAA regional because its stadium did not meet minimum standards. ODU played at the University of South Carolina, losing to Virginia in extra innings in the regional final.

Old Dominion's Bud Metheny Stadium has had only minimal upgrades since it was built in 1983. Motivated by the national attention paid to the stadium's deficiencies, a group of ODU benefactors quietly began raising money to renovate the facility.

Shortly after the 2021 season was complete, the University hired Populous, the nation's premier sports baseball stadium consulting firm, to study how best to rebuild the stadium. Populous recommended a $20 million makeover that would include expanded and upgraded seating, luxury suites, a club area, new locker and meeting rooms, other upgraded amenities for players and fans and a new press box for championship events.

The renovation would preserve most of the existing stadium infrastructure and can be done in stages.

In his speech Friday, President Hemphill said he began hearing complaints about the baseball stadium even before he came to Old Dominion in July of 2021. "In that moment, I learned about the passion of Monarchs," he said.

"The baseball supporters and alumni went to work."

And so did President Hemphill.

He closed some of the dozen-plus major donations, including Ellmer's. They met at a restaurant in Chesapeake near Ellmer's corporate headquarters, and President Hemphill pitched the proposed donation. After conferring with his wife, Ellmer told President Hemphill they would make the gift.

"Brian was so excited when we said yes," Ellmer said. "Clearly, he was very invested in getting this project done."

Ellmer said he and his wife made the gift because of the president's leadership.

"Brian has done so much impressive work in his short time at ODU," Ellmer said. "He's started so many great initiatives, from committing the University to become a leader in the maritime industry to what I hope will be a merger between ODU and Eastern Virginia Medical School, something that would be so good for Hampton Roads."

Head Baseball Coach Chris Finwood is ecstatic that his teams eventually will play in an upgraded facility. "This never happens without President Hemphill," Finwood said.

"He came here and said, 'This needs to be fixed.' He wants all our facilities to be first-class. And he realized very quickly that our baseball facility was not up to par."

Jena Virga, executive director of the Old Dominion Athletic Foundation, said Ellmer's donation has given a boost to the overall fundraising effort.

"We've had great discussions with other prospects," she said. "We hope to complete the campaign in the near future."

Ellmer is a self-made millionaire who grew up in a working-class neighborhood in the Ocean View section of Norfolk. He was already an entrepreneur as a senior at Norview High School, delivering the morning and evening newspapers and selling auto parts.

He attended ODU briefly before beginning what would be a successful career in the business world. With the blessing of his wife, he mortgaged his house, borrowed every dime he could and purchased Jimmy Kline Chevrolet and Toyota in 1998.

It was a huge risk, Ellmer said. But the dealership thrived and led to the founding of Priority Automotive, now a $2 billion a year business that employs nearly 3,000 people.

Ellmer has never forgotten his roots. The son of a Marine, he grew up with four siblings in a house without air conditioning. He and his siblings often slept on the front porch during the summer. If they wanted to go to a movie, they had to work to earn the money.

Ellmer has raised and donated millions of dollars to local charities, especially those that benefit children, as well as to ODU athletic and academic scholarship programs.

He took over the Charity Bowl football game nearly a decade ago and turned it into a fundraising juggernaut now focused around ODU's spring football game.

Ellmer has been a generous supporter of ODU football since the program was founded in 2009. This is his first major donation to another sport.

He gave $1.5 million three years ago to create the Priority Automotive Club at ODU's then newly renovated S.B. Ballard Stadium. Even before the first football game in 2019, the club generated more than $4 million in revenue for ODU.

"Over the years, ODU became a school that I adopted," he said. "I really got excited when they brought football back. That's really when it started it for me.

"As I learned more about the University, I began to realize just how important the research being done here is to Hampton Roads and the commonwealth and how important it is for ODU to continuing graduating young people in fields such as cybersecurity, the sciences and education."

Dr. Wood Selig, ODU's director of athletics, said, "Our baseball stadium project would not happen if not for the generous support of Dennis Ellmer and the entire Ellmer family. Dennis is so driven to succeed in everything he does. He wants any cause that he supports and endorses to have the same level of success.

"Dennis also played an integral role in our state-of-the-art football stadium. Recruits buy with their eyes, and these two best-in-their-class venues will serve to attract high-level football and baseball recruits to ODU for generations.

"Dennis is leaving an exceptional legacy here at ODU."

Finwood said the renovated stadium will position ODU to be competitive in the Sun Belt Conference, one of the nation's most competitive baseball leagues. ODU joined the Sun Belt just two months ago.

A timeline for completion has yet to be finalized. The project must receive state approval before design can begin.

Finwood noted that the success of the baseball team in 2021 was the spark that lit the fundraising effort.