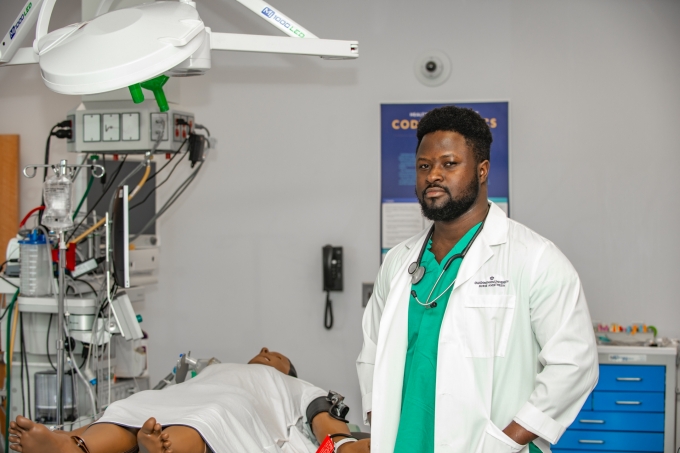 David Moffor, who is graduating from the Doctor of Nursing Practice program with specialization in nurse anesthesia, took a special interest in simulation during his training at ODU. Photo Chuck Thomas/ODU

When David Moffor was working as an intensive-care unit nurse in Fairfax, he witnessed a life-saving moment that became a life-changing event.

A patient's endotracheal tube was accidentally removed, causing an "unplanned extubation" that can damage vocal cords and lead to inadequate ventilation. Moffor watched as an African American woman took control at the head of the bed. She calmly and efficiently directed the doctors and nurses to assist.

"The room was so calm. She asked for what she wanted to secure the patient's airway. It was as if nothing happened, she did it with such finesse," he remembered. "I was wowed. It was rare to see an African American woman taking control of a patient situation."

She was a nurse anesthetist, or CRNA. Watching her, Moffor, who originally planned to attend medical school, saw the kind of career he wanted for himself.

"The autonomy she possessed, her knowledge, her technique. This is the next level of nursing where I would like to be," he said. "I thought, 'I would like to reach more patients and own my skills.'"

After three years of hard work, Moffor will graduate in May from the School of Nursing's Doctor of Nursing Practice program with specialization in nurse anesthesia. He's completed a rigorous curriculum that prepares graduates to keep patients safe under anesthesia, easing their fears as they enter a procedure and greeting them when they return to consciousness.

Successful applicants to ODU's program need to have ICU experience, a high undergraduate grade point average with an emphasis on science and strong GRE scores, according to Karen Gillikin, a lecturer who coordinates clinical rotations. In the program, students complete coursework in chemistry, physics, physiology, pharmacology and a six-semester clinical and research curriculum.

But Moffor doesn't shy away from a challenge.

His family left Cameroon, located in west-central Africa, when Moffor was a teenager to chase "the American dream." Nursing is the family profession; his mother and sister became nurses when they settled in northern Virginia.

"It was very challenging moving here because everything was different," he said. He spoke British English and felt like he couldn't keep up with conversation. "Now I feel like I'm the one speaking fast."

He earned a bachelor's degree in biology from George Mason University with plans to attend medical school. But after he sought opportunities to shadow professionals at Inova Fairfax Hospital, he fell in love with nursing and completed a Bachelor of Science in Nursing degree at George Mason in 2016.

"I found nurses are the ones who actually interacted with patients one on one," he said. "I think what I really loved about it was providing care beyond the physical. Understanding where patients are coming from, what they're dealing with. I think that emotional support is something that patients didn't always get from doctors, but they do get from nurses."

He worked as an ICU nurse for almost three years before he decided to pursue becoming a CRNA. He met Wallena Gould, founder of the Diversity in Nurse Anesthesia Mentorship Program, and learned how to prepare for his application to ODU's program. Moffor is passionate about diversifying the field; only 3% of CRNAs are African American, according to a 2020 survey by the American Association of Nurse Anesthesiology (AANA).

"That doesn't reflect the population they serve. To me, it would mean a lot to have that diversity. It helps with building trust with a patient within a few seconds," he said.

Moffor was drawn to ODU's program because it trains CRNAs to be independent practitioners and allows students to train in different settings, from hospitals to outpatient clinics. Hampton Roads' high rates of cancer, obesity, asthma, diabetes and heart disease offer an excellent training ground for CRNAs. Their clinical rotations then take them around the country to gain experience in specialties and trauma.

In his 2,500 hours of clinical experience, Moffor worked at sites across the region and in North Carolina, Ohio, Oklahoma and New Jersey. By his count, he has worked about 900 cases, including 200 nerve block injections, more than 40 epidurals and more than 40 spinal injections. At one site, he recognized and responded to unanticipated and previously undiagnosed arrhythmia; his clinical rotation supervisor told Gillikin, "He is a strong representative of the ODU anesthesia program and will be an incredible CRNA."

In his research, Moffor has focused on improving care for minority patients, studying readmissions to the hospital for diverse populations. "He wants to improve patient care at many levels, not just in the operating room," Gillikin said.

He also expressed an early interest in simulation and was offered the opportunity to attend a national meeting to learn more about simulation in nursing training.

"It's extremely unique because most students are just trying to get through the program," Apatov said. "Anybody who steps up and says, 'Not only am I interested in this work, I'm interested in this extra work that I don't have to do' ... that's unusual."

Moffor's professors believe he'll have his pick of job opportunities, and he hopes to be an independent practitioner.

"There's an appeal of building trust in a short period of time and then delivering on that promise that you give to keep patients safe. That requires a very high level of responsibility and autonomy," Moffor said. "That's something I've always wanted and something I think I'm able to deliver." 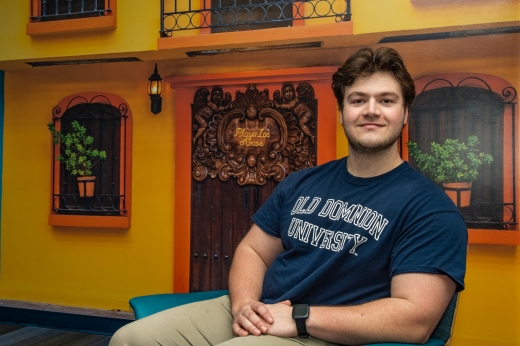 Class of 2022: International Business Major Uses Language to Connect with Family – and the World

Trevor Law, a Spanish and Arabic minor, plans to work and live abroad after graduating from ODU. (More) 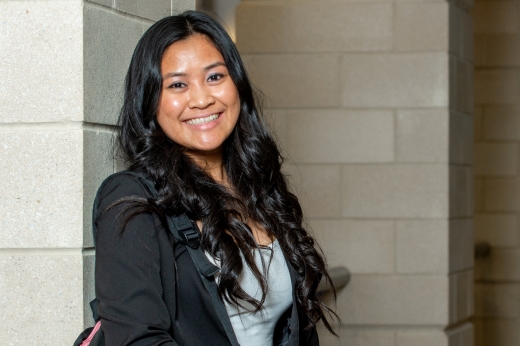 Circumstances led her to pursue a GED, which motivated her to excel in college. She’ll graduate with the Top Marketing Student Award, which was voted on by department faculty. (More) 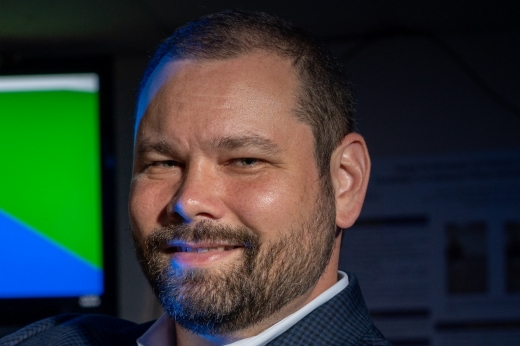 In the new role, Rhea will be responsible for increasing sponsored research. (More)