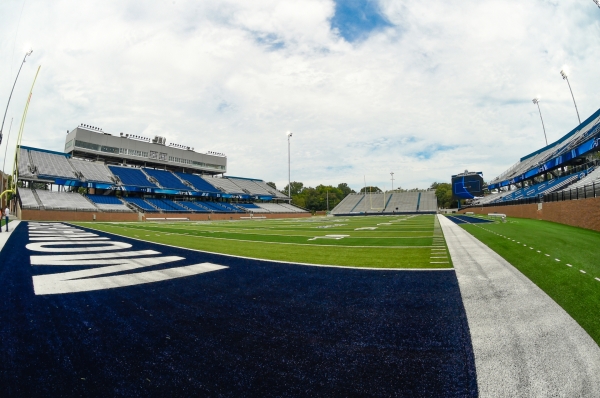 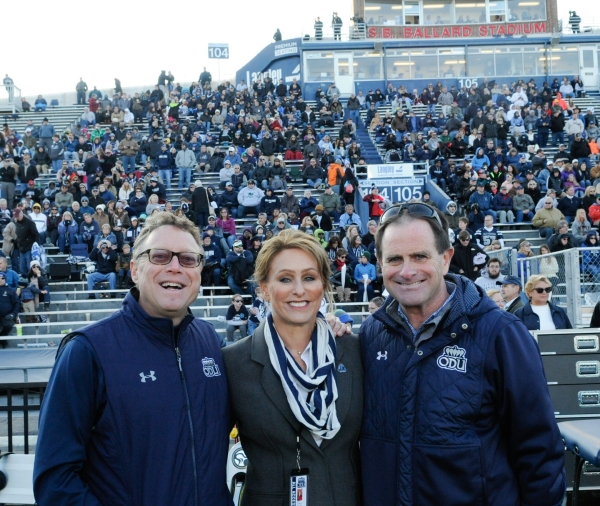 In his 11 years as President, he has increased overall private and public funding to ODU by $890 million, encouraged research in high-impact areas such as flooding resilience and cybersecurity and elevated the importance of social mobility.

Although his contributions to ODU football aren't as well known, Athletic Director Wood Selig is among those who say they should also be a large part of that legacy.

Suffice it to say that without President Broderick, Kornblau Field at S.B. Ballard Stadium would not be unveiled Saturday when the Monarchs open their season against Norfolk State.

In fact, football would likely not exist were it not for Broderick's vision and leadership.

"President Broderick has literally poured his heart and soul into our athletic programs and certainly into the S.B. Ballard Stadium project," Selig said.

"He's been involved in every step, from pre-planning to the design and feel of the stadium, the press box, suites, club level and capturing the history of Foreman Field.

"He made bold, decisive decisions that allowed our program to grow."

Broderick wasn't president when ODU's Board of Visitors decided to re-start football in 2005, but he worked with board member Sonny Stallings, as well as then President Roseann Runte, Vice President Bob Fenning and Athletic Director Jim Jarrett, to lay the groundwork for football.

After he became president, Broderick made the call when ODU joined Conference USA and the Football Bowl Subdivision in 2013. It was a bold decision that he acknowldged at the time entailed some risk.

But ODU's stunning, 49-35, home victory over highly ranked Virginia Tech last September on national TV would not have occurred had ODU not made the move up. It was perhaps the biggest victory by any ODU team ever and exposed the University's name to tens of millions of people around the world.

By 2012, President Broderick knew ODU needed to replace Foreman Field, a historic stadium that had far outlived its useful life. Yet he was patient.

"Football was a well-thought-out plan built on financial reality," he said. "We moved to FBS knowing that we wouldn't be able to construct a new stadium, at least on my watch, until we had the resources to do it."

He waited for several years, then asked the General Assembly for permission to build the stadium, promising not to raise student fees.

"Now we have a stadium that shines very brightly on 49th Street," Broderick said.

Broderick said he will be eager to see the expressions on fans' faces when they enter the stadium on Saturday. "I expect most will be surprised at just how much larger and nicer this facility is compared to Foreman Field."

After a $67.5 million reconstruction, the stadium will seat 22,480, a bit more than the 20,118 at old Foreman Field. Yet that statistic doesn't convey the degree of improvement throughout the stadium.

The stadium is much larger and grander than Foreman Field and has to be seen to be truly appreciated.

"It's like moving from a large high school stadium into a big-time college football stadium," ODU linebacker Lawrence Garner said. "You can't compare what we had with what we have now."

The west side, topped with a mammoth press box, is 94 feet tall, nearly twice as high as the original Foreman Field.

Foreman Field was wrapped around a track, so the stands were set back from the field. Architects designed the new stadium to put fans right on top of the field, with the ends of both sidelines angled in facing the 50-yard line.

"I've sat in seats all over the stadium, and there's not a bad view, even at the far ends of the upper decks," said Greg DuBois, ODU's vice president of administration and finance, who oversaw stadium construction.

"You're much closer to the field," he said.

And much more comfortable.

Each of the nearly 15,932 new seats on the east and west sides offers at least 9 inches more leg room, so fans won't have to stand when people walk past them nor sit with someone's knees in their backs. Nearly 6,200 are chair-back seats. All offer back support.

Other amenities may be a shock to the system of ODU fans accustomed to portable toilets, long concessions lines and a scoreboard in which video replays were often fuzzy.

The new stadium will have 232 new toilets, with nearly two-thirds designated for women.

Seven new concession stands will offer everything from Mexican food and crab cakes to vegan fare.

The stadium will be a delight to the eyes as well as the ears. The lighting is much brighter. Gone is the outdated public address system that rendered announcer's Jack Ankerson's voice incomprehensible to some fans.

The new sound system has 93 speakers, which will carry the sound of Ted Alexander, the radio voice of ODU football, everywhere, including restrooms and concession areas.

ODU replaced the 11-year-old scoreboard with the TowneBank Video Board, which is much larger and offers a much better picture quality. The video board might be the best upgrade of all.

Video highlights of other college football games will be mixed with live shots and highlights of ODU games. The NFL's Kansas City Chiefs recently installed a similar video board in their stadium.

"We want people to feel like they are in their living room at S.B. Ballard Stadium," Selig said. "We want them to be able to keep track of other games. That's really what fans are now demanding."

Rather than have masons lay block and brick by hand, the new stadium was built with 700 pieces of pre-cast concrete. That allowed the stadium to be finished on time, which in itself was a minor miracle given the short, 9-month construction schedule.

It also allowed ODU to install a brick façade at the bottom of the stands.

"When our games are on national TV, it's going to portray us like we want to be portrayed," Selig said. "It's class, it's rich, it's elegant. It's not just another stadium."

A brick façade at the east entrance pays homage to the architectural style of Foreman Field, with graceful arches.

"Foreman Field served our community well for 82 years," Selig said. "I'm so glad we were able to retain a bit of its history."

The stadium is also more than a football facility.

DuBois said the Priority Automotive Club, which holds 400 people, will be used for meetings and receptions. Businesses and groups on campus have already inquired about it, as well as the University Suite.

Perched atop the souothern part of the stadium's west side, the University Suite offers a striking view of the Norfolk harbor, ODU's campus and downtown Norfolk. On a clear day, the Virginia Beach Town Center can be seen in the distance.

Tim Kovacs, ODU's director of football operations, said he hopes to bring recruits to that suite. "We've never had anything like this to show to recruits before," he said. "You can see our entire campus."

Selig envisions using the TowneBank Video Board for movie nights for students.

"We've been so focused on getting the stadium ready that we haven't really begun to discuss other uses," DuBois said. "But there will be many days when you have activity going on there unrelated to football."

Football Coach Bobby Wilder said the stadium has already helped recruiting. Foreman Field was a negative factor when recruits visited campus. The new stadium is a huge plus.

It's also been a plus to the current team.

"We have 64 players on our roster who played in the old facility and have memories of Foreman Field and what it felt like," Wilder said.

"There's a real buzz around our team now. Our players are so excited. They all want to run out of that tunnel, to be the first to represent Old Dominion in the first game played at the new S.B. Ballard Stadium."

"I've been a lot of stadiums in all of my years of coaching," Wilder said. "This is the best venue in the country for its size. I don't think anyone else has a stadium that compares."

Broderick said Board members and others who pushed to bring football back to ODU have been vindicated by the results.

"What ODU football has done to connect us to the community has exceeded all of our expectations," he said. "We had a belief that synergy would happen but no one really knew for sure.

"It's been amazing how many people will stop and talk to any one of us about an experience on campus and what triggered them to come here was a football game. It's been a good rallying point for the community."

"Get there early and check out the stadium, have fun and cheer loudly for your Monarchs," he said. 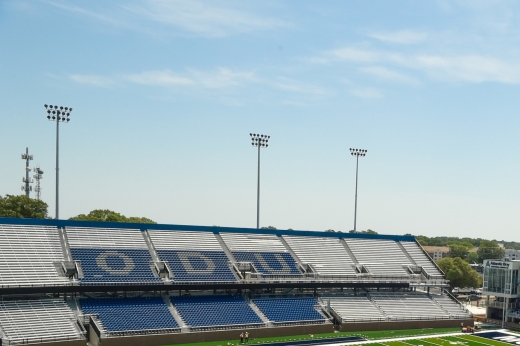 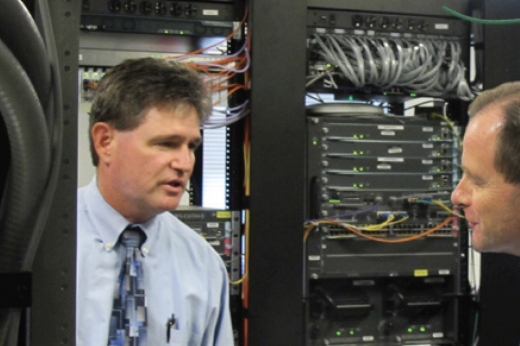 Part 3 of Counting Down to Kornblau Field at S.B. Ballard Stadium's Opening Night