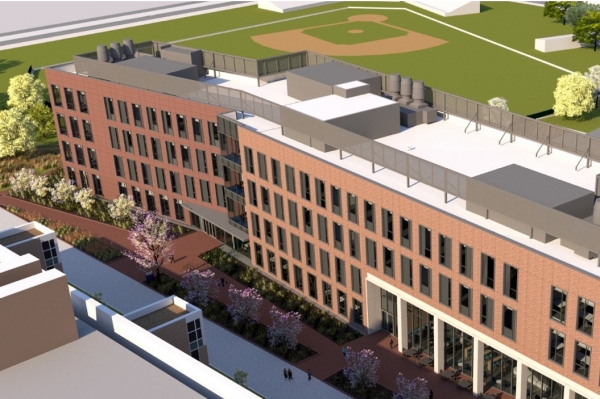 This is a rendering of ODU's new chemistry building, which is scheduled to open in the fall of 2020.

John Cooper can't wait to move into Old Dominion University's $75.6 million chemistry building when it opens in 18 months because of the great strides it will allow his department to make.

Construction of the 110,000-square-foot, four-story building began earlier this month. When construction is complete in the fall of 2020, Cooper hopes it will allow ODU's Chemistry Department to become even more competitive with the best schools in the nation.

Especially, he said, when it comes to recruiting faculty.

Nor will many schools be able to offer 1,800-square-foot labs for new faculty members, a recruiting feature ODU is incorporating into its new building. The national average is about 1,000 square feet.

Most younger and highly-sought-after faculty members want to do research, and ODU's building is designed to allow them to do world-class research.

"It gives us an upper hand when you are recruiting," he said.

Clearly, it will allow ODU's chemistry department to grow, something that hasn't been possible in recent years because of size constraints of the Alfriend Chemistry Building, which was built in 1966.

As ODU has done amazing work in the existing facilities, demand for chemistry courses grew and classes, lectures and tutoring were moved across campus.

"We're running 5,000 students per year through our courses," Cooper said. "We have classes going from 8 in the morning until 10 at night. And every lab in this building is booked solid."

"This new building both allows us to grow and puts everything we do under one roof."

Gail Dodge, dean of the College of Sciences and professor of physics, agrees the building will make ODU quickly rise in the eyes of potential students and faculty members.

"It's going to be an amazing facility, from the sophistication of the equipment, the laboratories, the tutoring, the help for the students. It's going to be a chemistry education experience that will be rivaled by very few places in the state," she said.

The new building is being funded by a state bond issue in part intended to increase the number of students in STEM-H, those majoring in science, technology, engineering, math and health. Old Dominion graduates the second-largest percentage of STEM-H students in Virginia.

More than 40 percent of ODU students are STEM-H majors, and most take at least an introductory chemistry course.

The new building will allow ODU not only to enroll more chemistry majors, but also accommodate more STEM-H majors. With Amazon building a new headquarters in Northern Virginia that will employ at least 25,000, state officials have challenged ODU and other schools to increase the number of high-tech graduates.

ODU was already on that path. The school is building a $65 million, 470-bed residence hall, the Hugo A. Owens House, which is also scheduled to open in 2020 and will largely house STEM-H students.

President John R. Broderick said state officials got behind a long-sought plan to build a new chemistry building when a group of legislators toured ODU's campus a few years ago.

"We talked to them about how many STEM students we're graduating, and then showed them some of our labs. In order for us grow our program and compete in that space, it was very clear that it was time for a new building," Broderick said.

"Everyone who saw that building that day, all of sudden is wasn't a proposal, they saw the reality of it. They knew we had to have a new building."

The chemistry building includes a new planetarium complete with a 123-seat digital theater that will replace the existing one.

The building will fit on a relatively narrow site on Elkhorn Avenue between the ODU baseball stadium outfield and the Oceanography/Physics (OCNPS) Building.

ODU's master plan adopted a few years ago called for student housing there, but the proximity to science and math buildings made it a perfect site for the chemistry building.

The building is designed for students to go to class, attend tutoring and active learning sessions, meet with faculty and go to labs without having to walk more than few steps.

First-year students will attend class, go to labs, consult with faculty members and receive tutoring all on the first floor, and all within view of each other. There will be much the same setup on the second floor, which will primarily hold classes and labs for sophomores.

Juniors and seniors will participate in research with graduate students and faculty on the upper floors.

Much of the first two floors, including labs, will be visible from the outside through a large swath of glass. Cooper says officials have dubbed that part of the building "STEM on display."

Cooper said it will appeal to high school students touring campus who may not have time to tour buildings.

"When they walk by, they will see students in laboratories doing real research," he said. "The best high school students want to do research right away. And they will see that's what we offer."

ODU already offers nearly all STEM-H majors the opportunity to do research, and all chemistry students can do so beginning their first year on campus.

A few years ago, ODU purchased a high-field Nuclear Magnetic Resonance (NMR) device, which Cooper says allows you to look at molecules and identify their structure.

Most colleges won't allow underclassmen to use high-field NMR. "That's because they'll break it, and these are expensive devices," Cooper said.

ODU purchased a robotic NMR that allows students to program whatever research they're doing. Then the machine does the work.

"Once they've synthesized their molecules, they can bring it over and insert it into the robot and get the data," he said.

"A high-field NMR is something that nobody else in the state has. And every single student gets use it in their sophomore year of chemistry."

ODU's Chemistry Department already does groundbreaking research, from trying to find a cure for bacteria that have become immune to antibiotics to working on generating renewable energy from hydrogen, sunlight and water.

"We have people with grant funding who have a hard time doing their work because they don't have enough space," Dodge said. "Very soon, we're going to have that space and our research is going to really grow.

"We are also trying to recruit the best students. We are a doctoral university that's in a metropolitan region. That puts us in a very unique position. Undergraduates get experience at a research university they can't get just anywhere.

"This building will allow us to grow our research and make us even more competitive." 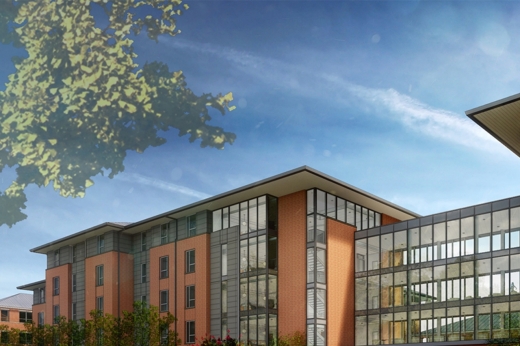 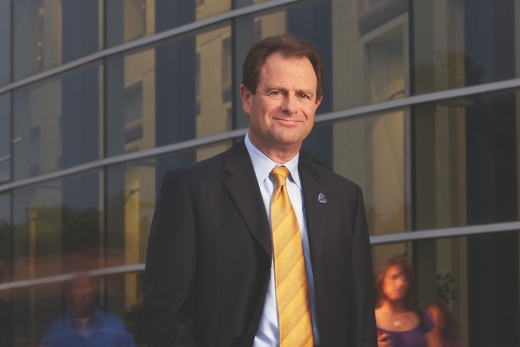 Beginning this fall, between 10 and 20 students will receive up to $5,000 a semester from the Huntington Ingalls Industries and Newport News Shipbuilding Scholars program. (More) 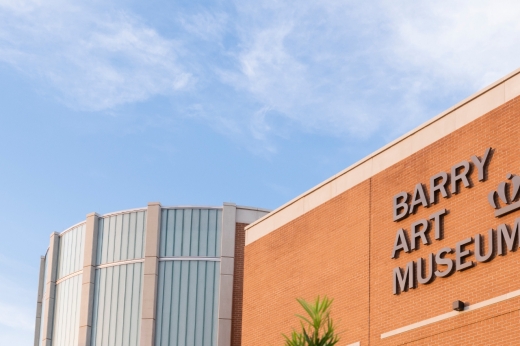 The 24,000-square-foot, two-story facility, which opened in November, is the result of a $37 million gift – the largest in University history – of art and funds from Richard and Carolyn Barry. (More)