At the Behest of President Broderick, the ODU Board of Visitors Changes Name of Cafe 1201 to "Ruby's Cafe" 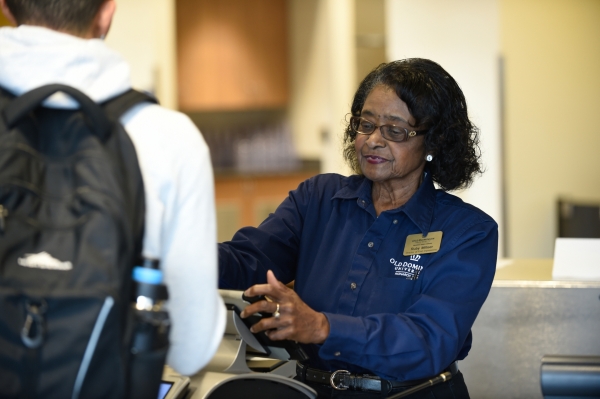 It was perhaps the quickest resolution ever passed by the Old Dominion University Board of Visitors.

President John R. Broderick was wrapping up a report to the board Thursday afternoon when he concluded by suggesting members should consider renaming Café 1201 in Webb University Center in honor of Ruby Milteer.

Before he finished his last sentence, a board member made a motion to approve the idea. Three others quickly seconded it. When Rector Lisa B. Smith asked if there was any discussion, board member Jay Harris, an ODU graduate who is an ESPN commentator, replied: "Nope."

The vote was unanimous.

You would expect nothing less for "Miss Ruby," as she is known to ODU students. She is perhaps the most beloved employee on campus.

Miss Ruby was hired in the summer of 1968 as a cashier for Webb Center's dining facility. She never left ODU. She worked her way up and is now a supervisor at the Broderick Dining Commons, the University's biggest and newest dining hall.

She rises at 4:45 each morning and is at ODU by 6. She sits near the front entrance and swipes meal cards for students, but, more important, she makes them feel at home.

She is engaging. Her smile is infectious. She calls everyone "baby" and makes a point to learn students' names and ask how they're doing in a way that assures them she really wants to know how they're doing. She hugs some on their way out.

Many students share their problems with her. Some are homesick, and she tries to make them feel better. But if she hears they've been skipping class, her demeanor changes.

"I let them know they've got to go to class," she said.

During a short interview Friday morning, more than a dozen students came and went. She greeted or said goodbye to all of them by their names.

"She's always here and knows practically every student who walks in," said Holden Strong, a junior from Warrenton in Northern Virginia who is majoring in modeling and simulation

"She's always intentional when Thanksgiving break or winter break is coming up. She always tells us, 'Make sure I get to say hi before you leave.' Even days when I'm not feeling well, she'll notice and talks to me about what's going on."

Miss Ruby, he said, makes him feel like he has family at ODU.

"I don't think there is a student who's gone through Old Dominion who hasn't had a chance to engage with her," President Broderick said. "She's touched so many lives. She's a remarkable person."

Over her half century at ODU, Miss Ruby has gotten to know every president since the school became independent from the College of William & Mary. She has seen the campus more than double in size, the student population grow much more diverse and ODU begin a football program, something she long had thought was missing.

Miss Ruby was honored on her 50th anniversary at ODU in August 2018. President Broderick and Harris paid homage to her, as did the Monarch Marching Band and her supervisors at Monarch Dining.

She received a rocking chair and other memorabilia.

But she says this honor is more important to her because a dining facility will carry her name long after she retires.

"I don't know what to say," she said. "I'm overjoyed. I'm overwhelmed," she added as tears welled in her eyes.

"Webb Center is where I started, and I worked there until they moved me here. I love that building as much as I love this one."

Café 1201 is being renovated at the Webb Center and is expected to reopen in January, along with an expanded Chick-fil-A and new Steak 'n Shake and Qdoba restaurants.

Miss Ruby said she had thought President Broderick held her in high esteem. "Now I know he thinks a lot of me," she said.

"I've always admired President Broderick and his wife, Kate. They've been so good to me.

"It's truly an honor, and I truly appreciate it. They could have chosen a lot of people on campus. The fact that they chose me just means so much to me. It's something I will never forget."

The only football coach ODU has had steps down. (More) 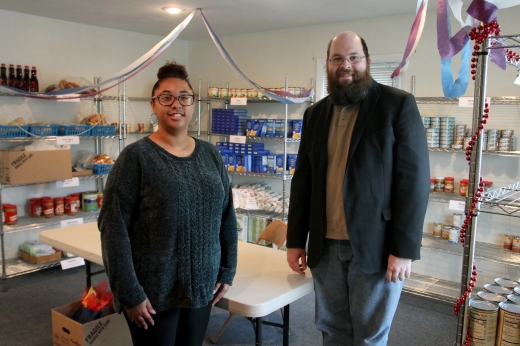 The offerings of the nonprofit facility, which opened in 2015, recently got a big boost from donations by the new Panera Bread on Monarch Way. (More) 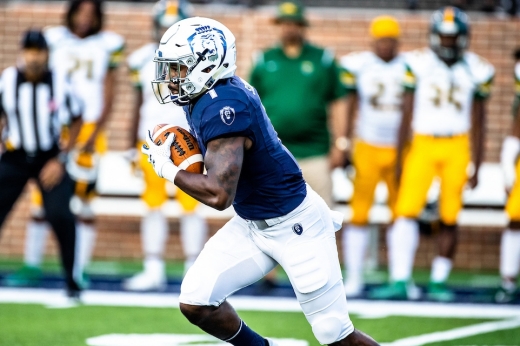 Kesean Strong’s father was killed in a car accident, but the embrace of teammates and coaches – and counseling – helped him overcome his grief. (More)