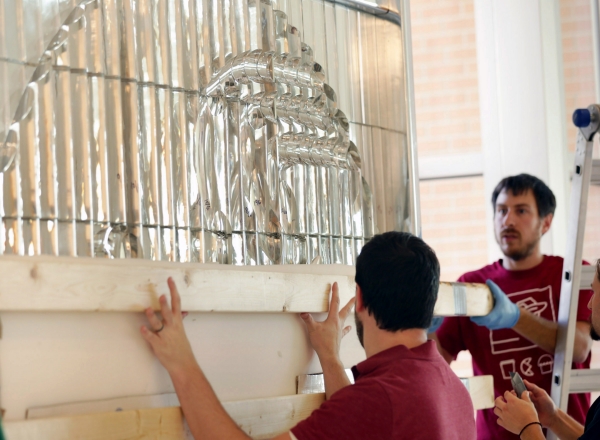 The Barry Art Museum will open to the public Nov. 14.

On Aug. 16, Day Two of installing Stanislav Libenský's monumental glass screen "Dove" in the Barry Art Museum at Old Dominion University, the four art handlers faced one more challenge. Six rows of cast and cut glass semi-cylinders, 30 per row, had been secured within a metal framework. Now it was time to set the final row.

The remaining pieces, laid out on a blanket on the floor, had to be positioned along the top just so. The addition of these clear glass semi-cylinders would provide the tension essential to keeping all 210 of the components in place.

A few anxious hours later, the task was done. Then the installers carefully dismantled the temporary support they had built around the screen to protect the 900 pounds of glass during assembly.

"Dove," which measures about 7 feet square, is a glass sculpture intertwined with the Communist history of what is now known as the Czech Republic. "I think it will be one of the stars of our collection," said Jutta-Annette Page, executive director of the Barry, set to open on Nov. 14.

The 24,000-square-foot museum, at 43rd Street and Hampton Boulevard, will open with more than 250 works, including glass sculptures, paintings, antique dolls and automata.

Nearly all of the objects will be from the collection of Carolyn Barry and her husband, Richard, a former rector of Old Dominion's Board of Visitors.

The Barrys gave their holdings in contemporary glass art, paintings and more to the University. Their donation also includes the cost of the building, an operating budget and funds for art acquisitions. The gift, announced in 2016 and now valued at more than $35 million, is the largest in the University's history.

"Dove" was purchased for the museum in 2017 using the art acquisitions fund. For the Barry, it adds to an already strong collection of four significant works by Libenský and his wife, Jaroslava Brychtová. "This large architectural screen has found a perfect, permanent home in ODU's new museum," Page said. "Its underlying message of artistic perseverance and commitment should be an inspiration for generations to come."

Libenský, who died in 2002, was a Czech artist known for pioneering and developing the use of mold-melted glass to make large sculptures. He almost exclusively collaborated with Brychtová, now 94. Trained as a sculptor, she made models from his designs, which she influenced with her input, and oversaw the casting.

When American Studio Glass Movement pioneer Harvey Littleton and some of his students, including Dale Chihuly, saw the couple's massive abstract sculptures at Expo 67 in Montreal, they recognized the medium's potential as a monumental art form.

By then, the couple had developed their signature direction. The duo used colored glass to create thought-provoking forms that superbly interact with light.

Brychtová was in charge of the three-dimensional realization of nearly every piece by her and her husband, but she was not directly involved in casting "Dove."

In the late 1970s, the Communist Party of Czechoslovakia commissioned Moser Glassworks, a renowned Czech company, to produce a sculpture for the party's Western Bohemian headquarters building, then under construction in Karlovy Vary, said Katya Heller, director of Heller Gallery in New York, which sold the glass screen to The Barry. Moser, in turn, invited Libenský to design it for a 1980 installation.

Heller, who was born and raised in Czechoslovakia during Communist rule, knew "the Libenskýs," as she calls them, for more than 30 years and often worked as their English interpreter.

She said there is little documentation about "Dove," so she drew on her first-hand knowledge of the couple and the times, plus conversations with Moser employees, to fill out the story.

At the time, Libenský taught glassmaking at the Academy of Applied Arts in Prague. Though he was in principle opposed to the Communist regime, he accepted the commission. Heller said the professor likely saw it as a chance to obtain much-needed internships at Moser for his students.

They settled on the image of a dove, flying from right to left. He had used it previously, and it was deemed acceptable by the government. "And yet it had the integrity they wanted," Heller said. "Meaning, it was not a symbol created for the Communist or Socialist system." The universal symbol of the dove of peace connected them to artists worldwide.

The couple was particularly inspired by Pablo Picasso's dove renderings. They liked the famed Spanish artist's simplification of the image, and the fact that Picasso was making political statements with his art.

Once the "Dove" design was ready, Brychtová made a clay model and subsequent mold for each of the 210 pieces, which were individually cast. "It became one of their signature techniques in constructing larger pieces," Heller said.

This piece is unusual within the couple's body of work for the clarity and purity of the clear glass. More typically, the couple worked with translucent colored glass that imparted a more "cloudy, grainy look," Page said. She added that they used a melting process with chunks of glass rather than finely ground glass.

After Communism fell in Czechoslovakia, following the Velvet Revolution of 1989, the work was given back to Moser, which kept it until financial pressures forced the company to offer it for sale. Heller Gallery purchased it in 2009. The gallery recognized the historical importance of the screen and awaited an appropriate new home where the piece would be kept on public view.

The Barry Art Museum is now that home.

"I would say that in the breadth of the story that it covers, it is an incredibly significant piece," Heller said. "It serves as an extraordinary example of what the Libenskýs' artistic aspirations were, what Stanislav instilled in his students, and also how they survived these years of oppression. They sustained a belief in artistic excellence, in aspiring to something greater" throughout four decades behind the Iron Curtain. 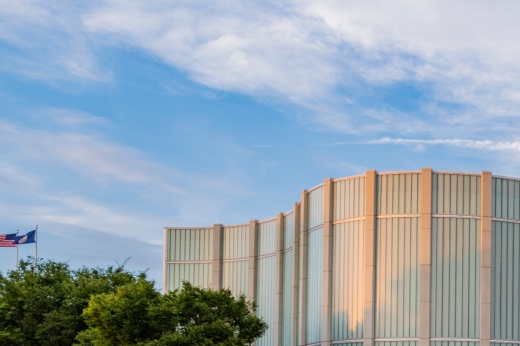 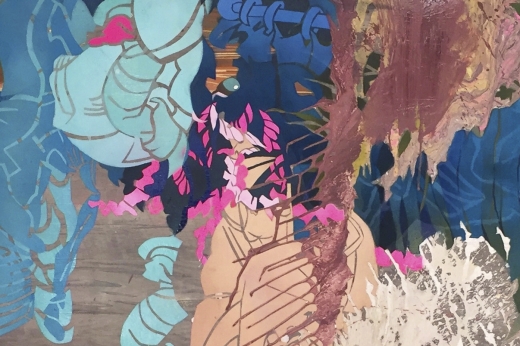