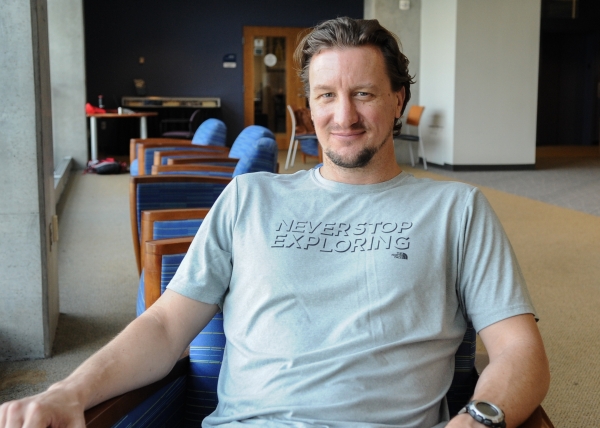 As a kid growing up in Indiana, Daniel Shanks had a common, if often unfulfilled, dream: to play professional basketball.

Unlike most, he got his wish, though it was in the Euroleague.

Shanks spent seven years in France, Holland, Austria and Estonia, developing an affinity for foreign affairs and an ear for languages.

"My teammates used to call me a closet linguist," Shanks said.

Shanks enrolled in Old Dominion University in the doctoral program in international studies.

Recently Shanks earned his second Critical Languages Scholarship from the U.S. State Department. Five hundred recipients were selected from a pool of more than 5,000 applicants to study languages, such as Chinese, Russian and Persian, that are important to foreign affairs.

This summer Shanks will spend two months, along with 25 other students, in Tajikistan, in central Asia, immersed in the language and culture of the area.

When he was in Europe a different type of instructor helped him develop his language skills: television.

"I learned Dutch watching 'The A Team' and 'Married with Children' reruns, and I learned Estonian watching 'Melrose Place,'" Shanks said.

It was also through TV that Shanks realized how he could put those language skills to use.

"I was in my apartment in Holland watching the war in Iraq and Afghanistan on TV and saw a bunch of guys who looked like me who weren't going to win a war by shooting people," he recalled. "They had to know about the language and history and politics and culture of the countries where they were fighting. I thought maybe I could be someone who could help them navigate the human and political terrain."

After deciding he'd spent enough time making a living as "an adult running around in short pants," Shanks returned

the United States and received a fellowship to study Tajiki - a Persian dialect -- at Indiana University.

To keep up with his peers, Shanks learned the Cyrillic and Arabic alphabets in a matter of days.

"That was tough, but I was really interested in it," Shanks said. "The minute I walked into that class I just knew that was it. I'd found what I wanted to do."

Shanks then took a job in northern Afghanistan as a civilian adviser working for the military.

"People always assume it was top secret, but it was really just nerdy stuff," Shanks said. "I studied language and politics and served as a consultant."

"The proximity to NATO and D.C. was great," Shanks said. "I had a choice between a few schools, but ODU seemed most closely aligned with what I wanted to do."

Eventually he wants to use his language skills to inform people about politics in the Middle East.