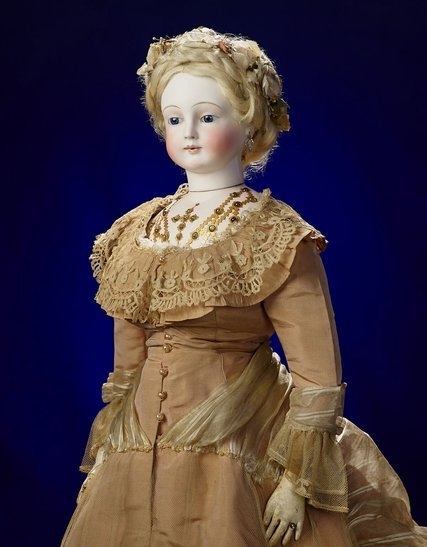 The doll, which will join the Barry Art Museum collection, was created by Antoine Edmund Rochard and is highly valued for its rarity. Image courtesy of Theriault’s Doll Auctions 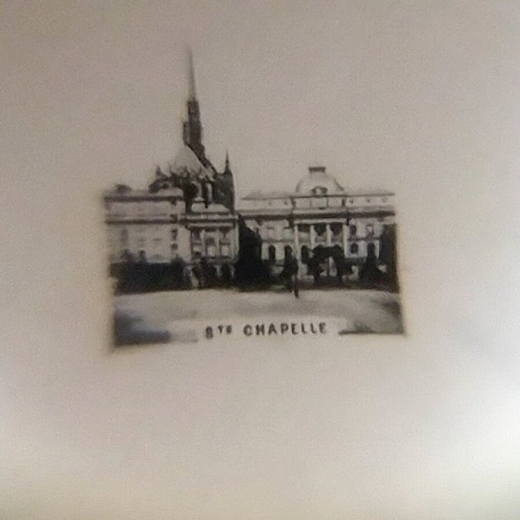 A micro-photographic image of Ste. Chappelle that is included in the doll's Stanhope necklace. Image Credit: Michael Sheibley/Courtesy of Theriault’s Doll Auctions

When Old Dominion University's Barry Art Museum opens this fall, its extensive inventory of studio glass sculptures, paintings and automatons will also feature an antique doll collection that now includes a rare, and mysterious, 19th-century French Rochard doll, which stirred excitement across the art world after its recent auction.

In January, Carolyn and Richard Barry purchased the doll from Theriault's Auction House in Maryland for $335,000 - a record for an antique doll. It was created by Antoine Edmund Rochard, a famed doll designer whose work is highly valued for unusual characteristics, that can be found on the Barry doll, such as finely modeled faces, parted lips, lifelike glass eyes as well as new inventions at the time like a built-in kaleidoscope and jeweled necklace that includes microphotographs.

The doll will become part of a collection that includes more than 80 other dolls given to the museum by the Barrys. In total, they donated funds and an art collection valued at $35 million - the largest gift in the University's history - to create the museum. The 24,000-square-foot building will hold more than 100 studio glass sculptures and works by American modernist painters from the Barry's collection as well as some important paintings from the University's art collection. It is scheduled to open in the fall of 2018.

Rochard filed a patent in 1867 from which the doll was designed. One of its prominent features is a Stanhope necklace that retains 24 of its 28 original micro-photographs, including images of the Pavilion d'Orléans at Fontainbleau, Sainte-Chappelle and other landmarks in and near Paris.

Jutta-Annette Page, executive director of the Barry Museum, is excited about the acquisition for its artistic significance, but also for the historic potential that is yet to be discovered below the surface.

She cited as an example one of the necklace's micro-photos, titled "Le Vengeur," which refers to a briefly published republican patriot journal of the time that strongly supported an all-out war against Prussia. Another photo depicts Paris' city hall shortly before it was torched by insurgents in conflicts associated with the Franco-Prussian War of 1870-71.

Because the doll was long-held in a private collection, it has never been the subject of academic research and discovery, Page said. That will change when it arrives at Old Dominion, she added.

"The inclusion of the Stanhope photographic image within the necklace of 'Le Vengeur' is particularly unusual and poignant," she said. "The image (of the banned newspaper) seems to refer to suppression of the press. Micro-photographs played a significant role during the time of the Prussian siege when communication between Paris and other unoccupied parts of the country relied on pigeons carrying micro-photographic messages across enemy lines. The maker of this doll, or its commissioning patron, clearly demonstrated his (or her) side of the political spectrum."

Page said the doll is one of fewer than a dozen examples of Rochard-patented dolls in existence today and one of the most complex and well-preserved.

"The Rochard doll is an exquisite example of a French fashion doll, a so-called Parisienne, a type represented by several dolls in the Barry collection," she said. "It will be a highlight of a gallery dedicated to dolls and historic automata (moving dolls) in the Barry Museum of Art."