Cancer Researcher Rewarded for His Work 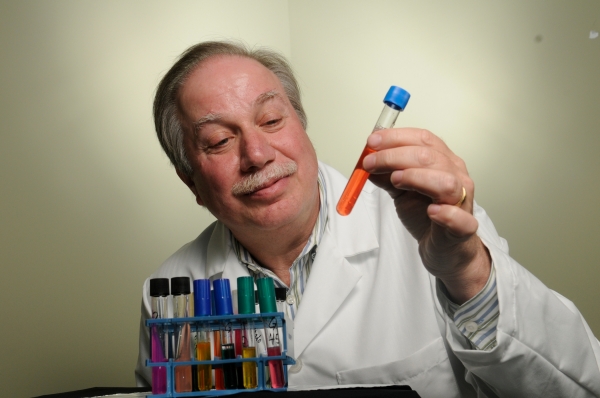 ODU Eminent Scholar, Richard Heller has received millions of dollars in grants from the National Institutes of Health for research in gene therapy for cancer and other diseases.

For Old Dominion University researcher Richard Heller, breakthroughs can happen in a billionth or trillionth of a second. And if you give him your ear, he can describe to laymen some of the intricacies of his life's work in a mild-mannered, disarming tone.

Heller, a professor and eminent scholar at the Frank Reidy Center of Bioelectrics, has been doing biomedical research at ODU for about a decade. One area of his research has been utilizing an electric field to destroy tumors.

The Center of Bioelectrics lured Heller to ODU in the summer of 2008. He has not only been moving the needle on research related to gene therapy for cancer and other diseases, but has attracted multimillion-dollar funding along the way.

He currently has three of National Institutes of Health R01 grants - "Efficient Delivery of Plasmid DNA to Achieve Appropriate Transgene Expression," "Thermal Assisted Gene Electro Transfer to the Skin" and "Controlled Delivery of Plasmid DNA via Low-Temperature Ion Deposition" - receiving about $1.8 million, $1.4 million and $1.7 million, respectively. He also was the 2018 recipient of the ODU Research, Scholarship and Creative Achievement Award.

"The center is a multidisciplinary center, a university-level center where engineers, biologists, and physicists work together," he said.

So how does some of his research work? Heller provided some insight.

"All cells are surrounded by a membrane," he said. "If you apply an electric field to the membrane, the membrane can become permeable. This can allow you to do things like introduce a drug or a gene into a cell. For example, you can deliver an agent into a tumor cell and destroy it."

Heller and his colleagues at the center work together as well as with other scientists nationally and internationally. He raves about ODU's international recognition in bioelectrics.

"We collaborated with many people, such as researchers in California, Florida, France, Germany, Japan, Denmark, Slovenia," he said.

Over the years, Heller's research has moved from delivering chemotherapeutics into cells to introducing DNA, which when done effectively can result in systemic changes by destroying bad cells while preventing other bad cells from reforming elsewhere in the body. Recently, Heller and his collaborators discovered that by applying external heat they could lower the voltage of the electrical pulse and DNA delivery into the cell, making it more efficient, he saids.

Heller said he became interested in bioelectrics at the University of South Florida, where he received his master's and Ph.D. in medical sciences. While he was in grad school, his mentor worked on a project to fuse human cells to animal tissue, something that no one had done. His successful work on the project planted the seed to his future, he said.

When you work in the field of gene therapy and cancer and cardiovascular research, it isn't easy to come up for air, Heller said. His knee-jerk reaction to the question "What do you do when you're not doing research?" is "That's a good question." After some thought, "watching movies and baseball, travel" came to mind.

"Even when you're not at work, the thoughts are still there, because there's always a problem to solve," said Heller, who is married and resides in Norfolk. "You may ask a question and find a solution, but it's going to generate three or four more questions. If you solve all the questions, then what is there?"