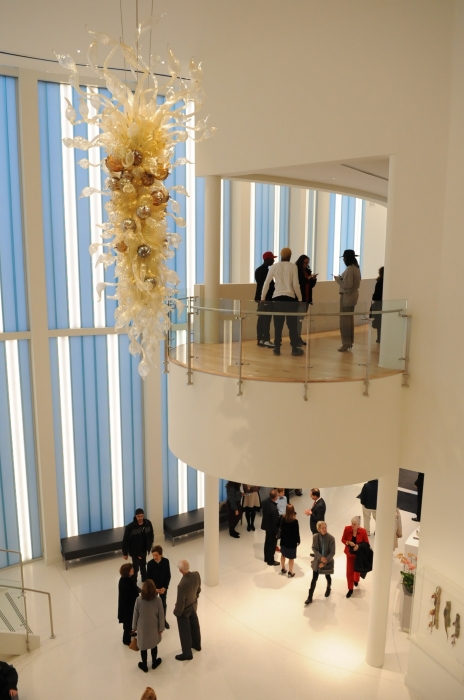 As visitors entered the Barry Art Museum during its grand opening this week, most looked across the entrance and then up. Eyes wide, they took in the elegant setting - the 40-foot-tall serpentine glass wall, the curved staircase, the sparkling white interior.

Carolyn Barry, who along with her husband, Richard, gave $37 million - nearly 300 works of art plus funding for the 24,000-square-foot building and more - to Old Dominion University, greeted visitors. Kim T. Miller approached her, barely holding back tears.

"Thank you for doing so much for this place I love so much," Miller told her. "We're so lucky to have you."

Miller, an ODU grad who works in the engineering management and systems engineering department, said she sees the Museum as an "absolute heartfelt contribution" from the Barrys, whose gift is the largest donation in the University's history.

Also greeting guests were University President John R. Broderick, First Lady Kate Broderick and Robert Wojtowicz, dean of the Graduate School and professor of art history. They, along with retired Chief Operating Officer David Harnage "quietly spent hours upon hours trying to determine how to transform a generous gift offer" from the Barrys into a new museum, now housed in a stunning, two-story facility, Broderick said.

The Museum opened less than three years after the major gift was announced - an impressive pace under the best of circumstances.

"I'm just amazed that a group of friends, artists, University officials and experts could come together and build a museum in under three years," Carolyn Barry said. "This is such an exciting time for us."

The Barrys' art collection, most of which is on display, grew through the decades, from antique dolls Carolyn Barry began acquiring as a child to marine paintings to the contemporary glass sculpture that constitutes the largest portion of their artworks. Modernist paintings were bought partly to complement the glass, she said.

Their urge to collect, and then to create a Museum, stems from a belief that "art is important to a well-lived life," Richard Barry said.

Each gallery has a theme and title. "A Passion for Color and Form," explodes with bold hues and expressiveness.

In the center of that gallery is a large "Amulet Basket" made of neon-bright glass seemingly bursting from the form's center. The work is part of a series made by internationally known artist Laura Donefer, who drove from her home in rural Ontario, Canada, to attend the grand opening.

"I'm speechless," Donefer said as she looked around at all the works by top glass artists, including Therman Statom and Erwin Eisch. "To be here, next to them, in this pantheon of greats. These are all people who have inspired me. I actually had some tears."

Mitch Brindley, Old Dominion's sailing coach, stood upstairs in a gallery titled "A Passion for Marine Art," staring at an Edward Moran 1877 painting of the third America's Cup race. "That's a lot of action and drama," he said. The schooner, flying along on rough seas, "shows the passion of sailing, really."

In the same gallery visitors may draw their responses to the art and hang them, a nod to Old Dominion University's emphasis on experiential learning opportunities.

"Everybody looks at art differently, and we want to encourage that," Page stressed. "Don't be shy. This is your space!"

The final gallery, "A Passion for the Doll as Art," contains about 90 historically significant antique dolls, many from 19th-century France, a golden era for dollmaking.

Stuart Holbrook, president of Theriault's, the premier auction house for antique dolls, said the gallery constitutes the first permanent display of antique dolls in an art museum. "This is truly a world-class moment in the history of dolls," he said.

"These dolls reflect the society in which they were made, the historical periods they represent and the evolution of fashion over time," Carolyn Barry said. "So, the 'sleeper' feature of the Museum just might be the doll gallery."

One section showcases automata, plural for automaton. "These are dolls, but they come to life," Holbrook said. The mechanical, usually windup, figures that could play a harp or pour a drink were a form of 19th-century parlor entertainment.

Page is excited about using the automata collection to aid the study of robotics and artificial intelligence at Old Dominion. "We can create exhibitions that will address artificial humans because there are many divisions on campus using them," she said.

Richard Barry will continue to be involved as president of the Museum's board of directors and Carolyn Barry as vice president. "The Barrys' generosity to this project, to this University and to this community is nothing short of extraordinary," said Broderick, who presented the Barrys with the University Medal for outstanding service.

The Museum's opening "culminates nearly a decade nurturing the 'Arts in the Village' concept here at Old Dominion," Broderick continued, naming the Gordon Art Galleries, the Goode Theatre, the University Theatre and related rehearsal space, Brock Commons and the Hixon and Barry art buildings as part of that village.

"All have sent a message loud and clear that Old Dominion University is committed in every way to supporting and celebrating the arts." 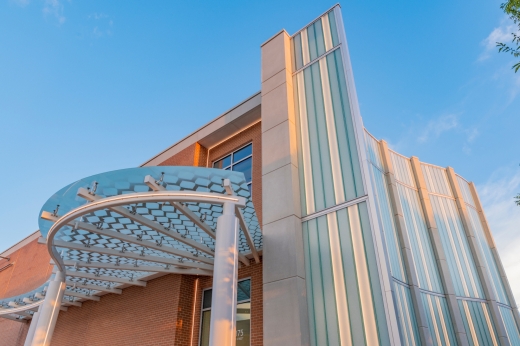 The Barry Art Museum Opens to the Public 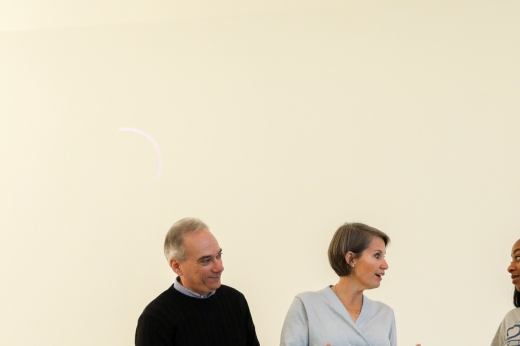 The work of sculptor Howard Ben Tré and artist David Small will be on display at the Museum's opening Nov. 14. (More) 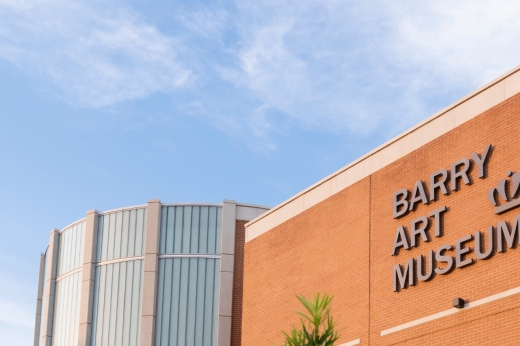 The glass sculpture is intertwined with Czech Republic's Communist past. (More)