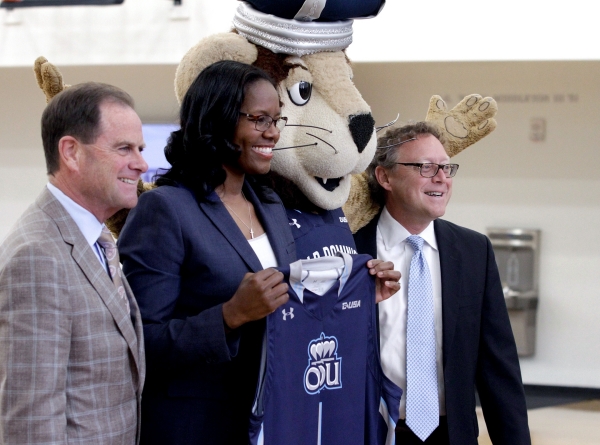 Following an 11-year professional playing career, McCray-Penson moved into the coaching ranks in 2006, spending two seasons at Western Kentucky before joining the Gamecocks. A three-time WNBA All-Star and the 1996-97 American Basketball League's Most Valuable Player, McCray-Penson has proven to be a standout recruiter who helped South Carolina land the nation's No. 2 recruiting class and the top player in the country in 2014.

"I welcome Nikki McCray-Penson, her husband Thomas, and their son, Thomas, Jr., to the ODU family," said Old Dominion President John R. Broderick. "Nikki is a proven winner at every level, both as an athlete and a coach. She impressed me during our interview with her preparation and knowledge of ODU as an institution as well as her appreciation of the women's basketball program and its history. She stressed to me her commitment will be never-ending when it comes to her players equally excelling as students and engaged citizens."

Selig said current and future student-athletes will benefit tremendously on and off the court from McCray-Penson's playing and coaching experiences, both of which have been at the highest levels in the world for women's basketball.

"I am convinced our fans will embrace and welcome Coach McCray's outgoing and affable personality," Selig said. "Coach McCray represents the perfect fit for all of Lady Monarch basketball: our student-athletes, Lady Monarch alumnae, basketball fans, and our entire Hampton Road's community."

"I could not be more excited to join the Old Dominion program, its tradition, its people and its fan base," said McCray-Penson. "There is so much opportunity to bring the tradition of winning back to ODU because of the investment by the University's leadership and the fan base. I felt it the minute I stepped on campus and I can't wait to get to Norfolk and begin the process of shaping this program."

McCray-Penson takes over the reins of one of the most storied women's basketball programs in college basketball. The Lady Monarchs have over 1,000 program wins, three national championships, 25 NCAA Tournament appearances, 17 conference championships and 55 All-Americans.

"Although this may be my first head coaching job, I have the comfort and wisdom gathered through my career around incredible head coaches," McCray-Penson said. "From playing for Pat Summitt at Tennessee and amazing USA Basketball coaches, to being alongside Mary Cowles at Western Kentucky and Dawn Staley for the last nine years at South Carolina, I am confident that they have prepared me for what lies ahead. I will take everything I have learned from them, mold it with my core values and pour it into building this program."

McCray-Penson got her start in coaching at Western Kentucky where she played a key role in recruiting. With her on the staff, she helped lead the Lady Toppers to a 49-17 record, which included a WNIT semifinal appearance in 2006-07 and a Sun Belt Tournament title and a berth in the NCAA Tournament in 2007-08.

Prior to moving into the coaching world, McCray-Penson enjoyed a nine-year career in the WNBA, following a two-year stint in the ABL. She signed her first professional playing contract with the ABL's Columbus Quest in 1996 and proceeded to lead the team to the league championship, earning league MVP honors along the way. Joining the WNBA's Washington Mystics in 1998, McCray-Penson was the team's leading scorer in each of her first two seasons and played in the WNBA All-Star game three times in her four years in Washington. She earned a starting spot in the league's inaugural All-Star game in 1999 and was the leading vote-getter among Eastern Conference guards in 2000.

McCray-Penson went on to play five more seasons in the WNBA, spending two with the Indiana Fever and one each with the Phoenix Mercury, the San Antonio Silver Stars and the Chicago Sky prior to her retirement at the end of the 2006 season. With 2,528 points, she finished her career ranked 24th on the WNBA's career scoring list. Averaging 10.1 points per game, she was a career 41.3 percent shooter.

A veteran of international basketball as well, McCray-Penson was part of the USA Basketball program on three separate occasions. Those stints were highlighted by trips to the Olympic Games in 1996 and 2000, both of which resulted in gold medals for the United States. She was a key element on the 1995-96 team that spent more than a year together in residency, something never done before in USA Basketball's history. The effort helped the group to 60-0 record in international competition and sparked two professional women's basketball leagues in the United States.

In her four-year career playing under Pat Summitt at Tennessee, McCray-Penson keyed three SEC regular-season titles, two conference tournament championships and four NCAA Tournament appearances for the Lady Vols. In addition to helping UT build a 122-11 record, McCray-Penson picked up All-America and SEC Player of the Year honors in both her junior and senior years. She scored 1,572 career points, a number that still ranks her among the Lady Vols' all-time top 15.

"As President Broderick and I reviewed the candidates for our head coaching vacancy, one individual clearly stood out to us as being exceptional in every measurable dimension," Selig said. "Coach McCray has competed at the highest level as a student-athlete at Tennessee, where she was named twice the SEC Player of the Year and a Kodak First Team All-American. However, most impressive to us, was Nikki's twice being named an Academic All-American. We knew we had an excellent blend and balance of athletics and academics in Coach McCray based upon her personal successes while a student-athlete."

McCray-Penson graduated from Tennessee in 1995 with a Bachelor of Science in Education. She is married to Thomas Penson, and they have a four-year old son, Thomas Nikson Penson.