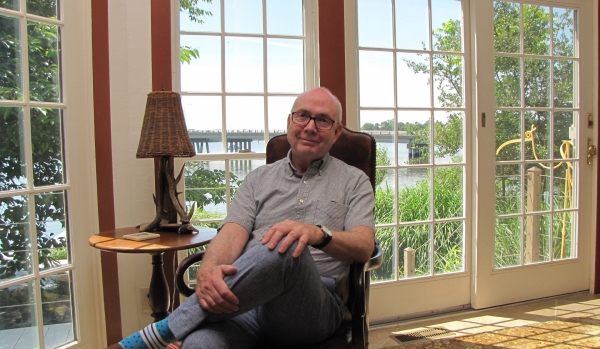 It's safe to say that hang gliding landed George Maihafer at Old Dominion 35 years ago. But it was the personal and professional growth he experienced on campus that kept him at the University until his retirement last year.

In 2005, Maihafer set up the University's first physical therapy scholarship. He is building on that in his estate planning with a new endowment - the George Maihafer Scholarship in Physical Therapy - that will be valued at about $1.7 million.

"Education is critical," said Maihafer, who served as chairman of the School of Physical Therapy. "But the cost across the board is extremely expensive, especially graduate school education. The best bang for my buck is to leave the vast majority of my estate to Old Dominion University so they can in turn use that money to provide as much scholarship money for students as possible in the future."

Maihafer said his affinity for physical therapy was stoked when he was a pool director and counselor at a camp for children with disabilities in Syracuse, N.Y. "I thought to myself, 'What a great idea; I could stay at the pool and I could keep my tan,'" he said.

Maihafer became a summer fixture at the camp for five years. His interest in becoming a physical therapist didn't waver.

Maihafer grew up in a family that prized reading, travel and cohesiveness. His father had to retire after developing multiple sclerosis, which squeezed the family's finances. But being a good student paid off.

"At the time, you could take the Regents test and if you scored in the top 10 percent of state students, you could get free tuition, room and board at the state school of your choosing," Maihafer said. That was how he paid for his first leg of college at the State University of New York at Oswego. He went on to Upstate Medical University in Syracuse, where he earned his bachelor's in physical therapy in 1973.

After a few jobs, he received a Kellogg Foundation Scholarship at the University of Kentucky in Lexington, which paid for his tuition, room and board as he pursued his master's in clinical classroom teaching. He then headed to Southside Regional Medical Center in Petersburg, Va., where he served as chief physical therapist.

But his frustrations grew as he trained people only to watch them leave for other jobs.

Maihafer wanted a change. He took a week off work to figure out his future.

"I went out to the Outer Banks in October, when it was extremely quiet," he said. "And I learned to hang glide."

Maihafer spent his mornings hang gliding and his afternoons compiling a list of what he wanted and didn't want in life.

Pursuing those goals, Maihafer landed at ODU in 1982 as the academic coordinator of clinical education in what was then the School of Community Health Professions and Physical Therapy. At the same time, he began working on his doctorate, with the University covering two-thirds of the cost.

'The power of education'

In 2005, he created a tribute to his parents - the George and Kate Maihafer Scholarship, which has provided financial assistance to several physical therapy students.

"My parents are the reason I am where I am," he said. "When I needed to be pushed in the right direction, they were there. They instilled in me the strong belief in the power of education."

This spring Maihafer created the George Maihafer Scholarship in Physical Therapy in gratitude for what he received at Old Dominion.

"It provided core stability," he said. "It's a great place to work. It helped me develop my skills and gave me the flexibility to become a mature adult."

Maihafer, in turn, helped guide more than 1,000 students during his tenure at the University.

"When I see graduates from our program come up to me and pat me on the back - maybe in a grocery store or at a meeting - and tell me how wonderful their life is going and tell me how much they appreciate their education at Old Dominion University - that's gold. And that happens more often than not, and it makes my day when it does."