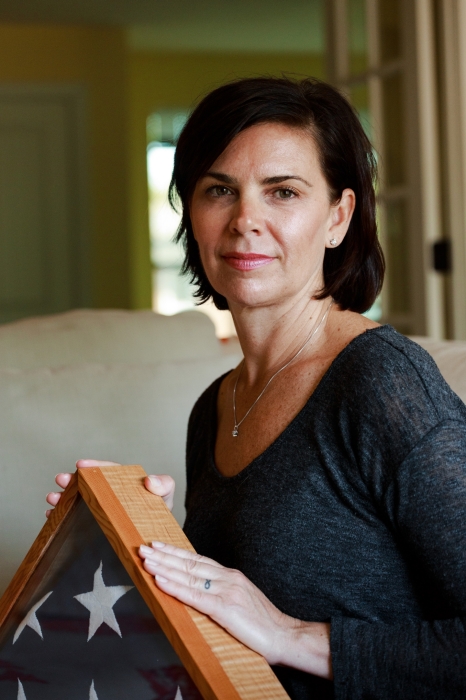 Jennifer Mullen Collins (M.P.A. '04) had just received the worst news of her life. Her husband, Dave, an ex-SEAL suffering depression, insomnia and the inability to perform simple functions like start a car, had killed himself.

On that raw, overcast March evening in 2014, Jennifer sat in her living room in Virginia Beach, surrounded by five police detectives and ex-SEALs.

Most of her husband's friends, the toughest of the tough, had dissolved into tears. For Jennifer, the crying would come later. That night, she remained clear-eyed and focused, snapping into crisis-response mode - a familiar role for her as assistant vice president for marketing and communications at Old Dominion University.

She asked the police about next steps. She mentally formed a list of people to call (dozens, given Dave's penchant of befriending the world) and assigned tasks to the others. And she decided that night to donate Dave's brain for research.

To help find out what really killed him. To keep other members of the service and their families from going through this hell.

Three months later, the results came in: Dave had suffered from a degenerative brain disease better-known for plaguing former football players. His was among the case studies cited in an article last year in a leading science journal that offered a breakthrough in assessing injuries suffered by victims of severe blasts.

Jennifer has stayed up-to-date on the research and sometimes gives speeches about it. "I've learned more about the brain than anybody with my background should know," she said.

She left ODU in 2014 and joined the SEAL Legacy Foundation as grant administrator the next year. It allows her to spend more time with her two children and to "give back" the help she received after Dave's death.

She's also changed her personality - less rushed, more easy-going. "There are days I swear I'm becoming him," Jennifer, 47, said of her late husband.

Jennifer Mullen met Dave Collins through mutual friends on New Year's Eve at the end of 1992 in Philadelphia, her hometown. He struck her "as very quiet, kind of cute."

They got together a few more times with friends. He told her he didn't want a girlfriend. "Eventually, I guess I just wore him down," she said. They began dating in 1993, moved to Virginia Beach in 1996, when he joined the SEALs, and married in 2001.

They proved the "opposites attract" theory.

He was gregarious, fun-loving and spontaneous.

"You never knew what Dave would do next," said Jennifer's friend Karen Meier, Old Dominion's assistant vice president for community engagement. "It was always important to him to make you laugh and feel good. He lived life to the fullest, and he wanted to make sure you did, too."

In contrast, Jennifer said, "I'm a big city girl. I'm a little more guarded and suspicious. People would have said about me, 'She needs to loosen up a little bit.'"

Mullen joined Old Dominion in 1998 as a public relations specialist and rose to assistant vice president, overseeing such departments as public relations, marketing and publications. Meanwhile, Dave was deployed around the world, including Afghanistan, Iraq and South America.

Jennifer knew a few things - one tour involved drug interdiction in South America - but didn't ask for details. "I don't recall being nervous," she said. "I had faith in him and all of his teammates. They're the best of the best."

Dave retired from the SEALs in 2012. But Jennifer had spotted the first signs of trouble in 2008. Dave - totally out of character - lost interest in socializing. Jennifer chalked it up to a desire to focus on his family.

After he left the Navy, "he got farther and farther away from us." His temper flared. He couldn't sleep. He'd forget to pick up their daughter from school. He set a rigid schedule of household tasks - laundry one day, the kids' nails another.

Jennifer now sees those schedules as a way to preserve control: "He was very good at maintaining. He was the biggest impediment to his own care."

That veneer of normalcy was shattered in an early-morning phone call from Utah, where Dave was on a business trip in January 2014. He hadn't slept for five days, he told her. "The whole conversation was that he couldn't do anything anymore. I never heard him like that. He prided himself on doing anything he put his mind to."

When she picked him up at the airport, he was shaking, and he shook most of that night. The next month, Dave went to a nationally renowned brain center in Dallas, where he was diagnosed with traumatic brain injury and post-traumatic stress disorder. He agreed to undergo therapy in Virginia Beach.

Four days after his return, he killed himself. In his final text to Jennifer, Dave told her he couldn't pick up their son from school. "So sorry baby," he wrote. "I love you all."

Jennifer had no doubts about donating Dave's brain. "I worked at universities my whole career," she said. "I knew the value of research."

But she didn't know how quickly the donation would make an impact. First came a report from Dr. Daniel Perl, professor of pathology at Uniformed Services University of the Health Sciences in Bethesda, Maryland, three months after Dave's death.

An examination of his brain found that Dave suffered from CTE, or chronic traumatic encephalopathy, a condition mostly noted in former NFL players. "Here was positive proof that nobody could refute that he died in combat or in training for his country," Jennifer said.

Then in June 2016, the journal Lancet published an article, co-written by Perl, based on further research on the brains of 21 people, including Dave, who was referred to as "Case 1." It found a "distinct and previously undescribed pattern" of scarring in certain parts of the brain in victims of blasts.

To Jennifer, the research revises the perception of shell shock that first developed in World War I, proving that combat veterans suffer "physical damage that also has psychological consequences."

The article concludes with the hope that researchers "will find ways to make these injuries not only visible, but also treatable for service members, veterans and civilians."

"That's why I donated his brain in the first place," Jennifer said, "to help unlock a piece of the puzzle. The better we understand what's happening to them, the better we can serve them and later generations."

She credits a wide support system for keeping her and their two children afloat and functioning. It includes the local military community, particularly Naval Special Warfare families; her neighbors, whom she calls her "second husbands," and her Old Dominion network.

"The people at ODU were amazing," Jennifer said - taking charge of the flowers for Dave's funeral and the catering afterward, paying her visits round the clock. But she knew she couldn't go back.

"My priorities instantly shifted to the kids and to ensuring they were going to be OK," she said. "I couldn't do that in the job I was in; it required so much of my attention."

In January 2015, Jennifer became grant administrator for the SEAL Legacy Foundation. It's based in Austin, Texas, but she can work from home.

The foundation helps current and former SEALs and their families in a variety of ways, including survivor support and college scholarships. Jennifer received assistance from the foundation for Dave's funeral expenses.

She reviews applications, pays vendors, follows through with families, and assists with fundraising and communications. A recent case involved making a bathroom handicapped-accessible for the wife of a SEAL.

"Sometimes I share my story with them to let them know they're in good hands with somebody who knows what they're facing, " Jennifer said.

Year by year, it's gotten tougher, not easier.

"The first year, I was on autopilot," she said. "I had all this energy to expend and this mission to tell people what happened and to make a difference." The second year, "things slowed down," and "2016 was awful."

"When everything is quiet, you have time to stop and think: 'OK, this is forever.' It's a very difficult thing to know that you'll never have that again," Jennifer said, breaking into soft tears.

"Jen's been able to take what's happened to her family and show people how to live," Meier said. "She's strong, even when she feels like crying, positive and peaceful when most would be lost."

As with all things, she has been deliberate and purposeful dealing with her children about Dave and his death. "Daddy's brain was injured from his work as a SEAL," she initially told them.

"I'm very open, but I let them lead the way. I refuse to avoid it and I refuse to put any shame into the conversation."

She displays pictures of Dave at home, but "not too many" to avoid the appearance of a shrine.

"We talk about him all the time. I tell them all the great things about him. He really was unlike anybody I ever met. But I sometimes tell them about the times he got on my nerves, to make him real."

Every day, she spots more of him in her children.

Grace, who is 12, "has her father's spirit. She loves a good party." Sam, 9, has his mannerisms: "The way he holds his fork, the way he stands, the way he uses his hands. He moves them exactly like Dave."

This article appeared in the spring issue of Monarch magazine. To see more of the magazine, go to www.odu.edu/monarchmag