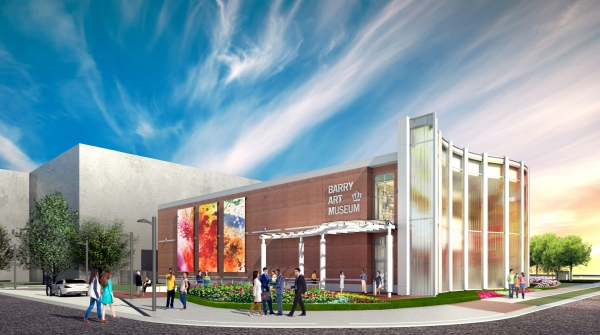 Old Dominion University will break ground April 18 on a new museum that will further enhance Norfolk's growing international reputation as a fine arts destination and hub for the emerging glass sculpture genre.

The event for the Barry Art Museum will be held at 11 a.m. at the construction site on Hampton Boulevard at 43rd Street. Speakers will include state Del. Chris Jones, Norfolk Mayor Kenneth Alexander and ODU President John R. Broderick.

The 24,000-square-foot museum was made possible by a gift from Richard and Carolyn Barry valued over time at more than $35 million - the largest donation in ODU's history. The two-story building, which is scheduled to open in the fall of 2018, will be constructed with room for expansion. It will provide galleries for the permanent collection, as well as a large changing gallery for faculty and traveling exhibitions.

Architectural glass will be a defining feature of the building's exterior. The building will also function as an educational asset not only for ODU's undergraduate and graduate arts programs, but for other related disciplines, as well as the general education curriculum. New academic and community programs will be developed in conjunction with the museum and its collections.

President Broderick said the museum will enhance the University's commitment to the arts while becoming one of Hampton Roads' major cultural destinations.

"The Barrys' collection tells a story about the rise of American glass artists at the forefront of the international scene," he said. "The new museum will frame this story beautifully, while providing a starting point for other stories yet to be told."

Karen Rudd, Norfolk's cultural affairs manager, said the museum will extend the city's allure as an arts destination and reputation as a hub for the emerging glass art genre.

"People around the world are recognizing that Norfolk has great glass collections," she said, noting the international Glass Art Society's decision to hold its 2017 conference in the city.

Jutta-Annette Page, executive director of the Barry Art Museum, characterized glass art as a relatively new field. The first experimental workshops took place in 1962 at the Toledo Museum of Art, where Page was formerly the senior curator for glass and decorative arts before joining Old Dominion.

Because entrepreneurship is at the heart of innovations in glass art, the museum will mesh well with the University's mission to support and nurture an interdisciplinary entrepreneurial culture.

"I'm happy that we have a center for entrepreneurship right here on campus," Page said. "Museums in other parts of the country dream about becoming labs for artists, but it's already here. There are lots of great possibilities at Old Dominion."

In addition, the museum will display paintings, drawings and prints selected from the University's general collection, including works by former ODU faculty members A.B. Jackson and Charles Sibley.

The Barry Art Museum is intended to enrich the range of regional public art collections, including that of the Chrysler Museum of Art, said Robert Wojtowicz, a professor of art history and dean of the University's Graduate School.

"Norfolk is now of a size to support more than one museum," Wojtowicz said. "Having a depth of cultural institutions makes it a vibrant urban center. This will not be a competitor of the Chrysler but rather a complement."

Wojtowicz added that programming at the Barry Art Museum will include opportunities to further interdisciplinary education, incorporating a variety of STEM fields.

"We want it to support not only the art department but also our engineers, our nurses, our physics majors," he said. "We want to be a resource for our entire campus."