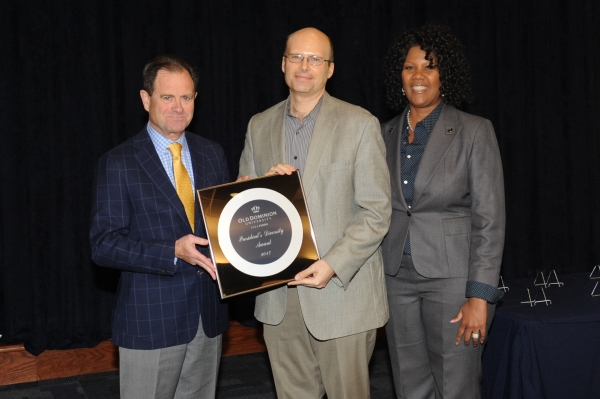 Eleven members of the Old Dominion University community were recently presented with President John R. Broderick Diversity Champion Awards, for the spring 2017 semester, in recognition of their commitment to advancing the University's values of diversity, inclusion and equity.

From the fall 2016 and spring 2017 recipients, the University's Champion of Diversity Award was presented to Jeffry Moe, assistant professor in the Department of Counseling and Human Services.

Moe is described as a "very humble, quiet, and respectful individual." He forged a relationship with the Counseling Department; continues to have an "aggressive research agenda in the area of LGBT issues" and has been instrumental in working on initiatives sponsored by ODU's Safe Space Committee. His efforts have resulted in the creation of practicum and internships for graduate counseling students pursuing their master's degree. Not only has Moe promoted diversity and inclusion at the University, he has done a great deal to foster it elsewhere in the Hampton Roads region. He's promoted fundraisers in order to raise proceeds for Access AIDS Care and is the president-elect for the Virginia Association of LGBT Issues in Counseling (VA-ALGBTIC).

Nominations for the fall 2017 semester will be accepted beginning in August and may be submitted by anyone. Nominators should explain how the nominee demonstrates an exceptional understanding of diversity, inclusion and equity beyond the call of duty. Nominations can be submitted online to the Office of Institutional Equity and Diversity, or delivered in person to 1301 Spong Hall at Old Dominion University.

The Diversity Champion Award has been presented at ODU since the 1990s, and ODU's President, John R. Broderick was one of its earliest recipients.

The annual award was renamed for President Broderick, starting with the 2014-15 school year. The renaming was decided upon by the Office of Institutional Equity and Diversity after an overwhelming positive response from the campus community to Broderick's support of diversity, inclusion and equity.