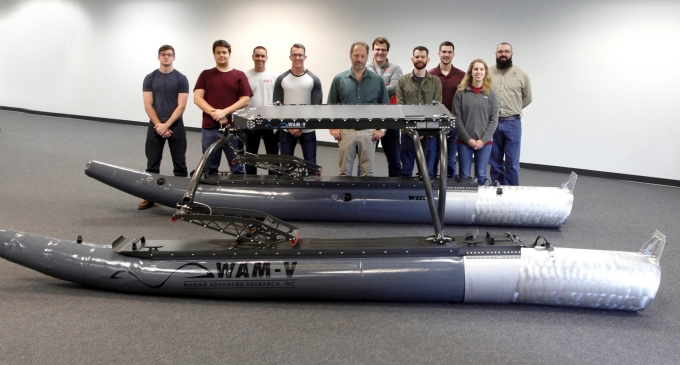 The Wave Adaptive Modular Vessel, more widely known as a WAM-V, was donated to ODU by the Office of Naval Research via the Foundation of the Association for Unmanned Vehicle Systems International.

Under the leadership of Yiannis Papelis, research professor at ODU's Virginia Modeling Analysis and Simulation Center (VMASC), engineering students are transforming the WAM-V, a lightweight, easy-to assemble, catamaran, into an USV with capabilities such as launching and docking on its own, recognizing objects and navigating in complex environments.

The project is part of ODU's ongoing relationship with the CCD's Unmanned Surface Vehicle Navy Lab. The lab provides a collaborative environment for Navy laboratories and warfare centers and their partners in academia and industry to develop autonomous capability for sea surface craft.

One of the project's goals is to have ODU students compete with the WAM-V in the 2018 International Maritime Robot-X Challenge, an international competition held biennially. Past locations included Singapore (2014) and Hawaii (2016). The challenge is designed to develop maritime autonomy, and it includes aerial and submersible tasks to broaden students' exposure to robotics applications and technologies.

"The ability for students to take what they learn in the classroom and apply that knowledge in a real world setting to gain experience is something that sets ODU apart from other universities," said Papelis, who served as a 2016 Maritime Robot-X Challenge judge at the invitation of the Office of Naval Research. "Knowing the capabilities we have at ODU, I wanted to get the university involved with Robot-X. I knew we could compete."

The project also highlights ODU's multidisciplinary approach, with students from a variety of disciplines, including marketing, finance, business, art and web design, supporting the Robot-X event, including seeking business sponsorships.

The USV project already has garnered the attention of ODU alumnus Johnny Garcia, president and CEO of SimIS, a Hampton Roads software company that is a pioneer in the modeling and simulation community. SimIS recently provided $50,000 to support the development of the WAM-V. The ODU USV project team is seeking additional sponsorship to fully fund participation in Robot-X.

ODU's strong research focus and location near a myriad of water types, including ocean, rivers, bays and out of sightline water, create the ideal environment to collaborate on Naval research and development.

"The USV project collaboration between ODU, the Naval Surface Warfare Center and local industry highlights the unique value proposition ODU offers for the benefit of its students, the military and the Hampton Roads region," said Papelis.

For more information, email the USV project team at robotx@odu.edu.