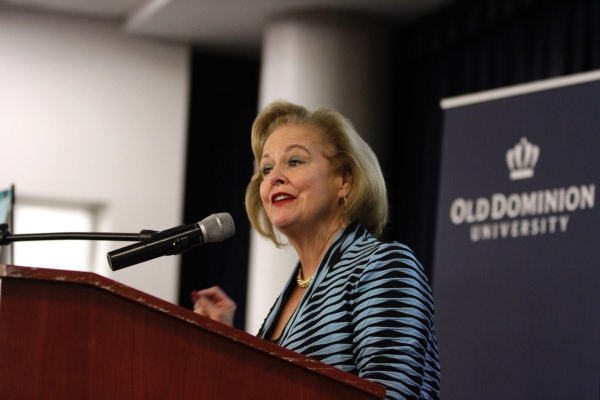 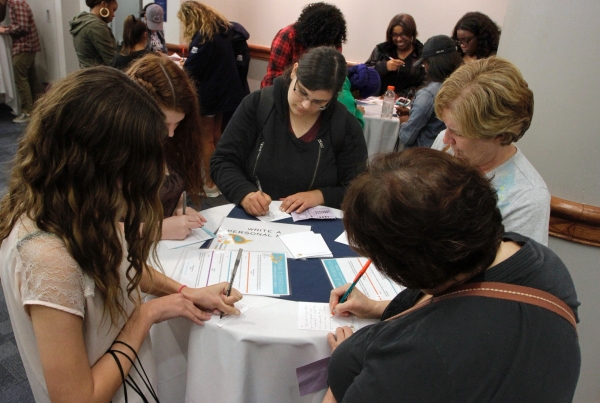 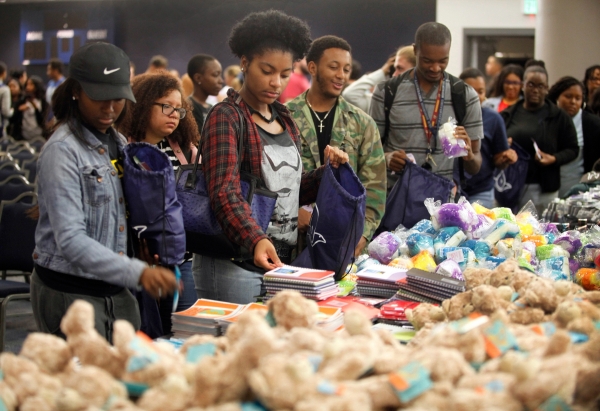 About 400 Old Dominion students gathered at the Ted Constant Convocation Center Nov. 6 to put together comfort boxes for victims of sexual assault as part of an annual "Celebration Night" event with the non-profit organization Fear 2 Freedom.

"They say one in six females, and one in 16 men, will be assaulted during their years in college. That's just unacceptable. Let's stand up today and be a voice for the voiceless," Trible said. "Our mission at Fear 2 Freedom is to restore hope and dignity to those that have been sexually assaulted. But on the other side of it, to empower each and every one of you to be the change, to change the cultural understanding on your college campus, ODU's campus, that you are so proud of and then to make a difference in the world and the community around you."

The packages, which are described by the organization as "a medical kit for the heart," are meant for distribution to sexual assault victims who have to undergo a PERK examination, at which time their clothing is taken for forensic evidence. The kits contains items such as a change of clothes, toiletries, a journal (or book for children) and a personal note handwritten by the volunteer who packed the box.

Since its inception, Fear 2 Freedom has delivered more than 17,000 kits to women and children affected by sexual abuse through partnerships with 23 universities as well as 36 hospitals and community groups.

In opening remarks, ODU President John R. Broderick commented on recent sexual assault and harassment scandals across many occupational fields from entertainment, to news media, professional sports and government that emerged in the wake accusations against Hollywood producer Harvey Weinstein.

He noted a recent Los Angeles Times column that, in the past decade, sexual assault and harassment "has been exposed in seemingly every corner of American life."

"We are proud to support Fear 2 Freedom for the fourth year, because we all know too well that sexual assault is often committed outside of the headlines and numerous times it's not reported at all. ODU has a comprehensive education and information campaign with over 60 prevention initiatives on the topics of sexual violence, dating violence and stalking, to reach every student, but we all know that's never enough."

ODU First Lady Kate Broderick added that it is important to know when to say something or intervene to stop or prevent abuse.

"We must remain diligent and unwavering. Not only this semester, or next semester, but day after day," she said. "I don't want anyone in this room to suffer what Rose McGowan went through with Harvey Weinstein where no one believed her claim for many years. But now, everyone is listening because so many women came forward. We cannot allow society to set such a low standard."

For more information about the organization, visit the Fear 2 Freedom website. Information about sexual assault prevention and available resources can be found at the ODU S.A.F.E. Program website.