Big Blue: Behind the Crown 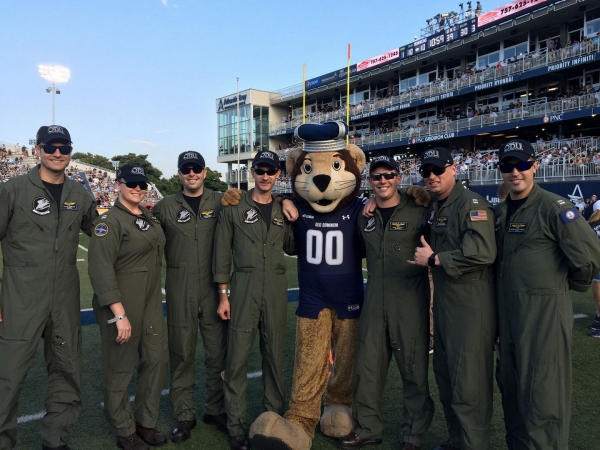 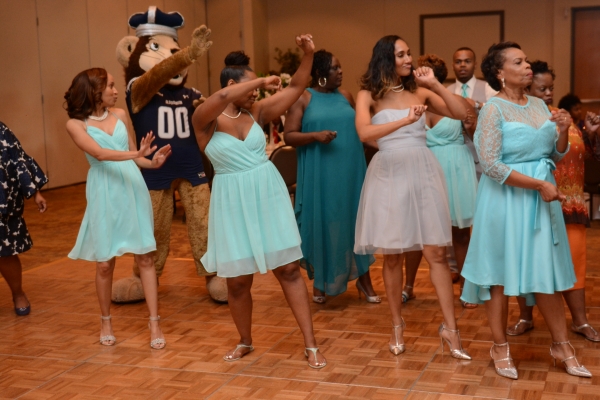 Big Blue dancing at a wedding.

May graduates Adam Horn and Ray Vittum had different majors and earned different degrees: Vittum received a bachelor's in information systems and technology, and Horn got a master's in aerospace engineering. But they had a common pursuit: Both appeared as Big Blue, the Old Dominion mascot.

"It's the best job in the world," Vittum said. "You get to do almost anything you want. You can grab a beer from a fan's hand and pretend to sip it."

For Vittum, one of the highlights was sinking a shot from half-court during a routine. Afterward, "I punted the ball into the student section, I was so juiced up." For Horn, it was shaking Brad Paisley's hand during a concert.

Here's more inside info on life as Big Blue from Horn and Vittum:

RATING EACH OTHER AS BIG BLUE

Horn on Vittum: "He's definitely the most chill mascot, but he loves to make people laugh."

HOW HOT IS IT?

Broiling. The outfit weighs about 50 pounds. Vittum: "When you get the head on, it's like your body is contained in this box, and it's so humid. You're completely soaked."

Horn: "There were some games I lost five pounds."

HOW MUCH TIME DOES IT TAKE?

Big Blue appears at every football and men's and women's basketball game, as well as other campus events. So it can be pretty busy in winter, when there might be two basketball games and one football game every week.

Football takes up the most time: Each game requires about eight hours, including the pep rally, pre-game shows and tapings of videos shown during the game. That's why the two alternated as Big Blue at every football game.

Vittum: "It's the little things that make it great, like when a kid holds his hand up and says, 'I got a high-five from Big Blue.'" Or winning over a fan "who's not happy to see you. Once you get a smile, you know you got to him."

Kids who pull Big Blue's tail or grab his costume. Or the football players who chest-bump Big Blue after he leads them across the field before a game.

HOW TO WIN OVER A FRIGHTENED CHILD

Get down on one knee to appear less imposing, and extend your hand for a shake, Vittum said. If the kid is still freaked out, hide behind his parents, as if he's the really scary one. "He'll think, 'What's going on? Why's he scared of me?'" and he'll start to relax, Horn said.

WHAT THEY WISH THEY COULD HAVE TOLD FANS

It's almost impossible to hear anything inside the Big Blue outfit. So if you say something to Big Blue and he doesn't respond, "we're not purposely ignoring you," Vittum said. "We either can't hear you or we have 30 seconds to get to the other side of the field."

THE OTHER PARTS OF THE JOB

Big Blue gets invited to weddings, hospitals, charity events and parades. Horn: "The best feeling we have is seeing kids' faces light up in the hospital. That tops everything."

For Horn, one of the scariest moments was at the Grand Illumination Parade in Norfolk. "It was pitch dark," he said, "and it was hard to see where you were going."

At weddings, "it can be a bit awkward; we're not the main attraction," Vittum said. "People love Big Blue, but people definitely get sick of him." Sometimes a 15-minute visit is more than enough.

Vittum: "Not thinking about it; I'm doing it."

OTHER FUN FACTS ON BIG BLUE

HOW OLD IS HE?

Old Dominion adopted Big Blue as its mascot in 1971. Early reviews weren't promising. The 1972 Troubadour described Big Blue as "a seedy-looking lion who serves as Mascot."

HE WAS THE CHAMPION, MY FRIENDS

Big Blue won the 2011 Capital One Mascot of the Year competition, besting such mascots as Brutus Buckeye from Ohio State and the Oregon Duck from the University of Oregon.