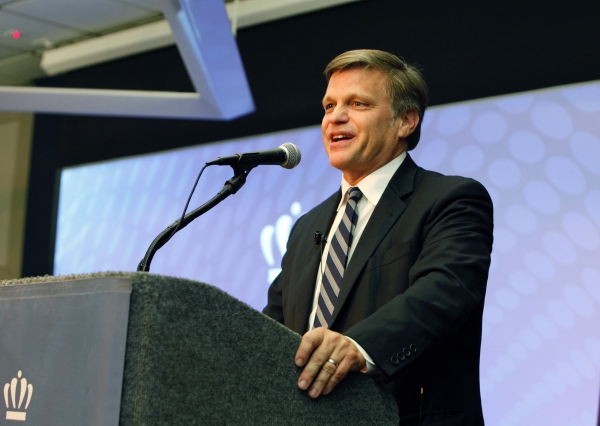 Donald Trump is charting a "new way" in American presidential politics, mixing a grab bag of positions in a "weird, all-American cocktail."

That was the assessment of presidential historian and author Douglas Brinkley, who delivered the first speech in the 2016-17 President's Lecture Series at Old Dominion University on Sept. 29.

Brinkley, author of books on Theodore Roosevelt, Franklin Roosevelt, John F. Kennedy, Gerald Ford, Jimmy Carter and Ronald Reagan, as well as many other American historical figures, also served as the keynote speaker of the 39th ODU Literary Festival, which was held Sept. 25 to 29.

His hour-long address, delivered to an audience of more than 600 in Webb University Center, traced the history of the American presidency, using that lens to analyze the current campaign between Democrat Hillary Clinton and Republican Donald Trump.

Brinkley, a professor of history at Rice University in Houston, began with a lengthy anecdote about Charles Thomson, the first secretary of the Continental Congress.

As the 13 colonies declared their independence from Great Britain and fought the Revolutionary War, and after the war was won and the new country founded, Thomson played many roles. One of them was to keep records of the activities of the young government.

Since this was a turbulent time, the records reflected very human frailties in the men who served in the Continental Congress. During the particularly rancorous election of 1800, between Thomas Jefferson and John Adams, Thomson decided to burn the records.

Brinkley told the ODU audience that Thomson's thinking was, "If we start playing petty politics with the presidency, then this young country will be doomed. So he started promoting the cult of the presidency."

Brinkley said that in the more than 200 years since, a conscious effort has been made to afford tremendous respect and legitimacy to the office of the president. But the polarization in the current political climate leads him to believe that the losing side will not endorse even the idea that the rival candidate can be a legitimate leader.

"I used to say that the election of 1800 was the worst in the history of the United States. This year's election may make me revisit this," Brinkley said.

Brinkley took the audience through America's notable presidents, from Lincoln ("Lincoln is every president's favorite president, because no matter how bad they have it, Lincoln had it worse") to the underrated James Polk, to Theodore Roosevelt, who was the first to greatly expand presidential power.

He then used two towering figures of the American presidency in the 20th century, Franklin Roosevelt and Ronald Reagan, and slotted most of their modern cohorts into one or the other camp. Brinkley said one modern presidential candidate defies this characterization - Donald Trump.

"Trump is a very confusing figure," Brinkley said. "He's picking not from this panorama of Roosevelt versus Reagan. He's trying a new way, taking strands of things, mixed in a weird all-American cocktail."

If Trump doesn't win in November, Brinkley ventures he won't fade away. "Not with Twitter."

And if he does win, the historian predicted: "This is a revolutionary moment in American politics. There are going to be a lot of street protests. We are heading toward a very, very ugly climate in this country."

But bringing his speech back to Thomson, Brinkley noted that the country survived the rancor in its early years and grew to become the world's major superpower.

"I do think it's important that we pull for whoever does win in November to succeed. I study American history for a living, and we have a tradition of two steps forward and one step back. But I haven't given up on the American Dream."