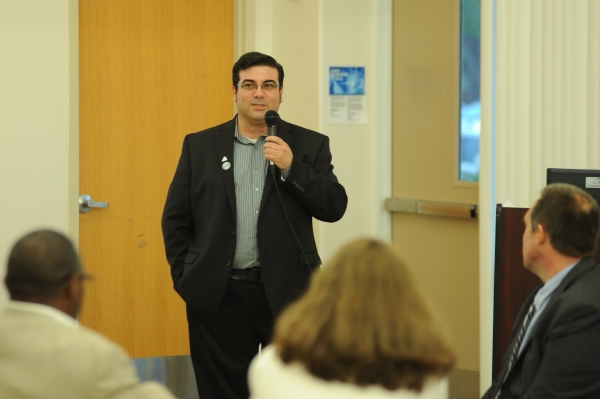 Avi Santo, director of ODU's Institute for the Humanities, speaks to the crowd at the unveiling. 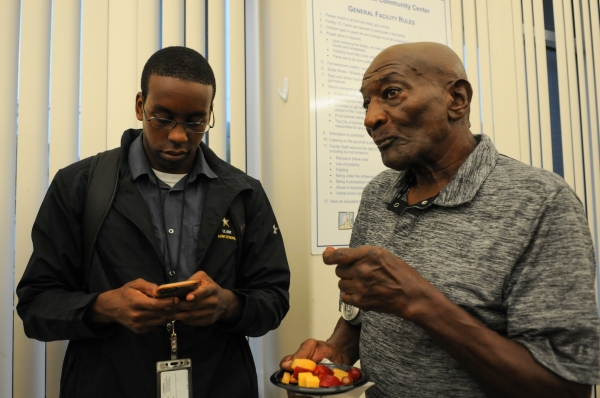 Project co-director Avi Santo told the audience of community and University leaders that the effort to create an interactive living history of Lambert's Point is accelerating to reach its full potential.

"This is the culmination of 18 months of work. It's also the beginning of our work," said Santo, the director of ODU's Institute for the Humanities. Tom Chapman, an associate professor of geography, helped lead the project for Old Dominion.

Students in geography and the humanities have been traversing Lambert's Point with cameras and tablets, gathering stories and information about the neighborhood, that stretch back to the first half of the 20th Century.

"We had a field course in geography two years ago where students went into the neighborhood. The intention was to extract a picture of what's going on now," Chapman said. "That's where these stories started to emerge."

The University and Lambert's Point have a shared experience forged through geography. The neighborhood at one time extended almost to 48th Street. Much of the current Old Dominion campus was built on land that was part of the neighborhood. The project is unearthing connections between campus and community that goes back decades, Santo said.

Old Dominion President John R. Broderick delivered welcoming remarks at the Sept. 20 event. He revealed that the University will dedicate plaques on campus where historic Lambert's Point landmarks formerly stood, in recognition of the close bond between community and campus that dates to the University's beginnings.

"We talk a lot about connecting our teaching and research to a community. A project like this goes far beyond the faculty and community side," President Broderick said. "It's another reminder to our friends and neighbors in Lambert's Point that we share a unique history."

The Old Dominion campus sits on the former sites of historic landmarks such as the original First Baptist Church of Lambert's Point, founded in 1893; and the Smallwood School, an African-American elementary school near where the University's Mills Godwin Jr. Life Sciences Building stands.

President Broderick said the University is "honored" to create plaques to commemorate these significant landmarks. "That way people who come across our campus will know that this part of history will always be part of the Old Dominion community going forward," he said.

Michael Hucles, an associate professor of history at Old Dominion and a noted historian of African-Americans in Hampton Roads, spoke at the event about the significance of place in neighborhoods.

"We see the story of the ways communities develop," Hucles said. "In neighborhoods like Lambert's Point you got to know your surroundings. Those important stories connect to physical spaces, as well as the people. The fact that many of these landmarks are gone makes telling these stories so very important."

The project will continue to seek stories from current and former residents of the neighborhood. Throughout the fall, every Tuesday and Thursday afternoon, and the third Saturday of every month, students will host sessions at the Lambert's Point Community Center for anyone who wants to tell their story.

A computer terminal has been set up at the center, for residents to access the Mapping Lambert's Point website, and add their stories and photographs.

Teresa Hood-Jenkins, who grew up in the neighborhood before moving away when she married in 1975, attended the Sept. 20 launch event. She said Lambert's Point has a wealth of stories to tell.

"This is such a fantastic thing. I think it's absolutely wonderful to come back and share your experiences about a community," she said, adding that friends from Lambert's Point who live around Hampton Roads have already told her about stories they intend to share.