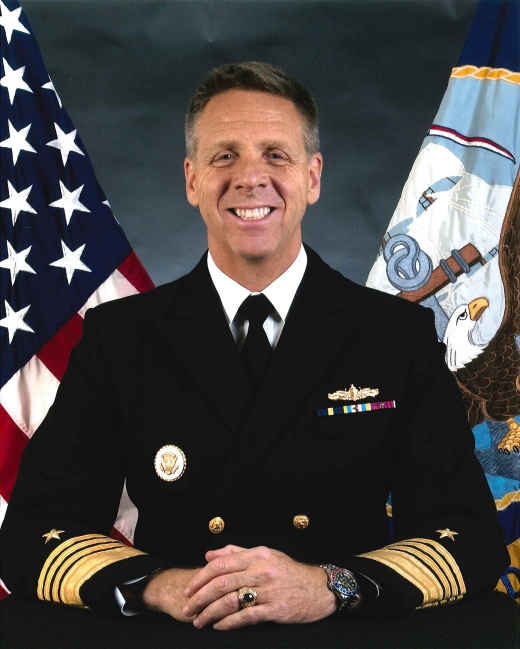 Admiral Philip S. Davidson, commander of U.S. Fleet Forces Command, will deliver the first address of this season's lineup for the Economics Club of Hampton Roads on Wednesday, Sept. 28.

The Economics Club, created in 1991 by former Old Dominion University President James V. Koch, is an organization for business and community leaders who share an interest in the practical implications of the intersection of economics and events. Given the immense impact that the Department of Defense has on Hampton Roads, military commanders provide tremendous insight into trends that will affect the entire economy.

Davidson, who has deployed around the globe on frigates, destroyers, cruisers and aircraft carriers in a career that spans 34 years, will speak to the audience of local decision-makers from noon - 1:30 p.m. at the Norfolk Marriott Waterside. The World Affairs Council of Hampton Roads is co-sponsoring the event.

Tickets for the event are free for members of the Economics Club, and $40 for non-members. Register online anytime or in person, starting at 11:30 a.m. on the day of the event.

Davidson is from St. Louis, Missouri and a 1982 graduate of the U.S. Naval Academy. He assumed command of U.S. Fleet Forces Command/Naval Forces U.S. Northern Command in 2014.

In his most recent assignment, he was commander of the U.S. 6th Fleet and Naval Striking and Support Forces NATO, while simultaneously serving as the deputy commander of U.S. Naval Forces Europe and U.S. Naval Forces Africa. His previous command assignments include Carrier Strike Group 8/Eisenhower Carrier Strike Group, USS Gettysburg (CG 64) and USS Taylor (FFG 50).

Davidson is also a distinguished graduate of the U.S. Naval War College. He has a Master of Arts in National Security and Strategic Studies, and a Bachelor of Science in Physics.

His decorations include the Distinguished Service Medal, the Navy and Marine Corps Commendation Medal with Combat "V," a Superior Honor Award from the U.S. Department of State as well as other personal, service, unit and campaign awards.

The roster of speakers in this year's Economics Club lineup also includes:

Oct. 19, U.S. Rep. Scott Rigell and Maya MacGuineas, president of the Committee for a Responsible Federal Budget and head of the Campaign to Fix the Debt;

Nov. 16, Wade D. Pfau, professor of retirement income in the Program for Financial and Retirement Planning at The American College;

Feb. 8, Miki Agrawal, winner of the 2015 Social Entrepreneur of the Year award at the World Technology Awards for her company THINX;

March 15, the Economics Club's 10th Annual Economic Impact Award will be presented to the Norfolk Southern Corporation; and

All events are held at the Norfolk, Marriott Waterside.

The Economics Club of Hampton Roads is administered by Dean Jeff Tanner of Old Dominion's Strome College of Business, under the supervision of an elected board. For more information or to join, see the Economics Club website.