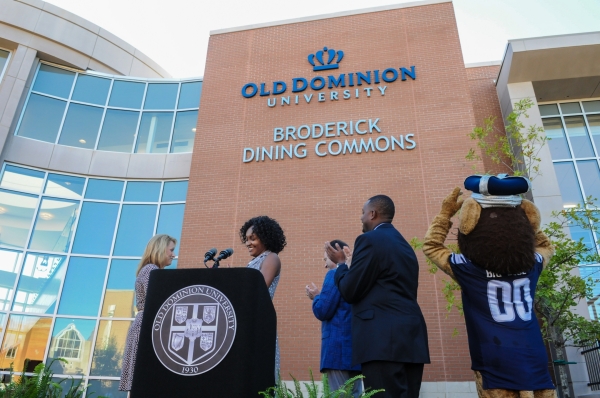 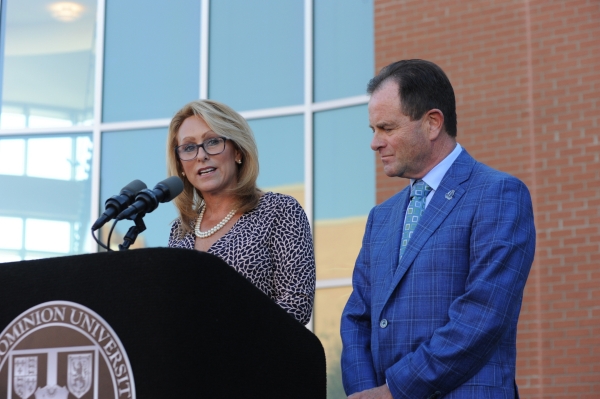 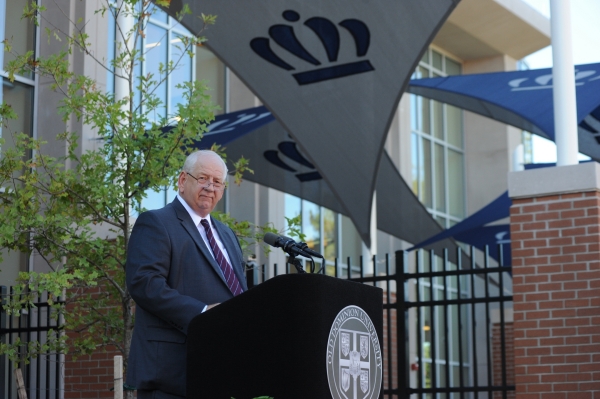 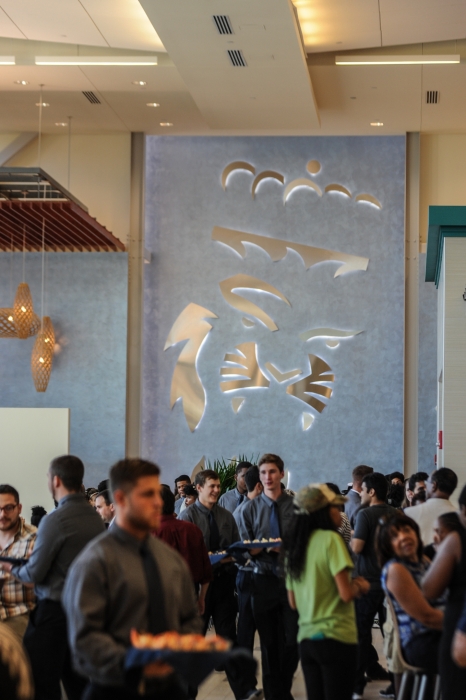 Inside the Kate and John R. Broderick Dining Commons

The Sept. 23 dedication of the Kate and John R. Broderick Dining Commons was attended by more than 1,500 students, staff, faculty and members of the community. Old Dominion's president said he hopes it becomes a gathering place where users seek to uphold the University's commitment to diversity and inclusiveness.

"Help me keep my promise that nobody on this campus ever feels alone or marginalized," President Broderick said. "Kate and I sincerely hope the dining facility is a setting to spend time to better know and understand each other."

President Broderick cited the highly publicized example of Florida State football player Travis Rudolph, who sat with lonely student Bo Paske, who has autism, during a visit to the boy's middle school. "Let's make efforts like that the norm in this building going forward," he said.

Former Old Dominion University Board of Visitors Rector Ronald Ripley ('72) told the crowd about being invited to a meeting with student leaders last winter where the idea was raised.

Ripley said the Board of Visitors was considering the same gesture, which was unprecedented for a sitting University administrator. But he wanted to hear the student leaders' rationale. One after another, they delivered heartfelt tributes to the President and First Lady.

"It's astounding what the University has done under his leadership," Ripley said. "John Broderick will go down as one of the best presidents in Old Dominion University history, and I submit, the best."

Ellen Neufeldt, vice president of Student Engagement and Enrollment Services, and the emcee of the dedication event, said the size of the crowd that gathered was a testament to the appreciation felt for the Brodericks by the University community.

Kate Broderick became emotional as she recalled being informed of the honor. "Your kindness will be something we carry in our heads for all of our lives," she said.

"As an international student coming to Old Dominion University, no one has made me feel more welcomed and supported than President Broderick and Kate Broderick," said Petra Szonyegi, the current student representative on the Board of Visitors.

Student Government Association President Rachael Edmonds and former two-term SGA President Christopher Ndiritu gave the final tribute to the Brodericks. Edmonds announced a new Old Dominion University tradition in which a commemorative coin will be dedicated annually. She said the inaugural coin will include an image of the Broderick Dining Commons.

The event also included a performance by the ODU Marching Monarchs and an appearance by Big Blue and the University's cheer and dance teams. Following the dedication, participants toured the building and sampled gourmet selections from the dining commons' culinary offerings.

The dining commons is designed to provide a restaurant-style environment featuring a diverse array of options while creating a strong sense of community.The main dining area will feature eight distinct options. They include:

Food preparation areas will include window views into the Noodle Room and Butcher Room. A separate service window in the Rotunda will provide convenient access to pastries, coffee and cappuccino without having to enter the restaurant area.

Additionally, the dining commons was constructed with sustainability in mind. It is LEED (Leadership in Energy and Environmental Design) Gold Certified and meets specified standards relating to efficiencies in building materials, energy consumption, water conservation and overall environmental impact.

Chief Operating Officer David F. Harnage said the dedication marked a "red-letter day" for the University. "I may be a little biased, but just look at this building. It's a beauty," he told the audience.