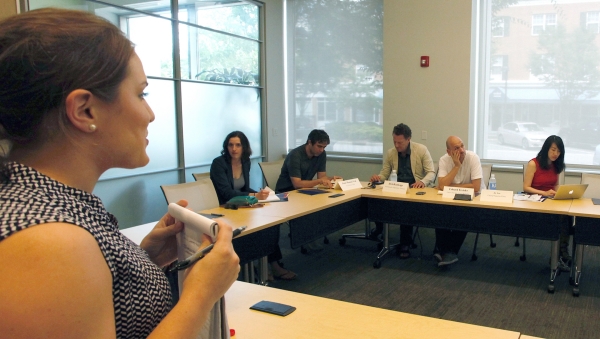 A delegation of foreign journalists, led by the U.S. State Department's Foreign Press Center, came to Old Dominion on July 6, where they received a presentation on the University's multidisciplinary sea level rise efforts.

The visit was part of a regular outreach campaign by the State Department to provide assistance and context for foreign reporters assigned to do stories about the United States.

To the journalists from China, Germany, Chile and the Czech Republic, Old Dominion researchers made presentations about the sea level rise and recurrent flooding research, education and outreach led by the University.

"We're kind of a natural test bed because we are so vulnerable to sea level rise and recurrent flooding here," Steinhilber told the journalists. "We know we're not alone, so we're always open to sharing research and best practices with other coastal areas, so we learn together."

Projects include the White House-sponsored Intergovernmental Pilot Project, which is tasked with creating a "whole of government, whole of community" approach to resilience planning; the Commonwealth Center for Recurrent Flooding Resiliency, which will be led by ODU, the Virginia Institute of Marine Science (VIMS) and the College of William & Mary; and the coordinating role the University played in winning $120 million for the region in the U.S. Department of Housing and Urban Development's National Disaster Resilience Competition.

The visiting journalists also heard a presentation from Larry Atkinson, the Slover Professor of Oceanography at Old Dominion, about the state of the science of sea level rise in Hampton Roads and in other coastal areas around the world.

Atkinson used charts and maps to demonstrate the small, but persistent increase in sea levels in the region over the past 100 years as recorded by tidal gauges. Atkinson spoke about how this region is also being affected by a combination of a slowing Gulf Stream piling up water on the U.S. East Coast, and gradually sinking land that is making the issue of sea level rise worse.

Wie Yusuf, associate professor in the School of Public Service, gave a social science perspective in her presentation.

Yusuf said issues like evacuation, traffic patterns, health resources and recovery from storm events include a large human component. This is important to study to help determine the region's best course of action in the years ahead, she said.

The U.S. State Department has Foreign Press Centers in Washington, D.C. and New York. The Foreign Press Centers support U.S. policies by helping foreign media cover the U.S. Their goal is to promote the depth, accuracy and balance of foreign reporting from the U.S., by providing direct access to authoritative American information sources.