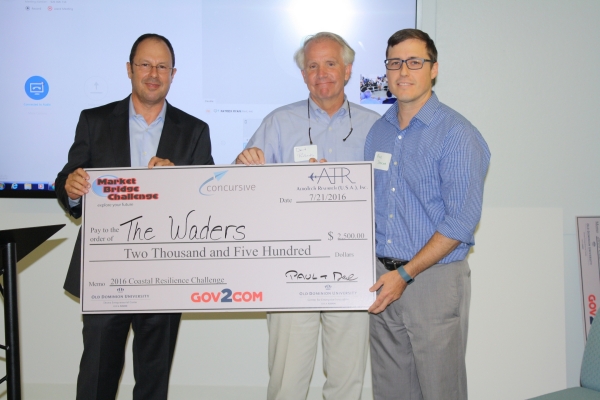 The Waders, a team of local government and academic workers, were awarded second place in the AeroTech-Concursive Sea Level Rise Challenge.

Three teams were recognized for their work to expand the capability of an existing Sea Level Rise App during the Market Bridge Challenge, a competition sponsored by the Old Dominion University Center for Enterprise Innovation's (CEI) grant program GOV2COM and the Strome Entrepreneurial Center.

After four months of hard work creating apps that will run with the Sea Level Rise App, which was developed originally by Norfolk-based environmental non-profit Wetlands Watch, the winning teams received cash prizes July 21 in an event at the Strome Center.

"It's a phenomenal thing that's happening at this University in innovation and entrepreneurship," said Old Dominion Chief Operating Officer David F. Harnage, in welcoming remarks. "My real message is thank you for being part of it."

The Sea Level Rise App allows users to map flooded areas in their neighborhoods using the GPS unit and camera on their iPhone or Android device. It first saw use in Hampton -Roads - which second only to New Orleans as the U.S. area most threatened by sea-level -rise - but can be used on any coastline throughout the world.

For the Market Bridge AeroTech-Concursive Sea Level Rise Challenge, teams were tasked with developing new software that can enhance the services offered by the Sea Level Rise App. Competition was fierce, with 11 teams submitting proposals, which were assessed by a panel of local sea level rise experts.

The winning team, Interactive Canes, which was comprised of a professor and 11 students from the University of Miami, received a $5,000 cash prize. Two second place prizes of $2,500 were awarded to local teams The Waders and The Ghent All Stars.

Elizabeth Dietzmann, director of GOV2COM, which runs the Market Bridge Challenge, said every team that entered the competition introduced innovations that could help the region's shared concern of mitigating and adapting to a future with higher sea levels.

Dietzmann said many of the teams were comprised of members from government, private and academic organizations, located in different Hampton Roads jurisdictions.

"I don't want to hear how we can't work together as a region," she said.

New Norfolk councilwoman Andria McClellan also spoke to the gathering. She said as a Norfolk city council member, and a resident of The Hague, "this issue matters to all of us, on a personal level."

McClellan said she was heartened with the strong degree of cooperation between area experts in entering and judging this competition, and that the winners of the competition show economic development can be a byproduct of finding sea level rise solutions. "I will promise to be your champion, to keep raising these issues," she said.

Two other events make up the Market Bridge Challenge. Winners of the Scavenger Hackathon Challenge, hosted by CPRCV.org and Trustifier, Inc.; and the Hillier (ignite) Broadband Challenge will be announced in the fall.

Interest in the Market Bridge Challenge spans the East Coast and even overseas. Besides the University of Miami, which provided three different submissions, teams are comprised of city employees, military personnel, government contractors and associates of a South African business.

GOV2COM is a series of interconnected programs created through CEI and designed to help government and military contractors better understand how to do business in the private sector. It was introduced to the Hampton Roads community last fall through funding received from the Commonwealth through the Department of Defense Office of Economic Adjustment, to offer help for companies and entrepreneurs that want to move their business beyond government contracts.

Formed at the University in 2014, CEI has built on decades of expertise fusing campus to community. By bringing programs such as the Hampton Roads Veterans Business Outreach Center, Women's Business Center and Technology Applications Center under one structure, CEI helps Old Dominion fulfill its long-standing mission to be a true economic engine.