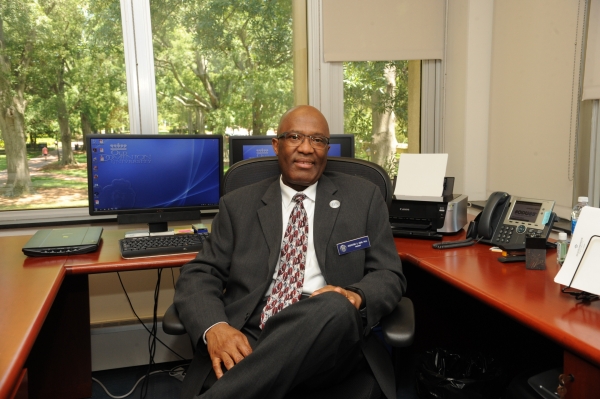 Augustine "Austin" O. Agho was not daunted by the challenge of moving from Indianapolis to Norfolk this summer to become Old Dominion University's provost and vice president for academic affairs.

Agho had moved across an ocean and through several climate zones from his native Nigeria to Anchorage, Alaska, to begin an academic journey that has taken him to six states over more than 35 years.

Agho assumed Old Dominion's top academic position on June 1, becoming the first African-American in the role at the University. Since arriving on campus, he has soaked up as many experiences as possible. But it was that first big leap of moving from Africa to Alaska that proved to him that anything was possible.

"I really didn't have any idea of the distance. I didn't know how far I was going," Agho said in a wide-ranging interview in his office in Koch Hall. "My first step was Minneapolis, and from Minneapolis I took a flight to Anchorage. And this flight just kept going. 'Am I going back to Nigeria?' I thought. It was an experience."

In fact, Agho said a taxi driver in the United States tried to convince him the decision to move so far north was unwise. "From his accent, I was sure he was from Jamaica or somewhere. He asked me where I was going. I said I'm going to Anchorage. This guy almost stopped his taxi and said, 'Have you lost your mind?'"

"Have you ever seen a moose?" Agho asked. "That's one amazing creature."

After earning his undergraduate degree, Agho did graduate work in Illinois and Iowa and then worked in academic positions in Illinois, Florida, Michigan and Indiana. He loved every step. His credo is: Don't be afraid to journey into the unknown.

As Old Dominion's new provost, Agho has been struck by how the concerns expressed to him by faculty members mirror those he heard in deanships at the University of Michigan-Flint and at Indiana University-Purdue University Indianapolis.

"It's always an issue of having adequate space. We want to be able to have the resources to hire faculty and retain faculty. You have adjunct faculty you depend on heavily. And we have a limited budget," Agho said.

The new provost maintains it's his job to "not" have all the answers.

"As a provost, you're actually in a very unique position in the academy, to set academic priorities for the campus," he said. "It is exciting to say that I don't know everything, I'm not an engineer, but I'll be working with engineers. My background is in health science administration, but in this position here, I'll get to work with scientists of all disciplines here on campus."

Old Dominion President John R. Broderick is delighted that a scholar and research leader with Agho's record of achievement is the University's new provost.

"In Dr. Agho's short time here, I have witnessed first-hand his commitment in areas of academic and research leadership as well as his keen interest in supporting students," Broderick said.

The first two months of his tenure have taken Agho from one end of campus to the other, meeting academic leaders in all of the colleges.

"I know in order for me to be successful as a provost, I need to have a good working relationship with department chairs. They are the ones who work hand in hand with our faculty," he said. "I want to make sure faculty have up-to-date information on all academic matters. I can't an effective advocate for academic affairs without having direct connections with faculty."

Agho has met many people at the University. But one face was familiar on campus: Johnny Young, associate vice president of student engagement and enrollment services, was a colleague of Agho's at the University of Michigan-Flint.

"It was great. When you apply for a job, you're going in without any idea of who the key players are. Having someone like Johnny Young - I think I called him before I even applied," Agho said. "He has nothing but good things to say about Old Dominion. Everything he told me about this place has proven to be true and helpful."

Young is delighted to be reunited with his friend and colleague.

"Our sons played in a middle school basketball league together, and our emphasis on family, appreciation for the work we do and integrity are among our common bonds. He is a good man for whom I have the utmost respect," Young said.

Agho is married with three adult children. He is excited to continue learning about his new home, particularly the history embedded in southeastern Virginia. He feels he's been shaped by every life experience, including coming across the ocean to study in a foreign, freezing land.

Agho would love to be an inspiration or a role model to other foreign scholars considering higher education in the United States and Old Dominion, in particular.

"I would hope that when students learn about my background, they will be encouraged to think of many possibilities. Not just here in the U.S. but just about anywhere in the world."