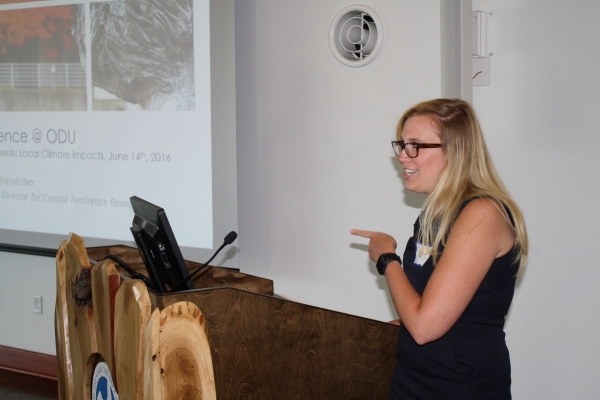 Presented by the Virginia Conservation Network, "Local Climate Impacts" featured presentations by Steinhilber; Carl Hershner, associate professor of marine science with the Virginia Institute of Marine Science (VIMS); and Joe Bouchard, a retired U.S. Navy captain and a local consultant who has worked on sea level rise-related issues for many years.

Steinhilber outlined the multi-agency projects that Old Dominion has participated in since President John R. Broderick created the Climate Change and Sea Level Rise Initiative in 2010.

"At ODU, we like to see ourselves as non-partisan brokers of expertise, and members of the community," Steinhilber said, noting that the Old Dominion campus itself is bordered on two sides by water.

Among the projects that Steinhilber described to the Brock Environmental Center audience was the innovative Hampton Roads Sea Level Rise Intergovernmental Planning Pilot Project, a White House-created project tasked with creating a "whole of government, whole of community" approach to resilience planning. Hershner and Bouchard also play leadership roles in the two-year Intergovernmental Pilot Project, which will present its findings to the community later this year.

In addition, Steinhilber spoke about the new Commonwealth Center for Recurrent Flooding Resiliency, which will be founded this summer and led by ODU, VIMS and the College of William & Mary, and the coordinating role the University played in winning a $120 million federal grant for the region in the U.S. Department of Housing and Urban Development's National Disaster Resilience Competition.

"Hampton Roads has a good start on this important work. We're not perfect by any means, so it's important for us to work collaboratively," Steinhilber said.

In introducing the forum, a letter from Sen. Tim Kaine was read by his regional director Diane Kaufman. Reading Kaine's words to the panelists, Kaufman said: "I wish to thank you for your advocacy in protecting our natural resources. Sea level rise poses threats to economic vitality, daily life and national security. Together, we can all do our part to rise to this tough challenge."

Hershner, who in addition to researching issues of sea level rise and recurrent flooding for decades in Hampton Roads, is co-chair of the Intergovernmental Pilot Project's science working group with Old Dominion's Larry Atkinson, Slover Professor of Oceanography.

Hershner took the audience through different scenarios for what will Hampton Roads will face by the year 2100 in climate and sea level rise projections. He explained how the region faces three unified threats of rising sea levels, sinking landmass in southeastern Virginia, and a slowing Gulf Stream, which pushes more water up against the East Coast. "Now we know the problem, what do we do about it?" Hershner said.

Bouchard, a local strategic planning consultant and stakeholder in the Intergovernmental Pilot Project, said many groups are working on solutions to the vexing problem.

"The term recurrent flooding is not sufficient to understand what's happening," Bouchard said. "It constrains our thinking about what's happening to us. The problem is much bigger."

For the Coastal Virginia region, he added, the key is acting with one voice, cutting through various levels of government, seeking support from nonprofits and everyday citizens. "Working together is our best hope at finding our best solution," Bouchard said.