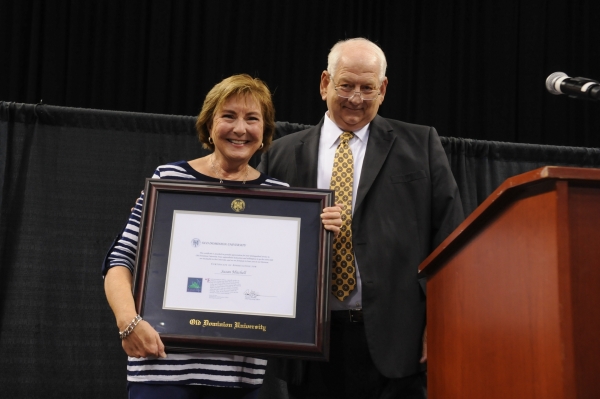 The award recognizes an employee, nominated by their peers, who exhibits consistent excellence in their job performance. The University has surprised an employee with the Gazelle Award every year since its inception in 1996.

As the winner, Mitchell receives $1,000 and a framed certificate.

"Sue is clearly an outstanding professional, mentor, teacher and colleague, but I believe she should be viewed first as a leader who maintains a high level of integrity and will do the right thing in all situations," wrote Shannon Sauerwald, general administration manager in Webb Center Operations, in nominating Mitchell for the Gazelle Award. "She serves the people she leads - including employees, students, customers and community - as priority number one. She is the first to volunteer to help, never too proud to do the work, even the difficult or unpopular jobs, in order for our team to succeed."

While she has served various roles at the University over the past 25 years, Mitchell has spent the majority of her career at Webb Center. In 2012, she was one of seven university officials nationwide who collaborated on a book about the student union idea, tracing its history from the prototype concept at the University of Wisconsin.

Mitchell was among 12 Gazelle Award nominees that also included: