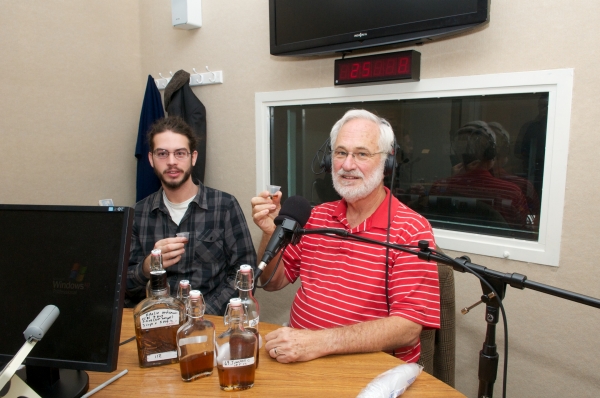 Lytton Musselman (right) and Peter Schafran appeared on an episode of 'With Good Reason" three years ago, sampling spirits made from wild plants.

The show's reach extends farther than ever.

Produced by the Virginia Foundation for the Humanities in Charlottesville since its inception, "With Good Reason" was added to the broadcast schedules of 25 public radio stations across the country in the past 12 months. A total of 68 stations now carry the show, which can be heard in 30 states and the District of Columbia.

In addition, 276 individual programs were ordered and aired by other stations, including some of the largest public radio stations in the United States.

"It has been an incredible year for the program, and that's thanks to the incredible work that continues to be done at Virginia's public universities," said Sarah McConnell, host of "With Good Reason."

In the past 12 months, Old Dominion faculty members such as Avi Santo, associate professor of communication and theatre arts; Ray Toll, director of coastal resilience research; Gail Dodge, professor of physics, and Imtiaz Habib, professor of English, have been interviewed by McConnell.

Santo discussed the groundbreaking "Birth of an Answer" multimedia product, produced as a response to the 100th anniversary of the controversial film "Birth of a Nation." Toll spoke about the Intergovernmental Pilot Project convened at Old Dominion to create a "whole of government, whole of community" approach to deal with the issues of sea level rise and recurrent flooding.

Dodge was interviewed about her efforts to attract more female students to study sciences like physics and engineering. And Habib discussed "Shakespeare 400 Years After," an ambitious collaborative project three years in the making at Old Dominion to focus attention on the enduring impact of William Shakespeare's life, work and times.

"With Good Reason" was created in the early 1990s by three Virginia university administrators and the State Council of Higher Education for Virginia.

Old Dominion President John R. Broderick was one of the show's founders. Then serving as the University's director of public relations, Broderick said higher education in the Commonwealth was struggling in a time of shrinking budgets.

"With Good Reason" was conceived as a novel way to showcase the dynamic research being conducted at Virginia's public universities, he said. At first, the idea, which wasn't being done anywhere else in the country, was viewed skeptically.

"I remember when we had an Old Dominion physics professor in President James Koch's residence, going around and opening up the fridge and turning on lights, explaining how physics works in our everyday lives," Broderick said. "It was really engaging radio, and I remember thinking we're onto something here. I'm very happy that 'With Good Reason' continues to be a vibrant program, being aired on more stations nationwide than ever."

This season, Old Dominion researchers are scheduled to speak about pollinating bees, sports referees and the indelible memories our musical heroes create for fans.

For more information about the show, including a list of the public radio stations where the program airs, see the "With Good Reason" website.