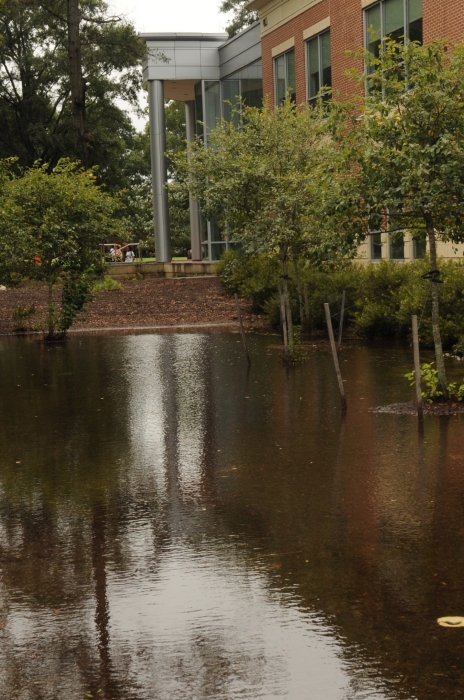 Flooding on the Old Dominion campus

Legislative assistants for 10 members of the U.S. House of Representatives learned about Old Dominion University's breadth of multidisciplinary research and outreach on sea level rise and recurrent flooding during a visit to the University on May 3.

In seven presentations to the traveling delegation of legislative assistants of the Congressional Climate Solutions Caucus, who also visited Naval Station Norfolk, Old Dominion researchers described projects ranging from vulnerability forecasting to traffic behavior to the measurement by satellite of how southeastern Virginia is gradually sinking.

In addition, the aides heard about the University's key coordinating role for sea level rise and flooding mitigation and adaptation, including the innovative White House Intergovernmental Pilot Project and the new Commonwealth Center for Recurrent Flooding Resiliency, recently approved by Gov. Terry McAuliffe and the General Assembly.

Leading off the presentations, Paul Olsen, the University's director of federal, commonwealth and municipal programs and partnerships, told the visiting delegation about U.S. Secretary of State John Kerry's fall address at Old Dominion.

"He said every university across the country needs to be doing what ODU is doing" about the threat of damage from phenomena as diverse as Hurricane Katrina and catastrophic drought-like conditions in other parts of the country. "There need to be more innovative options," Olsen said.

They include the Pilot Project, which is tasked with creating a "whole of government, whole of community" approach to resilience planning; the Commonwealth Center for Recurrent Flooding Resiliency, which will be led by ODU, the Virginia Institute of Marine Science and the College of William & Mary, and the coordinating role the University played in winning $120 million for the region in the U.S. Department of Housing and Urban Development's National Disaster Resilience Competition.

Michelle Covi, assistant professor of practice with the Old Dominion University Office of Research and Virginia Sea Grant Climate Adaptation and Resilience Program, described how community forums for sea level rise and flooding Old Dominion has led since 2012 have facilitated conversations with a broad range of stakeholders.

"We understand that the federal government isn't going to fund all of these resilience projects. We need to bring everyone into the fold," Covi said.

The Old Dominion researchers who made presentations included Carol Considine, associate professor of engineering technology, who discussed the case study being conducted in the Pretty Lake region of South Hampton Roads as part of the Pilot Project.

"The region needs to stop looking at sea level rise based on municipal boundaries and start looking at it through ecological boundaries," Considine said. "The collaboration across organizations has given us the most benefit and gives us the most success."

Yusuf said a dynamic issue such as urban planning in an area susceptible to flooding underlines the importance of collaborative research. "It's not a problem that government alone can solve. It's a problem that requires this collaborative effort. Multi-sector partnerships is one of our key areas of expertise," Yusuf said.

Ben Hamlington, assistant professor of ocean, earth and atmospheric sciences, showed the visiting delegation satellite mapping that demonstrates how sea level rise is exacerbated locally by the gradual sinking, or subsidence, of land in southeastern Virginia.

"This is an important part of what we're doing. If we don't know what this land is doing, it makes the information about sea level rise projections less accurate," Hamlington said.

In the final presentation, Joshua Behr, research associate professor at ODU's Virginia Modeling, Analysis and Simulation Center, gave visitors a sense of the stakes for Hampton Roads. Presenting census and survey data to show which parts are most economically vulnerable, along with historic flood modeling from previous storms, Behr demonstrated how much, and for how long, the region could be affected by a catastrophic storm.

The presentation concluded with a short video of Kerry's address at Old Dominion last fall. Kerry outlined how Old Dominion's collaborative work can serve as a model for other regions trying to tackle the vexing problems of climate change, sea level rise and recurrent flooding.

Olsen ended on an encouraging note. "What Emily and our team have just showed you is you don't have to do it alone."