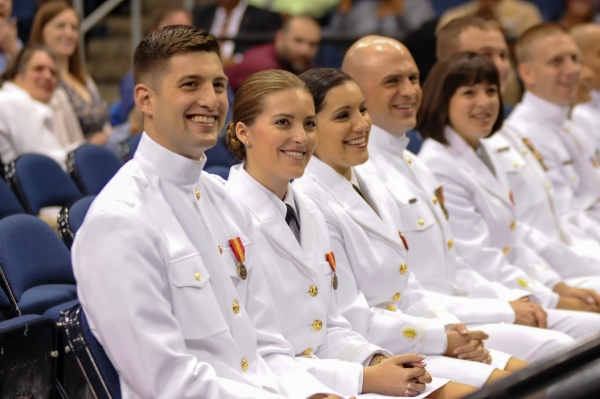 A pelting rain outside couldn't dampen the spirit inside Old Dominion University's Ted Constant Convocation Center as a new batch of ROTC officers was commissioned and made their first salute on May 6.

The annual joint ceremony for the Old Dominion University Army ROTC and Naval ROTC Unit Hampton Roads creates officers, who are then posted to U.S. military installations around the world.

Rear Adm. Richard Berkey, director, fleet maintenance with U.S. Fleet Forces Command, delivered the commissioning address to the 43 officer candidates, telling them they and their families and friends should be proud of their commitment to serve their country. "I look out and I see the families, and the pride swelling in their chests," Berkey said.

The ceremony included members of the Old Dominion University Army ROTC and the Naval ROTC Unit Hampton Roads, which has students from Hampton, Norfolk State and Regent universities.

"This is probably the most meaningful thing that any of us will do all year," Broderick said. "We offer our deepest gratitude for your courage and your selflessness. In my mind, there is no greater sacrifice than this."

Berkey, a native of Windber, Pa., entered the Navy through Penn State's NROTC program, earning a bachelor's degree in civil engineering. He told soon-to-be commissioned officers at Old Dominion that his commissioning and university graduation were on the same day.

"The commissioning, this event, was the main event for me," Berkey said. "It is a calling, a sacred honor, and one that will serve you well tomorrow and 20 years from now. You well never regret making this commitment."

Berkey was introduced by Capt. Daniel S. Cave of the Naval ROTC Unit Hampton Roads. Cave told officer candidates that their bravery in seeking to be U.S. military officers is laudable.

Lt. Col. Mark D. Rea of the Old Dominion Army ROTC welcomed attendees to the ceremony and spoke directly about his cadets. "I'm honored and humbled to have served as their professor of military science. I'm truly convinced they are ready to become our next generation of leaders in our modern military," he said.

Rea also paid tribute to Linda Baker, who has served as executive secretary for the Old Dominion Army ROTC for 36 years.

Army ROTC was established at Old Dominion University in September 1969 as part of the Darden School of Education. Since its inception, the program has grown in size and scope, with the establishment in the 1974-75 school year of a military science curriculum that is fully recognized academically by the University. That milestone was followed in 2003 by the Faculty Senate's approval of an academic minor in military leadership studies.

Naval ROTC Unit Hampton Roads was commissioned in July 1982 and developed an innovative concept known as the "NROTC Consortium." With this concept, NROTC Hampton Roads became the first unit to offer complete programs at three institutions, Hampton, Norfolk State and Old Dominion. Since its establishment, the program has grown to include Regent University and Tidewater Community College.