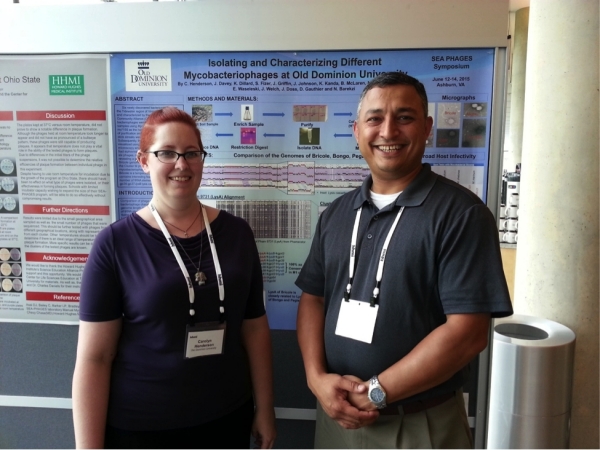 Old Dominion University microbiologist Nazir Barekzi's students, the "phage hunters," are on the trail of something big.

Students from his phage discovery and genomics class have discovered "HedwigODU," a new bacteriophage - a virus that destroys bacteria - in campus soil. It could have potential therapeutic use against drug-resistant bacteria, such as tuberculosis.

"Antibiotic-resistant bacteria is a very confounding problem facing us now," Barekzi said. "Most Mycobacterium species are actually highly antibiotic-resistant. We've reached the last line of defense in using antibiotics against some of these organisms."

Testing of the "HedwigODU phage," named by students Delilah Hahn and Joanna Camacho for Harry Potter's owl Hedwig, has been effective on the bacteria Mycobacterium smegmatis. That is a model organism for study because its genomic structure closely approximates that of the dangerous bacteria that causes tuberculosis, Barekzi said.

HedwigODU was studied by Carolyn Henderson, one of Barekzi's first phage hunters, and has been shown to have some broad host range activity by infecting different species of Mycobacterium. That suggests this new virus can be studied as a novel phage therapeutic in medical research against Mycobacterium species.

"These conclusions are based on preliminary data, but worth investigation," Barekzi said.

Phages are abundant in soil, said Barekzi, who noted the HedwigODU phage was found next to the pond near the Oceanography & Physics Building.

The genome of HedwigODU was sequenced as part of Barekzi's class on phage discovery and genomics. His students also are collaborating with Old Dominion marine scientist David Gauthier to study the phage's effectiveness on Mycobacterium species that infect striped bass.

Barekzi, winner of the College of Sciences Distinguished Teaching Award, said, "We're trying to see if there's a potential link between the samples we can isolate and find some phage that can kill organisms that are dangerous to fish as well as humans."

"The field of phage therapy is becoming revitalized and has the potential to impact human therapeutics, food safety, environmental sanitation and veterinary applications," he continued. "That's why it's so interesting to me and my students."