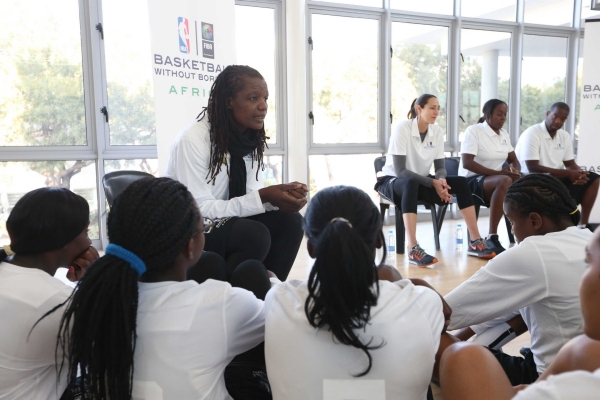 Clarisse Machanguana, a former star basketball player for Old Dominion University's Lady Monarchs, has been named UNICEF ambassador for Mozambique, in recognition of her work to help disadvantaged children in her native country.

"Clarisse Machanguana has been showing high commitment to child rights, with a particular focus on adolescents and girls empowerment," UNICEF said in a statement announcing her appointment. "She has also developed her own awareness raising and life skills initiatives with young people mobilizing a range of stakeholders, partners from Government, donors to development partners, and proactively approached UNICEF for collaboration. She is a respected personality for her integrity, reputation and high networking skills among development partners, line ministries and key influencers in Mozambique."

At the dedication ceremony earlier this month, Jorge Ferrao, Mozambique's minister of education and human development, described Machanguana as a symbol of inspiration for young people. "Clarisse was not afraid to sacrifice the present for the future," Ferrao said, noting that the announcement also serves as badly needed good news for the challenged African nation.

Machanguana thanked UNICEF for the recognition. "I hope to contribute in disseminating knowledge to help children and adolescents to live a healthier life, and be better prepared to face the adversities of a developing country," she said.

Fluent in four languages, Machanguana recently published her first book, which seeks to motivate young people to pursue their dreams through sports, health and education.

She also began a three-month trek across Mozambique this spring, walking 50 kilometers a day, to bring awareness to the HIV epidemic in the country. In an article in the Players' Tribune website last December, Machanguana outlined her plans to walk the length of the country to raise awareness for testing for HIV, which infects 17,000 adolescents every year.

"Truth be told, in Mozambique, people just didn't talk about it at all," Machanguana wrote in the online piece. "They still don't talk about it. If somebody dies - even if everybody knows they had HIV - they never say it. You never hear on the TV or read in the newspaper that someone "died of HIV." It's always a "long disease," or "they were very ill." As for sex education? Forget about it. You're lucky if your mother was open enough to talk about it. It's almost like living in a bubble, and if you're not reading beyond what's reported here, then you just don't know about it. It's almost like it's a disease outside of our world."

To read Machanguana's piece in the Players Tribune, see HERE.

Machanguana was part of the "Portuguese Connection," along with former All-American Ticha Penicheiro, powering Wendy Larry's Old Dominion teams. Old Dominion retired Machanguana's jersey in 2000. She scored 1,813 points during her career, which is ninth on the Lady Monarchs all-time scoring list.