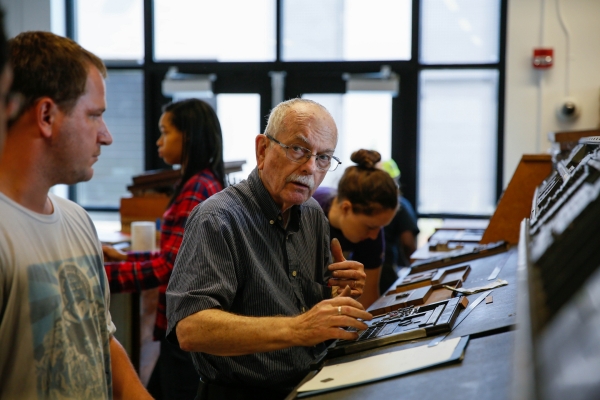 Ken Daley, who taught art at Old Dominion since 1965, recently retired with the honor of being the University's longest-serving faculty member, with 51 years in the classroom.

"My heart and soul are here," said Daley, 74, who pioneered classes in screenprinting and letterpress printing at ODU. "My experience as an artist and educator has been more like a calling than a job."

How has life at Old Dominion changed in the past half-century? When he started, Daley used to know at least half of the faculty, across departments. Now it's no more than 5 percent.

As for the students, today's bunch is less mechanically inclined.

"They don't know how to use hand tools - a hammer, a screwdriver. I now have to teach these things." On the other hand, "I learn the digital applications from them," such as WhatsApp, an instant messaging app.

Daley and his students used a Vandercook printing press that he bought for the department in 1965. That doesn't mean he hasn't kept pace with the technological revolution. "Ironically," he said, "I now use and teach digital methods to prepare analog, hand-crafted products," such as books.

When deBeixedon became chairwoman, "I went through the files and found note after note from him - proposals for a gallery, for an arts center, for a scholarship. We have what we have because he had one single-minded objective: building the art department. This is what he loves."

Daley led an early push for studio space. One of the first locations, he recalled, was in empty space under Foreman Field, where he had to clear out "old rotten tumbling mats" - and worse.

His final residence was in the Hixon Art Studio, which opened last fall in the University Village. The building, he said, provides better light and "more fluid space" than he's ever had - and one of the best metalsmith shops on the East Coast.

All in all, he said, "it's been a very good experience here."