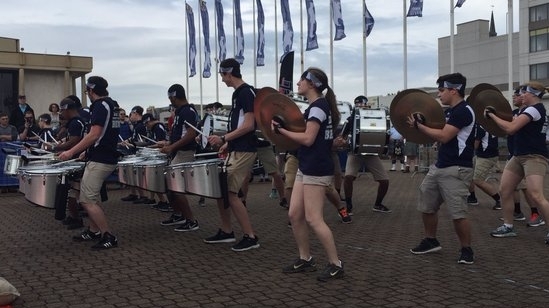 The ODU Drumline outperformed the Top Secret drum corps in a head-to-head exhibition.

The Monarchs' pounding rhythms and creative choreography propelled them to an upset victory over the internationally acclaimed Swiss drum corps Top Secret at the recent Drumline Battle.

The competition was held April 23 in conjunction with the Virginia International Tattoo.

In the end, the 21-student-strong Monarch Drumline captured the showdown, and the squads shook hands in the spirit of the annual NATO festival.

The Monarchs performed in the tattoo for the second consecutive year, but made their debut in the drumline battle. The victory culminated months of anticipation that began when the coordinator of the drumline battle asked Walker to take on Top Secret.

Walker's reaction: "Oh gosh." But when he brought the request to his group, the answer was unanimous. "They said absolutely."

It meant practicing as a unit after the usual marching band practice, as well as rehearsing in the offseason. But Walker said he felt optimistic. The marching band had recently returned from performing in Ireland for St. Patrick's Day celebrations, and the line was sharp.

"We have to have all of our music memorized, and we have to sound like one drummer," Walker said. "It takes hours beyond what we do in band rehearsal, but they were primed and ready to go. They were still cranking from the Ireland trip."

After outperforming Top Secret, the Monarchs moved on to the final battle against the Quantico Marine Band Drumline. They exchanged crowd-pleasing performances, but the Marines took the top prize.

Video of the drumline battle can be seen here.