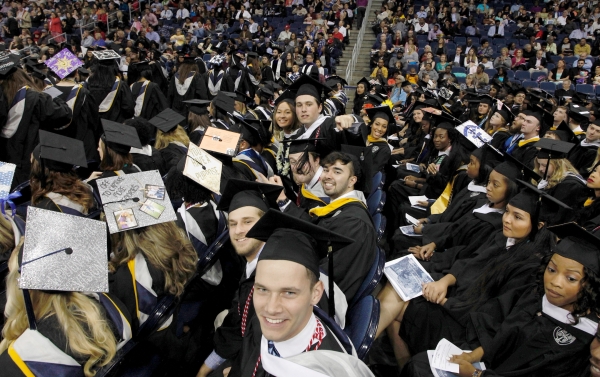 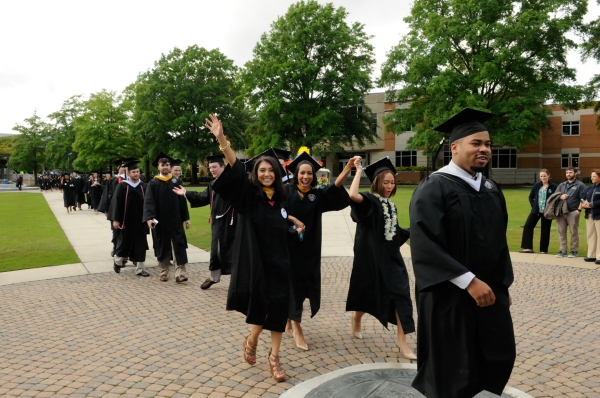 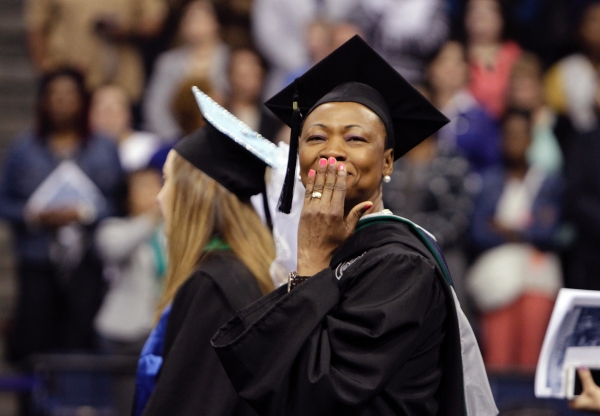 More than 3,100 degrees were conferred during spring commencement exercises.

By Brendan O'Hallarn and Tom Robinson

Old Dominion University has become a powerhouse in Hampton Roads and beyond, generating economic impact, innovation, entrepreneurship and engaged citizens.

And the ranks of Old Dominion's hugely successful alumni just grew by a record amount. More than 3,100 doctoral, master's and bachelor's degrees were conferred during three ceremonies May 6 and 7 at the University's Ted Constant Convocation Center.

On Friday afternoon, Wittman, a Ph.D. first elected to the U.S. House of Representatives in 2007, urged graduates from the College of Arts and Letters to be bold in their decisions, modest in their demeanor and generous with their service to others.

"Elevate yourself through purpose and passion, not through arrogance," Wittman said. "In your professional and personal lives you will often find yourself choosing between comfort and opportunity. Choose opportunity. Take the leap. When you find your will tested, your perseverance and persistence will carry you through."

Wittman, a gubernatorial candidate, was re-elected for to his fourth full term in the House of Representatives in November 2014. Previously, Wittman served for more than 20 years, in several levels of government, from Montross Town Council to the Virginia General Assembly.

In Congress, Wittman serves on the House Armed Services Committee and the Committee on Natural Resources. He has earned a reputation as an advocate for our military service members and a champion of the Chesapeake Bay. Before his election to Congress, Wittman spent 26 years working in state government, most recently as field director for the Virginia Health Department's Division of Shellfish Sanitation.

Blue, who joined Dominion Virginia Power in 2005 as managing director for state affairs and corporate public policy, spoke Saturday morning to graduates of the College of Health Sciences, College of Sciences and Frank Batten College of Engineering and Technology.

He demonstrated that he had done a little homework on Old Dominion's rivals, mentioning that although he didn't go to Old Dominion, attending the University of Virginia instead, "We were all wise enough not to go to Virginia Tech or VCU."

Blue also made a light-hearted mention of Old Dominion traditions of not crossing the University seal until graduation, and the high-spirited "Ice Cream and Cake" dance, before transitioning to a more earnest message about the power of shared knowledge and collaboration.

"What I want to focus on is a resource - the most precious resource you will ever have at your disposal - something with the power to improve our collective well-being, protect Mother Earth and help us understand the universe in which we live," Blue said.

"The resource I'm talking about is brainpower and its product - the total sum of human knowledge.. I'm talking about the extraordinary world of ideas and mankind's unique ability to innovate, renew and create value collaboratively."

Blue also highlighted the collaboration between Old Dominion University and Dominion Power to build the company's first rooftop solar energy installation, on top of the ODU Student Recreation Center, as a modest example of the power of collaboration.

At the Saturday morning ceremony, an honorary doctorate of humane letters was bestowed upon Marc Jacobson, retired judge of the Norfolk Circuit Court and former rector of Old Dominion University's Board of Visitors.

In the afternoon ceremony, Roché told graduates of the Strome College of Business and Darden College of Education that their most important job after graduation is to "discover and bring forth the gifts that are inside of us."

Roché, a motivational speaker who wrote the business memoir "The Empress Has No Clothes: Conquering Self-Doubt to Embrace Success," chose a nontraditional career as a minority woman in the corporate world. She said only when she gave "full voice to what was in my heart" did she realize she was exactly the right person to achieve what she has in her life.

"Now, more than ever, our world needs people who have energy, spirit and vision; people who are committed to making a difference," she said. "Too many of us keep our gifts hidden in the fear they won't be accepted or acceptable."

As a trailblazer in the corporate world for 25 years, Roché mentored women by encouraging them to find their voices and take bold career risks. Her vision for empowered businesswomen carried over into her work on behalf of girls in 2000, when she assumed the role of president and CEO of Girls Inc.

Roché received an honorary doctorate of humane letters in the ceremony.