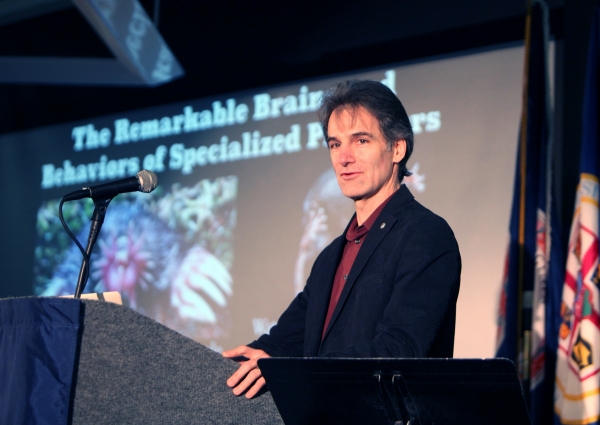 Neurobiologist Ken Catania discussed electric eels and other unusual predators during his presentation at Webb Center.

The stunning capacity of electric eels to locate and paralyze prey with pulses of different voltages was on dramatic display during Tuesday's Lytton J. Musselman Natural History Lecture at Old Dominion University.

In his presentation, "The Remarkable Brains and Behaviors of Unique Predators," acclaimed neurobiologist Ken Catania of Vanderbilt University discussed the activities of such unusual species as the star-nosed mole, water shrew and tentacled snake, using video and magnified photography.

Catania then spent a substantial final portion of his lecture detailing his cutting-edge study of eels that emit incapacitating 600-volt pulses, similar to those of a Taser.

By adding color to those pulses and amplifying them through electrodes, Catania showed stunning, super-slow-motion footage of eels finding and freezing the muscles of their prey.

At low voltage, the eels' searching pulses, designed to trigger involuntary movement of small fish and other prey, sounded like controlled sonar pops. But as the eels then swiftly attacked with higher-voltage pulses, startling rapid-fire bursts filled the North Cafeteria at Webb Center.

Catania also described the eel's positive and negative poles - their head and their tail, respectively - and how they intensify their electrical output by curling around their exhausted prey.

"My view of this animal's behavior was primitive, that they had one trick up their sleeve, an electrical club they use to shock you and defend themselves," said Catania, who has received MacArthur and Guggenheim fellowships. "But you see they are fairly sophisticated after all."

Catania's lecture was part of the ODU Presents series of multidisciplinary speakers that supports the University's research initiatives and community outreach efforts.

The Musselman Natural History Lecture is a continuing series led by Lytton Musselman, the Mary Payne Hogan professor of botany at ODU.

The series was launched with the help of a substantial gift from ODU alumni Michael and Sue Pitchford. A former student of Musselman's, Michael Pitchford is president and chief executive officer of Community Preservation and Development Corp. in Washington D.C.