Irish Eyes Set to Smile on Marching Monarchs in Dublin 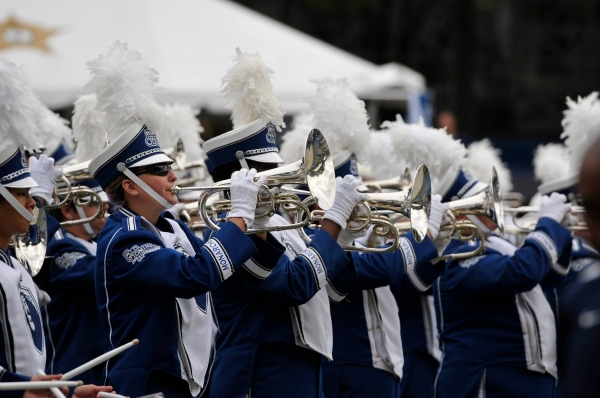 The Monarch Marching Band will be one of four U.S. college bands to play in Dublin's St. Patrick's Day Festival Parade.

For Alex Treviño, the logistical weight of moving 140 Old Dominion University musicians across the Atlantic for St. Patrick's Day will be lifted by the glow of hundreds of thousands of Irish eyes.

The Monarch Marching Band is one of four American college bands invited to participate in Dublin's 2016 St. Patrick's Festival Parade, a highlight of the annual four-day celebration in Ireland's capital city.

"This is a monumental event for our program and for the University," said Treviño, ODU's director of athletic bands.

The first challenge is to get to the 1 ½-mile city parade route expected to be lined by a half-million people. The band will travel in three units on Monday, March 14. All will bus to Washington, D.C. before diverting to three different flights - one direct to Dublin, two others to Dublin by way of Boston.

In Ireland, the band will play at the official festival reception March 16, and then march in the next day's parade with 13 other bands from the U.S., Ireland and Great Britain.

A live online stream of the parade starting at 8 a.m. Eastern on Thursday can be seen here.

ODU also will play in the International Band Championship in Limerick on Sunday, March 20 before heading home.

Treviño said the more his 8-year-old band plays in such gala events, especially overseas, the closer it gets to its high-profile goals.

"Everyone always asks when is the band going to march in the Macy's Thanksgiving Day Parade?" Treviño said. "I'd love to march in the Macy's parade, but it's not as simple as just saying I want to march in it. It's very, very competitive. And we're such a young group that we don't have a deep enough resume yet. But a trip like this for such an event shows you know what you're doing, that you won't be a train wreck on a day that's going to be stressful as it is."

It helps that the Marching Monarchs will be playing familiar tunes on the foreign turf. Treviño asked the organizers for suggestions of Irish music to play, but they countered, "We know our music. We really want to hear your music.''

That means such band standbys as the "ODU March Alma Mater" and "Victory for Old Dominion," said Treviño, who noted the Dublin parade will be a constant march. In Limerick, there will be a review stand where the band will stop and play.

ODU applied to play in this year's parade, the 100th anniversary of seminal events that led to the founding of the Irish Republic. Treviño and Dennis Zeisler, ODU's director of bands, attended last year's St. Patrick's Day Festival Parade for a site visit and while there received their official invitation from Christy Burke, lord mayor of Dublin.

"I'm from San Antonio, where they have Fiesta Week every year, a celebration of the city and the culture, and everybody is just really excited to show their pride," Treviño said. "That's exactly what I felt even before the St. Patrick's Festival Parade started, looking at the people lining the streets, everybody wearing green, decorated with hats and necklaces and just ready to be excited and entertained."

The Monarch Marching Band was founded by Treviño in 2008 ahead of the return of football to ODU in '09. It performs regularly at football and basketball games and also supports other athletic teams on a limited basis. The band also performs at numerous festivals, and was awarded "Best Marching Band" in 2013 and '14 for the Grand Illumination Parade in downtown Norfolk.