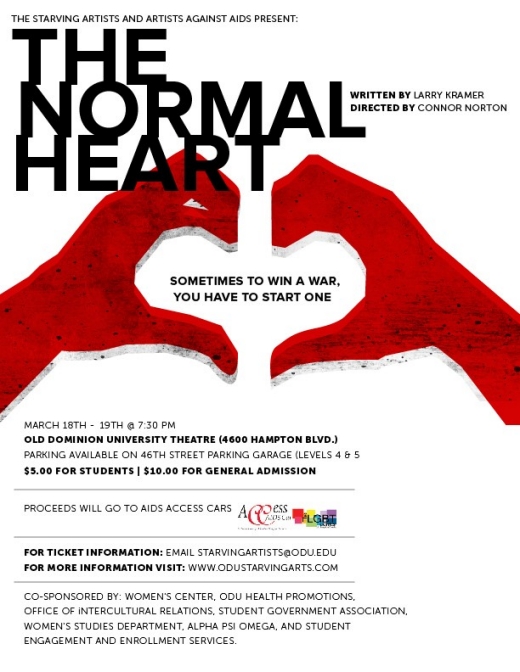 The Starving Artists (TSA), a student theatre production company at Old Dominion University, presents The Artists Against AIDS Campaign, a week-long series of events held March 15-19 to raise awareness of the social stigma associated with the HIV virus.

The campaign will kick-off Tuesday, March 15 in the front lobby of Webb University Center at 12:30 p.m. The campaign continues Thursday, March 17 with the lecture "HIV (Neutral) Neutralizing the Stigma of HIV/AIDS" with Gina Brown, a representative from the White House Advisory Board on HIV/AIDS. The lecture, hosted by The Office of Intercultural Relations and Safe Space Committee, will address the ways in which those seeking HIV/AIDS services are affected, and how we as a society can improve education and access to services by addressing the stigma head on.

The campaign concludes on Friday and Saturday March 18 and 19 with a production of "The Normal Heart" written by Larry Kramer and directed by ODU Theatre student Connor Norton. The production discusses the lack of attention and aid given toward HIV/AIDS services in the 1980's, a time when the virus was thought to only affect African-American men and women or gay men as it began to appear in the U.S. The performance will be accompanied by a presentation of "Blood Flag" an art piece by critically-acclaimed New York artist Jordan Eagles.

The art piece will accompany HIV/AIDS testing sites hosted by Access AIDS Care on March 16 and 17. Students who are tested will have the option to contribute their blood to this piece to speak in solidarity against the Food and Drug Administration ban on blood donations by gay people. This event is made possible by the support of ODU Health Promotions.

For information on Artists Against AIDS, and campaign-related events, visit www.odustarvingarts.com.