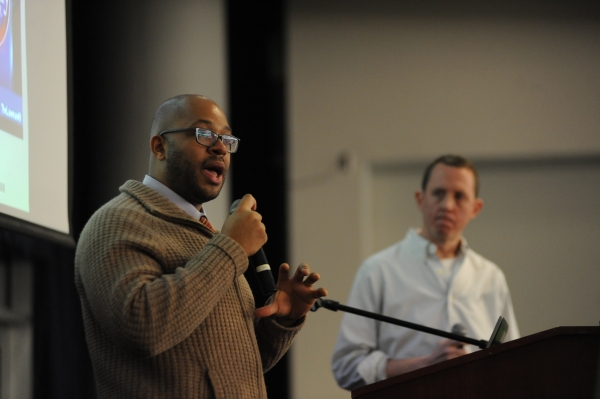 They co-authored a book about President Barack Obama's connection to hip-hop music. But Wednesday night at Old Dominion University was the first time they appeared together to speak about it.

The address was the keynote event for Black History Month celebrations at Old Dominion University. Gosa said the "timing was right" to discuss these issues in a cultural context, as President Obama nears the end of his final term in office.

"We're in a moment when we're trying to make sense of the last eight years of the Obama presidency," he said.

Nielson added that the energy that Obama tapped into during his run for the presidency in 2007 and 2008 through his hip-hop connection was nothing new. "These are all issues that hip-hop has spoken to for decades now. We see it as an important vehicle for political change."

Obama took a risk by embracing hip-hop early in his campaign, Gosa said. Other candidates had attempted to score political points by distancing themselves from the musical genre. When hip-hop artists felt his embrace, they returned the love through their words and music. The result was that many hip-hop artists promoted Barack Obama to their sizable fan bases, helping drive turnout among young voters to historic highs in 2008.

"This is something that is kind of inconceivable even 10 years before," Gosa said.

The "Hip Hop and Obama Reader" provides an analysis of the intersection of presidential politics and modern African American culture. The book was released last October by Oxford University Press.

In their address at Old Dominion, the authors noted how Obama's relationship to hip-hop changed after he won the White House.

Facing criticism from pundits and the public for embracing music that some said promotes violence and hate, Obama was far more nuanced in professing his support for the music after his historic 2008 victory. An iTunes playlist released by President Obama contained 29 songs. Several were country songs. None was hip-hop.

Rap icon Jay Z recorded a commercial for the 2012 Obama re-election campaign, but was dressed in a conservative suit and spoke about how he pulled himself up by his bootstraps.

"President Obama wanted the public endorsement from Sean Carter, not Jay Z," Nielson said, referring to the rapper's birth name. "The message he was speaking about could have just as easily been a Republican one."

The keynote speakers pointed out that Obama's shift in tone was noticed by hip-hop artists, many of whom made critical statements as the president was seeking re-election.

"The Hip Hop and Obama Reader" was the keynote event during a month-long celebration at the university, under the theme "Hallowed Grounds: Sites of African American Memories."

For more information about Black History Month and other inclusive programming at Old Dominion University, visit the Office of Intercultural Relations website.