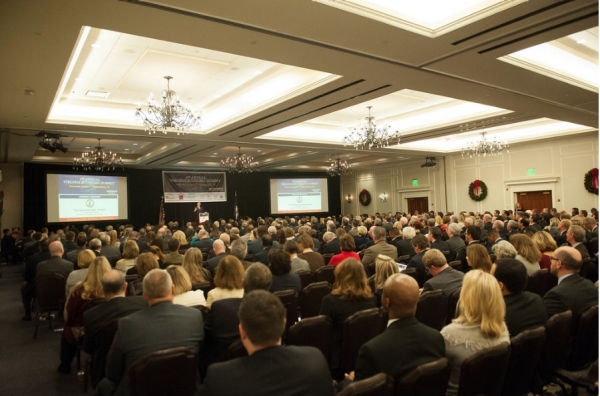 A sold-out gathering of more than 700 heard the presentation by the Old Dominion economists. 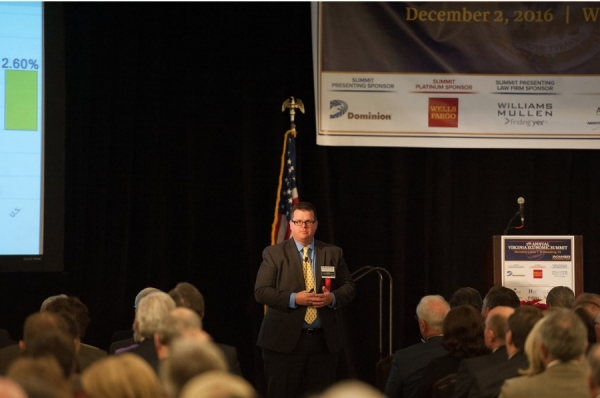 Bob McNab of ODU's Center for Economic Analysis and Policy presents about economic growth at the city level.

WILLIAMSBURG - A sellout crowd of more than 700 heard a sobering vision of Virginia's economy from Old Dominion University researchers, who presented the second annual State of the Commonwealth report Dec. 2.

Sponsored by the Virginia Chamber of Commerce and produced by Old Dominion's Center for Economic Analysis and Policy (CEAP), the report is intended to provide data-based guidance and suggestions to influencers and policymakers statewide. It was unveiled to an audience of business leaders as part of the chamber's Virginia Economic Summit.

The researchers did not offer rosy news.

Presenting data on the economic picture for the commonwealth, Filer noted that Virginia's recovery from the Great Recession of 2007 to 2009 has been far slower than that of the United States as a whole. And the CEAP is forecasting growth for Virginia of less than 2 percent for each of the next two years, significantly below the national average.

"Quite frankly, we have not kept up. I wish I had better news, but I don't," Filer said.

Bob McNab, professor of economics and deputy director of the CEAP, showed data breaking down the economic recovery by region. The results were uneven, with Northern Virginia and the Richmond area rebounding smartly, while other regions equaled or lagged pre-recession employment levels.

"The story is one of a larger struggle in other metropolitan areas," McNab said.

The State of the Commonwealth report was launched in 2015 as an extension of the influential State of the Region reports produced since 2000 about Hampton Roads by James V. Koch, Board of Visitors Professor of Economics and president emeritus of Old Dominion University.

Koch delved into a few chapters in this year's report for the Williamsburg audience, particularly the rise in single-parent households and declining labor force participation rate.

The latter issue, which is being driven not just by an increase in retirees, is something every state will have to reckon with, Koch cautioned. "Non-participation in the workforce is an expensive thing, and if we don't improve it, we're definitely going to feel the drag on our economy."

The events are all hosted by the Virginia Chamber of Commerce.

Following the ODU economists' presentation, the Virginia Chamber Foundation Economic Dashboard was unveiled. It showed how Virginia stacks up nationwide in a range of economic factors. Bob Holsworth, managing principal of DecideSmart, also analyzed Virginia's political climate and what to expect in 2017. A panel featuring Virginia chamber president Barry DuVal kicked off "Blueprint Virginia 2025" with a text-message survey of audience members identifying priorities for long-term economic growth in Virginia.

The event also featured remarks from Virginia's declared candidates for governor next year.

The State of the Commonwealth report has eight chapters:

The Virginia economy in transition: The commonwealth is experiencing relatively slow economic growth as it gradually transitions to a private-sector focus.

Northern Virginia: Turning the Corner? Recent growth in professional and business services employment suggests that the region may be moving toward a more diverse, private-sector-oriented economy.

The Hotel Industry in the Commonwealth: Occupancy rates have yet to recover to pre-recession levels as the hotel economy struggles.

Will Robots Take Your Job? A Look at Virginia's Opportunities and Vulnerabilities: A recent study found that 47 percent of current jobs are susceptible to loss because of automation and the use of artificial intelligence.

Broadband in Virginia: Vital for Economic Development: Robust broadband access now is as important as roads, bridges and airports in terms of economic development and population growth.

Stock Car Racing in Virginia: The Sport and the Business: While stock car racing remains an important economic phenomenon, attendance and revenue data at Virginia's nine racetracks suggest that it has fallen from its peak of popularity.

Liberty University: A Higher Education Phenomenon: Christian-centered Liberty University has a combined on-campus and online enrollment of more than 100,000 students and has accumulated an endowment of $1.4 billion.