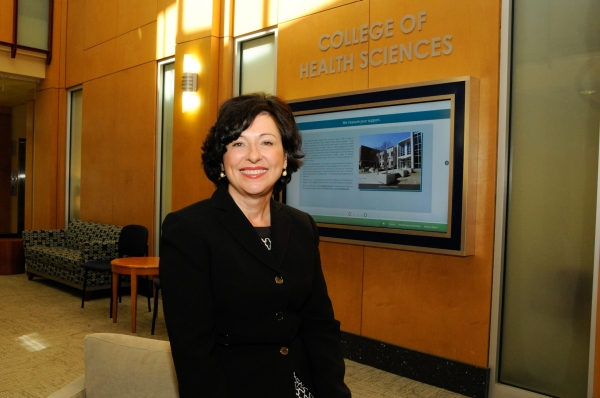 As a young girl, Shelley Mishoe learned the importance of teamwork from a family immersed in playing music, singing, dancing and songwriting. The first paying jobs for Mishoe and her siblings were in the family band.

Mishoe admits suffering from stage fright as a child, but the music helped her work through those fears while preparing her for bigger pursuits.

"The band taught me a lot about teamwork, preparation, delivery, composure and overcoming fear," she says.

About five years ago, Mishoe brought those same traits - which she has honed over the years - to Old Dominion University, becoming the fourth dean of the College of Health Sciences. At the end of the fall semester, she will step down as dean. Richardean Benjamin, the associate dean of education for the college, will serve as interim dean starting in January.

Since Mishoe started as dean, the college has launched several initiatives, including the Center for Global Health, Monarch Physical Therapy, the Interprofessional Education program, a master's degree in athletic training and a Ph.D. in kinesiology and rehabilitation.

"With support of the community and campus, our fundraising, revenues generated and research have doubled and tripled since I became dean," she says. "At the same time, our student credit hours generated has increased, partly because of partnerships with other organizations."

When she arrived at ODU, "the atmosphere was welcoming and supportive," she says, but it lacked transparency. Mishoe helped advance collaboration by conferring with chairs before enlisting faculty members to help with a new initiative or serve on a committee. "Since it is the chairs who are responsible for faculty workload and for annual reviews, I respect that they know best whether someone can take on something new," she says.

Communication was another issue that Mishoe tackled. She started a weekly letter to the faculty. It evolved into monthly newsletters, an annual report, updated web pages, a blog, and Facebook and Twitter accounts. She also spent considerable time networking in the community to build opportunities and visibility for the college.

"This past year alone, we had three faculty promoted to full professor. The college has also doubled its level of extramural grant funding," she says. "It is rewarding to see ideas translate into action and then positive results. Helping the college to overcome challenges is one of the best parts of being dean."

Mishoe grew up in the Tipperary Hill neighborhood in Syracuse, New York. The area is known for traffic lights with the green light at the top instead of bottom - a signal of Irish pride. When the city installed traffic signals in 1925, local Irish youths, incensed that the "British" red appeared above the "Irish" green, destroyed the lights with rocks until the state in 1928 allowed green to be on top in that area. It remains that way today.

Mishoe says she grew up wanting to be in health care but wasn't sure what field. A high school math teacher mentioned respiratory therapy. When she found out that nearby Upstate Medical University offered the degree, Mishoe jumped at the opportunity. She received her associate and bachelor's degrees at Upstate Medical. After getting her master's in education at Augusta State University, Mishoe was awarded a Ph.D. in adult education at the University of Georgia in 1994.

"When I began my full-time teaching career, I was only a couple of years older than most of my students, and several times I was actually younger than some students," she says. "My mom says I was mature and responsible even before kindergarten. So I guess it came naturally to me."

Mishoe has come a long way from the little girl from Syracuse with stage fright. Throughout her career in health care, she has eagerly grabbed the mike. It all goes back to family, she says.

"My family means a lot to me, and I have emulated those family values and commitments in my various leadership roles," Mishoe says. "Sometimes I feel like I am actually getting younger, at least younger at heart. ... I have begun to put personal priorities before professional priorities, which is new for me. Life is short; we need to make sure we live life to the fullest at home and at work."

Mishoe says she would like to be remembered "as the dean who supported her faculty, staff and students to become the best they could."