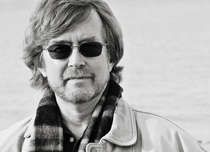 Joe Jackson, who holds the Mina Hohenberg Darden Chair in Creative Writing at Old Dominion, has been named a semifinalist for the 2017 Pen American Literary Awards for his biography of Black Elk, a Native American holy man.

"It's fantastic news that Joe is a PEN semifinalist," said John McManus, director of the University's master of fine arts program in creative writing. "'Black Elk' is an important book, and I'm thrilled it's getting the recognition it deserves. We're lucky to have a biographer of his stature on the creative writing faculty."

"Black Elk: The Life of an American Visionary," published by Farrar, Straus and Giroux, chronicles the Sioux healer who participated in the Battle at Little Bighorn and once traveled to Europe with Buffalo Bill's Wild West show. He adopted Catholicism in his 40s, and in his later years blended the Catholic religion and Native American traditions.

"He starts performing the old dances again," Jackson said in an interview in the fall 2016 issue of Monarch magazine. "He's gone back to the old ways, but he's still a Catholic."

The PEN awards are among the most prestigious in publishing. Jackson's book was one of 10 named to the "longlist' for the PEN/Jacqueline Bograd Weld Award for Biography. The finalists will be announced on Jan. 18 and the winner on Feb. 22.

Jackson has written one novel and six nonfiction books, including "The Thief at the End of the World," which was named one of Time magazine's top 10 nonfiction books of 2008, as well as "Leavenworth Train," a finalist for the 2002 Edgar Award for Best Fact Crime book.