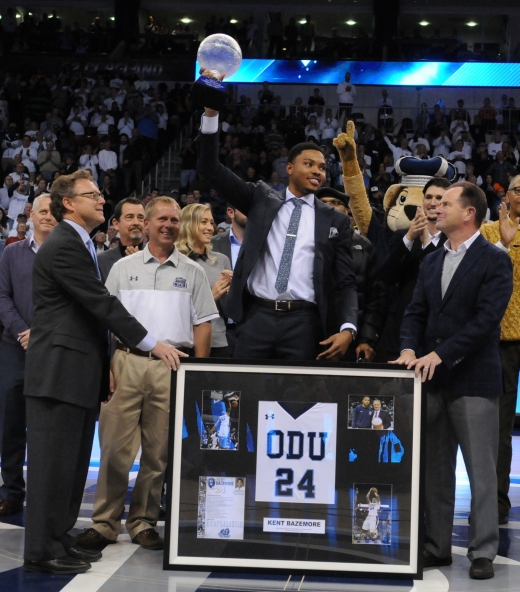 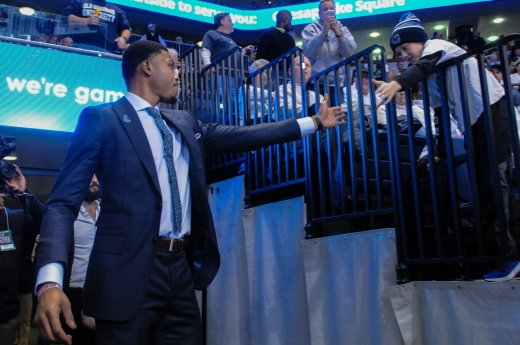 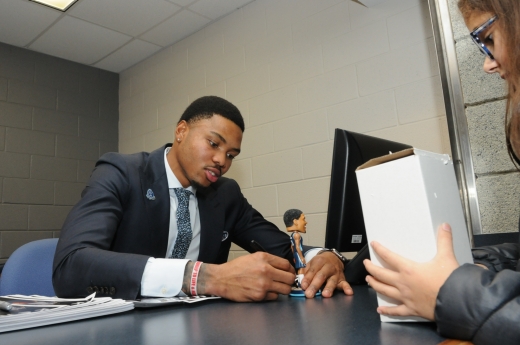 (For two seasons, Brendan O'Hallarn was the official team blogger for Old Dominion University men's basketball. Kent Bazemore was one of the stars of those Monarch teams, which played in consecutive NCAA tournaments. The Ring of Honor induction ceremony for Bazemore on Dec. 10 was reason enough to bring the blog back for one more entry.)

The roar of the crowd at the Constant Center drowned out the last part of the introduction.

Kent Bazemore, former Monarch basketball star now starting for the NBA's Atlanta Hawks in his fifth NBA season, returned to his alma mater, where his No. 24 jersey was added to Old Dominion's Ring of Honor. Old Dominion gave the then-gangly kid from Kelford, North Carolina, his only scholarship offer in 2007.

"To be up on the Ring of Honor with those legends like Leo Anthony, Odell Hodge, Nancy Lieberman -- I can't tell you what it means to me," Bazemore said during a halftime ceremony at Saturday's game against arch-rival Virginia Commonwealth.

The crowd chanted "O - D - U!" and for one night, it felt as if Bazemore were back in the Monarch lineup. One thing is certain: He created memories for Monarch fans that won't soon fade.

Jim Corrigan is now an assistant coach under Karen Barefoot for the Lady Monarchs, who won their own big game against VCU over the weekend, 70-60. During Bazemore's time with the Monarchs, Corrigan was associate head coach under Blaine Taylor. Memories flooded back throughout Saturday's game.

Corrigan said Bazemore is scarcely recognizable from the 155-pound freshman who arrived on the ODU campus. "But two things haven't changed: the engaging personality with the infectious smile that is contagious, and the tremendous competitive desire that has fueled his journey from unknown recruit to NBA starter," Corrigan said.

Bazemore made an indelible impact, with steals and breakaway dunks that thrilled a packed Constant Center. Corrigan said that on-court success was fueled by his desire to get better every single day.

"He worked on the court, he worked in the weight room, and he worked in the classroom, smiling every step of the way," Corrigan said. "Spring, summer and fall, outside of the season, I will always remember how hard he worked. And know that it is no accident that he is where he is."

Ask an ODU fan for a favorite Bazemore memory, and then take a seat. You'll be listening for a while.

Morris remembered that during Bazemore's redshirt year (he didn't play his first season on scholarship at Old Dominion) there was a kid mopping the floor during timeouts. "After he was done, Bazemore gave him the biggest high five and smile. I remember thinking, 'I like that guy,'" Morris said.

Decker saw Bazemore play before he even suited up for the Monarchs in the 7 Cities Basketball Pro-Am, an annual summer tournament featuring many of the region's top players.

"I went looking for him, but what I really remember is (teammate) Ben Finney's mom," Decker said. "People had started calling Kent 'Baze,' but Ben's mom called him 'Bertie' (his home county in North Carolina). I remember hearing 'Come on, Bertie!!' I still call him that sometimes."

Long-time Virginian-Pilot sportswriter Ed Miller took over the ODU men's basketball beat in time for Bazemore's sophomore season. The personable, athletic Monarch soon made an impression on the veteran journalist.

"Kent was always such an earnest striver. He got better each season, and no one outworked him. He had a clear idea of where he wanted to go and how to get there," Miller said.

The journalist remembers Bazemore telling him about how he wanted to get involved in the NBA Cares charitable organization when he was a pro. It was a bold statement for a player still in college, "but he was sure he would make the league."

Miller has written occasionally about Bazemore since he made the NBA, including Saturday's profile from the Ring of Honor induction.

"I remember driving through Kelford, North Carolina, trying to get a sense of where he came from ... I drove into Kelford and one of the first businesses I saw was a restaurant called 'Bazemore's.' I'm no detective, but I thought it might be owned by a relative. It was Kent's uncle, and he had a clipping from a story about Bazemore at ODU on the wall," Miller said.

"Years later, at one of Kent's camps in Bertie County, I walked in to find him watching a video of a game from his junior year at ODU. I think that might have been his favorite season, and it was arguably the best team he played on."

Several members of that 2010-11 team, which won the Colonial Athletic Association tournament and lost to Butler at the buzzer in the first round of the NCAA tournament, attended Saturday's game to support their former teammate.

Good friend Darius James was in Bazemore's recruiting class, and is back at the University working for the Old Dominion Athletic Foundation. He remembers that initial redshirt season, when "practices were games for Kent."

One day, Coach Taylor was criticizing Bazemore for not being tough enough to play through an injury.

"That made him mad," James said. "He was in street clothes, and he went and got changed. First possession, he stole the ball and dunked on somebody. Then he did it again. He just wanted to show Coach."

James said that competitive fire was present in every game and every practice during their four years as teammates. He isn't surprised that Bazemore achieved his dream.

Chris Crowley applauded with an arena full of ODU fans during Bazemore's Ring of Honor ceremony. And he spent Bazemore's entire ODU career rooting against him, as a fan of VCU.

Crowley admired Bazemore's game. "Kent Bazemore is that quintessential guy you wish was on your team," especially since his game suited the up-tempo style that VCU played, Crowley said. "Those games from 2009 to 2011 were really special, and he was a big part of the rivalry."

Rick Henn also didn't cheer during Bazemore's games at the Ted. But not because he wasn't excited.

A long-time member of the scoring crew who sits on the sidelines during home games, Henn had, literally, the best seat in the house for Bazemore's heroics. And as a courtside official, he wasn't allowed to cheer.

Henn said Bazemore said "please" every time he checked into a game. "He was always polite, and not every player is that way." He said Bazemore also made a habit of going down the row and fist-bumping courtside officials before tipoff of every game. "He just has always had that winning personality."

A pre-autograph session before the VCU game went into very long overtime, as hundreds of young and old ODU fans queued up for signatures and selfies. This fact did not surprise Maceo Harrison. Harrison started in game operations at the Constant Center when Bazemore started his career.

"Kent is one of those guys who always had time for everyone. He'd know your name, shake your hand. He was always so personable," Harrison said.

The only letdown from Saturday's event was the score itself. The Monarchs let a late lead slip away and fell 67-64 to their hated rivals. But that put little damper on the festivities in a sold-out Constant Center.

Bazemore reflected about how far he had come, and how Old Dominion played a huge role in how he became the leader, basketball star and person he is today.

"I can't even repay what this school has done for me," Bazemore said. "I came here as a 17-year-old, and I saw it all and did a lot. I believe in everything they want to do here at Old Dominion, and I want to do what I can to help them move forward."