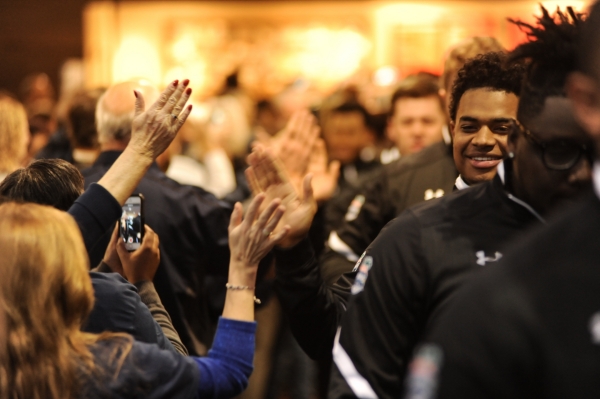 The Monarchs make their way through a tunnel of fans.

The ODU football Monarchs received a warm send-off Monday morning from an enthusiastic crowd before leaving to play their first-ever bowl game against Eastern Michigan University in the Bahamas.

A crowd of several hundred fans gathered, along with Big Blue, the ODU Marching Monarchs and ODU Cheer, in the Webb University Center for a short celebration before the team boarded buses for Norfolk International Airport.

Sen. Mark Warner, the Virginia Democrat, announced a friendly wager he has made with Sen. Debbie Stabenow of Michigan on the outcome of the Popeyes Bahamas Bowl, which will be held Friday, Dec. 23 at 1 p.m.

Warner held up a bottle of beer from O'Connor Brewing, saying he has bet a case of the locally brewed beer on the outcome of the game with Stabenow.

If the Monarchs defeat Eastern Michigan in the game, Warner will receive a case of beer from Arbor Brewing Company Microbrewery in Ypsilanti, Michigan.

Warner noted that a decade ago, the thought of a bowl game sendoff for Old Dominion University was unfathomable.

"I remember eight or nine years ago when people said football at ODU wouldn't work. Well, look at the Monarchs now," Warner said.

Bobby Wilder is only coach of the current incarnation of Old Dominion football, helping bring football back at the University after a 69-year absence.

Wilder talked about the team's journey to the bowl game, while highlighting some of challenges and rewards that came along the way.

"This is special for all of us. This is something we've never experienced. Look where we are standing right now," Wilder told the team. "Look at all these people who are here to support us. We are incredibly grateful."

The Monarchs won eight of their last nine games and finished their season 9-3.

"We've been here for eight years. We're considered to be the best startup program in the history of college football with 9 and 3 and we feel like it's only going to get better," Wilder said.

President John R. Broderick noted that in addition to being stars on the field, the Monarchs have been over-achievers in the classroom, and the community. Broderick singled out senior linebacker T.J. Ricks, to whom he presented his BS in engineering during Saturday's 125th commencement exercises.

"We have come a long way as a program," President Broderick said.

"It is impressive the Monarchs are bowl-bound in just their eighth season of football, and I'm confident ODU will defeat EMU for the third time in three years," Warner said.

The Monarchs take on Eastern Michigan on Friday, Dec. 23 at 1 p.m. The game airs coast-to-coast on ESPN.