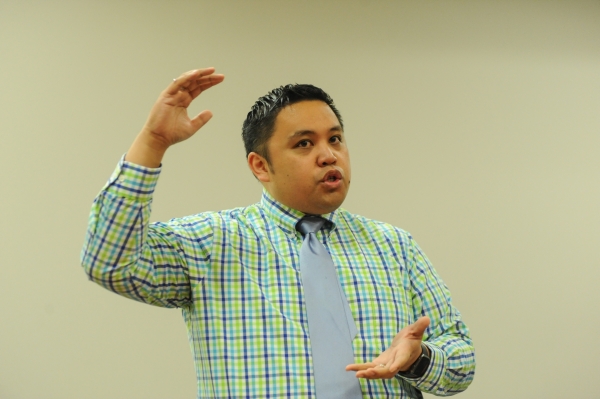 It's been more than 50 years since the 1962 Ash Wednesday storm, but the related flooding still lives large in the memories of some Norfolk residents.

The epic storm and others including the recent Hurricane Matthew were discussed during a meeting Tuesday in Webb University Center. The session, which featured Norfolk planner Robert Tajan, allowed Norfolk residents and ODU faculty and staff members to review new Federal Emergency Management Agency flooding maps, which will take effect in February.

"We were very pleased to see members of the campus community and our neighbors come out to ask Mr. Tajan questions about flood risk and how to prepare for future storms," said Michelle Covi, assistant professor of practice in the Department of Ocean, Earth and Atmospheric Sciences. "Our hope is that this information helps to encourage us all to become more resilient as we face sea level rise and changing weather patterns."

Flood insurance can be complicated, but the group discussed ways to help mitigate the risks. Among the suggestions:

There is no magic bullet for flooding mitigation, but the city is working on answers, Tajan said. Often, homeowners can provide the best solutions to their own problems because of their knowledge of surrounding property.

Those problems are occurring more often. "Over the last 10 years, we haven't had storms as large as the Ash Wednesday storm, but we have had more strong storms...We're getting storm events that affect people more frequently," said Tajan, zoning administrator for the City of Norfolk.

This was the second event to discuss map changes, and the first on ODU's campus. About 25,000 people are affected by the change, with a net 600 properties dropping off a flood zone, Tajan said. But that doesn't mean that they will automatically be safe. Twenty-five percent of flooding events take place outside a flood zone.

The event was part of a larger initiative to build community resilience through the Commonwealth Center for Recurrent Flooding Resilience, Race 2 Ready and the ODU Resilience Collaborative.

The City of Norfolk and many other cities in Hampton Roads participate in the National Flood Insurance Program (NFIP), which allows residents to purchase flood insurance. Participation in the NFIP requires cooperation with FEMA in terms of flood plain management ordinances and Flood Insurance Rate Maps (FIRM), which show Special Flood Hazard Areas (SFHA).