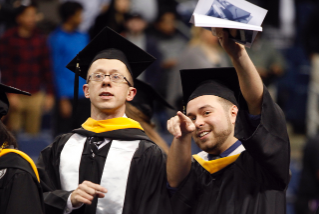 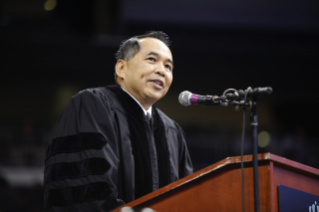 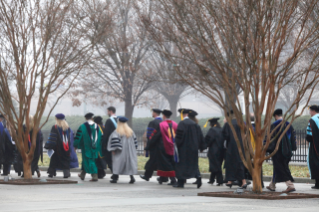 Old Dominion University's 125th Commencement exercises were filled with inspiration and moments of joy as graduates walked across the seal to the Ted Constant Convocation Center on Saturday, Dec. 17.

Nearly 1,600 bachelor's, master's and doctoral degrees were awarded, a record for fall commencement at the University.

At the 9.a.m. ceremony, graduates of the Batten College of Engineering and Technology, Darden College of Education and College of Sciences, heard inspiring words from Rear Admiral Peter A. Gumataotao, chief of staff, strategic plans and policy with Supreme Allied Command Transformation in Norfolk.

Molly Ward, Virginia's secretary of natural resources, spoke to graduates of the College of Arts & Letters, the Strome College of Business and the College of Health Sciences in the afternoon ceremony.

A native of Guam, Gumataotao is a 1981 graduate of the U.S. Naval Academy and earned his master's degree in strategic studies from the U.S. Naval War College in 1994.

Gumataotao addressed the graduates by saying "Hafa Adai" (pronounced half a day), which means hello in Guam. He then told the graduates to embrace every moment of their accomplishment.

"I want you to bottle that sense of self worth, sense of accomplish and that sense of inspiration. I will tell you that it doesn't end here. Whatever your goal is, my message to the graduating class of 2016 is very simple, never stop learning," Gumataotao said.

He also offered three points of advice they could take with them as they venture into the next phase of their careers.

The first one was accepting the fact that no one knows everything, second, in life there will be changes but it's a learning experience and lastly, to keep an open mind by not being afraid to fail.

A surface warfare officer, Gumataotao has deployed extensively to the Western Pacific, Indian Ocean and Arabian Gulf. Ashore, Gumataotao served as assistant surface operations officer and surface systems analysis officer for Commander, U.S. 3rd Fleet; a fellow for the Chief of Naval Operations Strategic Studies Group at the Center for Naval Analysis in Washington; a congressional liaison for surface programs at the Navy Office of Legislative Affairs, and chief of staff for Naval Surface Forces.

Ward, a former mayor of Hampton, was nominated as secretary of natural resources in 2013 by Gov. Terry McAuliffe and confirmed in 2014.

Ward, gave the graduates what she called, her secret 10 rules of success. Being prompt, understanding that no job is too big or too small and being kind were among the list.

"Always be kind to everyone. I mean everyone, the janitor, the clerk at target, the person who wants to get in front of you on the interstate because you never know when it will come back to bite you if you don't and you never know what reward you might receive for being nice," Ward said.

She also told a story about a woman who once worked for her. Ward said the woman wasn't kind to a co-worker and one day that same co-worker was the woman's interviewer at her next job. She reminded graduates how important it is to build relationships through life and their careers.

Ward is a native of Hampton and a graduate of the University of Virginia and the William & Mary Law School. She has handled a wide range of cases involving environmental issues, land use and planning.

Ward served as the elected treasurer for Hampton from 2002 to 2008, reworking operations to focus on customer service and measurable results. She eliminated lines and increased collection rates by double digits, to almost 100 percent.