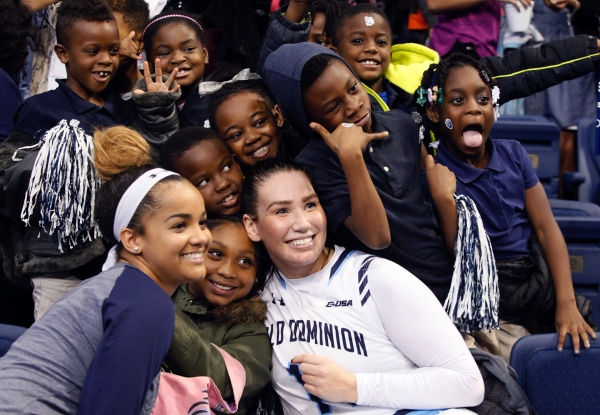 Students from Bayview Elementary School sang the National Anthem before the game, and Sewells Point Elementary School students performed at halftime. It wasn't long before most people in the crowd began to raise their hands and shake their hips for ODU's famous game day dance "Ice Cream and Cake."

"The message was how important education is. My journey really inspired me. Some of these kids have never been to a college campus, and it's all about planting that seed to get them to further their education," Barefoot said.

Barefoot was introduced to a similar Education Day on a second-grade class trip to Christopher Newport University. At the time, she didn't know she would eventually become one of the youngest head coaches at age 22. Since joining Old Dominion in 2011, she's encouraged her team to be good not only on the court but also off it.

"If our athletes can show we care about them, then they will work a little harder. I tell my girls I want them to always work to inspire. You never know who's watching you. I want kids to believe in themselves and know this could be them one day."

The Lady Monarchs defeated Dartmouth, 82-56, for their third win for season. The team will go to the University of Miami for its next game Sunday.